Unleashing the Beast. Aleister Crowley, Tantra and Sex Magic in Late Victorian England Hugh Urban Ohio State University If this secret [of sexual magic], which is a scientific secret, were perfectly understood, as it is not by me after more than twelve years' almost constant study and experiment, there would be nothing which the human imagination can conceive that could not be realized in practice. -- Aleister Crowley[1] What is peculiar to modern societies is not that they consigned sex to a shadow existence, but that they dedicated themselves to speaking of it ad infinitum, while exploiting it as the secret. -- Michel Foucault[2] Aleister Crowley stands out as one of those remarkably enigmatic characters who has had a tremendous impact on contemporary new religious movements, esotericism and occultism, even as he has been almost entirely ignored by academic scholarship.

But the question remains: how much did Crowley actually know either first hand or second hand about Indian Tantra? I. II. It is sex. -- D.H. V. Coitus reservatus. Coitus reservatus (coitus, "sexual intercourse, union" + reservatus, "reserved, saved"),[1] also known as sexual continence, is a form of sexual intercourse in which the penetrative partner does not attempt to ejaculate within the receptive partner, but instead attempts to remain at the plateau phase of intercourse for as long as possible avoiding the seminal emission. 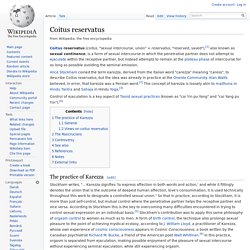 Alice Stockham coined the term karezza, derived from the Italian word "carezza" meaning "caress", to describe Coitus reservatus, but the idea was already in practice at the Oneida Community. Alan Watts believed, in error, that karezza was a Persian word.[2] The concept of karezza is loosely akin to maithuna in Hindu Tantra and Sahaja in Hindu Yoga.[3] Control of ejaculation is a key aspect of Taoist sexual practices (known as "cai Yin pu Yang" and "cai Yang pu Yin").[4] Slow Penetration. To obtain perfect sexual continence you must begin intercourse with a transfigurating vision of the erotic attraction between man and woman and maintain this transfiguration throughout lovemaking. 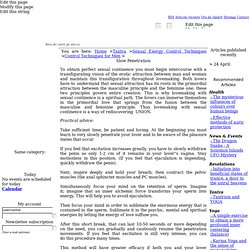 Both lovers have to understand that sexual attraction has its roots in the primordial attraction between the masculine principle and the feminine one; these two principles govern entire creation. This is why lovemaking with sexual continence is a spiritual path. The lovers can immerse themselves in the primordial love that springs from the fusion between the masculine and feminine principle. Thus lovemaking with sexual continence is a way of rediscovering UNION. Practical advice: Take sufficient time, be patient and loving. If you feel that excitation increases greatly, you have to slowly withdraw the penis so only 1-2 cm of it remains in your lover''s vagina. Next, inspire deeply and hold your breath; then contract the pelvic muscles (the anal sphincter muscles and PC muscles). Attention! TANTRA (SEXUAL YOGA) Taoist techniques for men - All About Tantra. Previously we presented different techniques for control over the sexual energy. 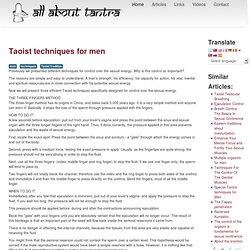 Why is this control so important? The reasons are simple and easy to understand. A man's strength, his efficiency, his capacity for action, his vital, mental and spiritual resources are in close connection with his potential sexual energy. Now we will present three efficient Taoist techniques specifically designed for control over the sexual energy. THE THREE-FINGERS METHODThe three-finger method has its origins in China, and dates back 5,000 years ago. HOW TO DO IT:A few seconds before ejaculation, pull out from your lover's vagina and press the point between the anus and sexual organ with the three longer fingers of the right hand. First, locate the exact spot: Press the point between the anus and scrotum - a "gate" through which the energy comes in and out of the body. Next, use all the three fingers: (index, middle finger and ring finger) to stop the fluid. PRACTICAL ADVICE1. 2. 3. 4. 5. The Kundalini. Details Written by Samael Aun Weor Kundalini is the fire of the Holy Spirit. 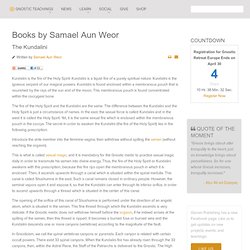 Kundalini is a liquid fire of a purely spiritual nature. Kundalini is the igneous serpent of our magical powers. Kundalini is found enclosed within a membranous pouch that is nourished by the rays of the sun and of the moon. The fire of the Holy Spirit and the Kundalini are the same. Introduce the virile member into the feminine vagina, then withdraw without spilling the semen (without reaching the orgasm).

This is what is called sexual magic, and it is mandatory for the Gnostic medic to practice sexual magic daily in order to transmute his semen into divine energy.