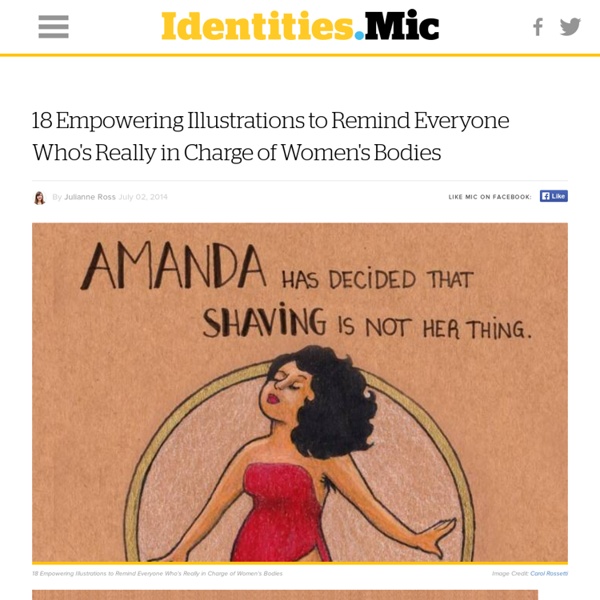 Image Credit: Carol Rossetti When Brazilian graphic designer Carol Rossetti began posting colorful illustrations of women and their stories to Facebook, she had no idea how popular they would become. Thousands of shares throughout the world later, the appeal of Rosetti's work is clear. Much like the street art phenomenon Stop Telling Women To Smile, Rossetti's empowering images are the kind you want to post on every street corner, as both a reminder and affirmation of women's bodily autonomy. "It has always bothered me, the world's attempts to control women's bodies, behavior and identities," Rossetti told Mic via email. "It's a kind of oppression so deeply entangled in our culture that most people don't even see it's there, and how cruel it can be." Rossetti's illustrations touch upon an impressive range of intersectional topics, including LGBTQ identity, body image, ageism, racism, sexism and ableism. "I see those situations I portray every day," she wrote.

When Edward Gorey Illustrated Dracula: Two Masters of the Macabre, Together by Maria Popova “No man knows till he has suffered from the night how sweet and dear to his heart and eye the morning can be.” As if knowing that the great Edward Gorey illustrated a small stable of little-known and wonderful paperback covers for literary classics weren’t enough of a treat, how thrilling it is to know that he also illustrated the occasional entire volume, from classic fairy tales to H. G. Wells’s War of the Worlds to T.

What the Perfect Female Body Looks Like — When You Ask Men vs. Women They say beauty is in the eye of the beholder – and according to a new survey, it looks like men and women are very different beholders indeed. U.K. lingerie company Bluebella surveyed 1,000 men and women to see which celebrities each gender considered to have the ideal physical traits. It then Photoshopped Frankensteinian composites of different celebrities' parts to create "the perfect body." The result? Men and women have wildly different views on the ideal female body, though their thoughts on the male form are much more similar.

Sound is a Pressure Wave The Nature of a Sound Wave Sound is a Pressure Wave Sound is a mechanical wave that results from the back and forth vibration of the particles of the medium through which the sound wave is moving. If a sound wave is moving from left to right through air, then particles of air will be displaced both rightward and leftward as the energy of the sound wave passes through it. The motion of the particles is parallel (and anti-parallel) to the direction of the energy transport. This is what characterizes sound waves in air as longitudinal waves . Boobs! (Not a Big Deal) I would like for you to take a good look at that picture for a moment. You see a baby, the top part of a breast, and some bacon. Are you offended?

'Stop The Beauty Madness' Brands Ads With Brutally Honest Messages It's a psychological itch that the most enlightened, successful and even beautiful women still tend to scratch: if I look better, I am better. Now one campaign is trying to convince others to break free from that line of thought. The Stop The Beauty Madness campaign wants you to "feel like you've been socked in the gut" when you see its jarringly frank ads, says its founder Robin Rice. Stop The Beauty Madness is a series of 25 advertisements branded with honest messages that highlight the true "madness" involved in creating and meeting beauty standards.

Borgarbókasafn - Facts about the library Facts about the library Reykjavík City Library Overview 1. fork and flower: wild herb gathering remember the crazy chai pear and chocolate pudding tart...? that's when the collaboration (though, in all honesty, we stick to calling it 'playing around', actually) between photographer extraordinaire christine benz and my humble (aspiring food stylist, ahem) self started. by now, we're already two days, several hours of hard, sweaty work and a couple more insights on working together on food into this project. it's been fun, and continues to be. but let me explain what it is that you're seeing here. for now, no recipes (obviously). but some pictures of me (utterly unglamorous, in mornign manière, with a totes naked face, ugh, why do i never manage to jump out of bed earlier when i'm having my picture taken...? what you're still going to see from christine and i: a wild herb foam soup with lady's smock (color blocking in a soup, literally. i'm positive my fashion forward styler friend ki will adore this), a fancy rustic nettle bread (yeah, ouch!) for now, though, happy easter!

Portfolio — Wolf Form CO. INC. USA dress forms NJ/NYC Wolf Form Vintage Era Dress Forms 1911-1973 Wolf Form Vintage Model Year 1911 Dress Form. Wolf Form Vintage Dress Forms 1951 and 1911. Honor the Treaties: Cherokee Freedmen Complicate Native Rights Mantra: Page 3 of 3 Judge Hogan is now poised to make another landmark decision for Indian country—one that legal observers say will be much discussed for years to come. While it remains unclear which way his ruling will tilt, the weight of the issue boils down to treaty rights, and not just for the Cherokee or the freedmen, but in essence, for all of Indian country. Jon Velie, attorney for the Cherokee freedmen, argues that a ruling in favor of expelling his clients from the Cherokee Nation would be a ruling in favor of invalidating the Treaty of 1866.