Gun nation: a journey to the heart of America's gun culture – video. About the Guardian Bertha documentary partnership The Guardian is partnering with Bertha Foundation to tell international documentary film stories with global impact. 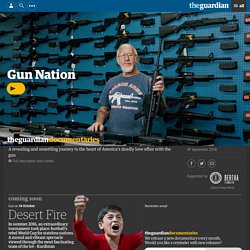 Bertha Foundation support activists, storytellers and lawyers who are working to bring about social and economic justice, and human rights for all. The Guardian and Bertha Foundation are commissioning a series of 12 short documentary films from independent filmmakers. The series covers global stories, with a focus on films that have the ability to advance the contemporary issues they address, and and raise awareness of people and movements who are catalysts for change. These documentaries help the Guardian audience to understand the world in creative, entertaining and surprising ways designed for a wide online audience. This unique collaboration involves the Guardian and Bertha Foundation engaging a network of film-makers with embedded access to, and deep knowledge of, the communities in which they are filming. Top Gun Lobbyist Calls Hundreds of Child Gun Deaths "Occasional Mishaps"

DIGIcal/iStockphoto In an in-depth investigation in 2013, Mother Jones found that guns kill hundreds of children per year in the United States. 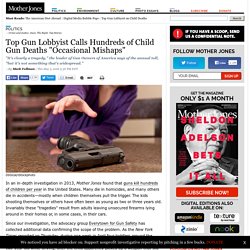 Many die in homicides, and many others die in accidents—mostly when children themselves pull the trigger. The kids shooting themselves or others have often been as young as two or three years old. Invariably these "tragedies" result from adults leaving unsecured firearms lying around in their homes or, in some cases, in their cars. Since our investigation, the advocacy group Everytown for Gun Safety has collected additional data confirming the scope of the problem.

Equally stark is the response from the gun lobby. "It's clearly a tragedy, but it's not something that's widespread," said Larry Pratt, a spokesman and former executive director of Gun Owners of America. As the Times piece notes, 27 states now have laws that hold adults responsible for letting unsupervised children get their hands on guns.

Why does nothing get done about gun control? The reasons Obama cannot change US infatuation with firearms. Barack Obama made no attempt to hide his anger at US gun laws in the wake of the latest mass shooting at Umpqua Community College. 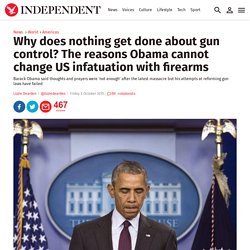 The US President gave a speech from the White House saying that thoughts and prayers were “not enough” to stop the successive rounds of carnage that have become “routine”. Saying there was a gun for roughly every man, woman and child in America, Mr Obama cited the UK and Australia as examples of countries that have responded to shooting massacres with effective gun control laws. “This is a political choice that we make, to allow this to happen every few months in America,” he continued.

“We collectively are answerable to those families who lose their loved ones because of our inaction.” Seeing the American President criticising his own country’s laws may seem hypocritical, but his calls for change have been continually frustrated by the powerful firearms lobby, political opponents and the US constitution itself. Lobbyists Political opposition. Gun Rights vs. Gun Control. Two suspects who opened fire in a California social services center on Dec. 2, 2015, killing 14 people and injuring 21, once again turned the national spotlight on the debate over gun ownership. 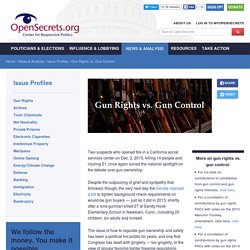 Despite the outpouring of grief and sympathy that followed, though, the very next day the Senate rejected a bill to tighten background check requirements on would-be gun buyers — just as it did in 2013, shortly after a lone gunman killed 27 at Sandy Hook Elementary School in Newtown, Conn., including 20 children, six adults and himself. The issue of how to regulate gun ownership and safety has been a political hot potato for years, and one that Congress has dealt with gingerly — too gingerly, in the view of groups favoring tighter firearms regulations. 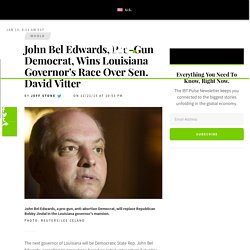 John Bel Edwards, according to projections based on initial voter return Saturday. The Associated Press called the election just hours after polls closed at 8:00 p.m. EST, with Edwards maintaining a solid lead over Republican rival, U.S. Sen. David Vitter. Edwards, a pro-gun, anti-abortion Democrat, will take term-limited Republican Bobby Jindal's seat in the governor's mansion. Republican Billy Nungesser, the former president of Plaquemines Parish, was elected lieutenant governor, defeating Baton Rogue Mayor Kip Holden. Vitter began running for governor nearly two years ago, though has been criticized for running an ugly campaign in which he trashed would-be Republican supporters on the way to the party's nomination.

Edwards, on the other hand, frequently reminded voters of his status as a West Point graduate, his time as an Army Ranger and highlighted a desire to oversee a functioning bipartisan state government.