How A Clever Kansas Play Went Viral And Took Over College Basketball. The Adjustment Bureau: How LaMarcus Aldridge Will Fit in With the Spurs « The Spurs have heard the fretting about LaMarcus Aldridge — how he holds the ball longer than any Spur is permitted to, hogs Tim Duncan’s territory on the left block, and cares in rather un-Spursy fashion about how many shots and points he averages. 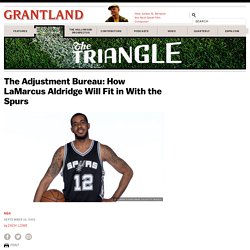 The Spurs got over all of that long ago. Brooklyn Seems to Be Getting Its San Antonio On Lately « Remember this, the most glorious possession from all of last season? 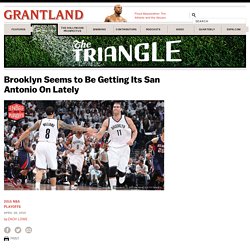 Well, check this out: Nets Don't "Stack" Up To Celtics In Blowout Loss. The Warriors Ran A Beautiful Play For An Alley-Oop Last Night. Ball-movement.gif (573×310) We Went There: Thoughts From Miami « The Pacers are at risk of becoming one of those teams people remember as a character in another team’s story — the underdog full of aspiration that tests a champion, pushes it to be legendary, and fades into a victim’s role on that other team’s highlight reel. 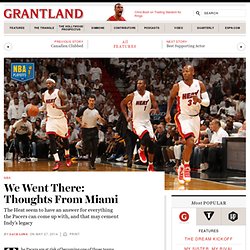 Princeton Fence. How Denver's Old Dribble-Drive Offense Could Be the Perfect Fit for the Revamped Pelicans. This has been an offseason filled with change for the New Orleans Pelicans. 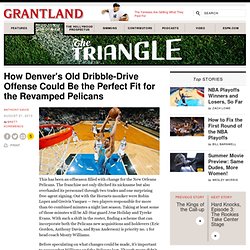 The franchise not only ditched its nickname but also overhauled its personnel through two trades and one surprising free-agent signing. Out with the Hornets moniker were Robin Lopez and Greivis Vasquez — two players responsible for more than 60 combined minutes a night last season. Taking at least some of those minutes will be All-Star guard Jrue Holiday and Tyreke Evans. With such a shift in the roster, finding a scheme that can incorporate both the Pelicans new acquisitions and holdovers (Eric Gordon, Anthony Davis, and Ryan Anderson) is priority no. 1 for head coach Monty Williams.

The 5 Elements of the Effective Spurs Offense. If you’ve tuned in to watch the San Antonio Spurs play at any point this season, you’ve no doubt heard an announcer gush over the team’s elegant offensive system. 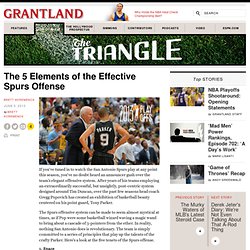 After years of his teams employing an extraordinarily successful, but unsightly, post-centric system designed around Tim Duncan, over the past few seasons head coach Gregg Popovich has created an exhibition of basketball beauty centered on his point guard, Tony Parker. The Spurs offensive system can be made to seem almost mystical at times, as if Pop were some basketball wizard waving a magic wand to bring about a cascade of 3-pointers from the ether. In reality, nothing San Antonio does is revolutionary. Game 5 Preview: Four Keys to the Most Important Night of the Season - The Triangle Blog. There have been so many possessions in this series during which I’ve thought to myself, It is shocking that the Kings are in the same professional basketball league as these two teams.

You could substitute a half-dozen or so teams in place of Sacramento; the Kings, for whatever reason, have been my go-to symbol of NBA incompetence and incoherence for at least three seasons, even as the Bobcats have trumped everyone with their sheer ability to lose games. Point being: These two teams are awesome . Part of my job is to apportion blame and credit — to watch and rewatch possessions for clues on what may have gone wrong three or four steps before a layup, what blip of confusion/laziness resulted in a profitable transition opportunity, or what spacing issues might have sabotaged an otherwise very nice offensive possession. In this series, that exercise has often resulted in a silent shrug.

No worries. And would you look at Indiana’s defense. It’s almost hard to blame West for being late. Ten burning questions for the upcoming Miami Heat-Indiana Pacers series. I t's fitting that the 2012-13 Heat, the best of the LeBron James–era Heat teams, must go through the Indiana Pacers to earn a chance at a repeat title. It was in last season's conference semifinal against the Pacers, after Chris Bosh's injury in Game 1 and some Dexter Pittman–size trial and error, that the Heat almost accidentally discovered their true destiny as a small-ball, 3-point-shooting machine. Dwyane Wade found his form in Game 4, LeBron worked his isolation post game brilliantly, the two teams traded flagrant fouls, and the Heat ripped off three straight wins while reworking their identity on the fly. The Bonner Effect: How Shutting Down the Spurs' Shooter Could Be the Key for the Grizzlies - The Triangle Blog.

Stopping the San Antonio Spurs offense, one of the league’s three best over the last three seasons combined, is always going to be a chore. Smart defenses can construct wonderful theoretical game plans centered around limiting the Spurs to midrange jumpers off Tony Parker pick-and-rolls by cutting off Parker around the foul line and staying home on San Antonio’s unfair army of deadly shooters.

And some of those smart defenses are good enough to actually execute that kind of game plan over long stretches, or even entire games. But the Spurs have top midrange shooters at key positions, and they are so good that over time they're going to find cracks in even the most well-meaning team defenses. Parker and Manu Ginobili, even this aging and limited version, are brilliant ball handlers who can slice through the gut of a defense with wily crossover dribbles, tiny bits of misdirection, and pinpoint passing. 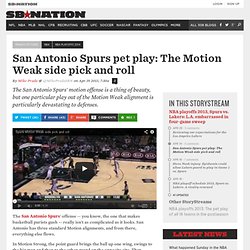 The San Antonio Spurs' offense -- you know, the one that makes basketball purists gush -- really isn't as complicated as it looks. San Antonio has three standard Motion alignments, and from there, everything else flows. In Motion Strong, the point guard brings the ball up one wing, swings to the big man and then to the other guard on the opposite site. That ultimately initiates a number of plays, including a pindown for the small forward and other staggered screen actions.

Chicago Bulls' pet play: The 4-out, 1-in curl. The Chicago Bulls have been manufacturing offense all season without Derrick Rose in the lineup. 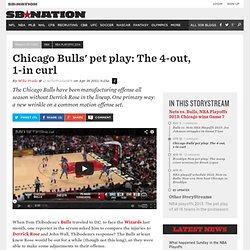 One primary way: a new wrinkle on a common motion offense set. How the Miami Heat went on a historic winning streak and came to dominate the league. The most important and perhaps improbable thing about the 2012-13 Miami Heat, and their monstrous 27-game winning streak, is how easily everything comes on offense now. 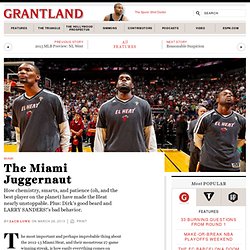 Miami leads the league in points per possession, and on the surface that’s not so surprising. The Heat have been a very good offensive team for three seasons, and they have the world’s greatest player, two more All-Stars, and an array of role players picked specifically because of how snugly they fit around those stars. And those stars are putting up crazy numbers — 52 percent–plus shooting for each of them, including an insane 55.7 percent from LeBron James, who should be the unanimous choice for MVP. Basketball Offense - Open Post Offense. From the Coach’s Clipboard Basketball Playbook, @ Like this page? 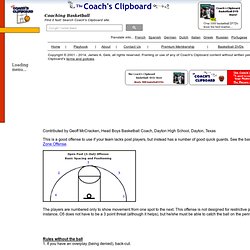 Please "Like", Tweet, Google +1, or Follow this. Thanks! The 5-Out Motion Offense: Overview and Key Rules. By adam.warner - Last updated: Wednesday, April 18, 2012 - Leave a Comment The 5-Out Motion Offense is a unique system that has proven to be extremely effective for longtime Villanova head women’s basketball coach Harry Perretta. 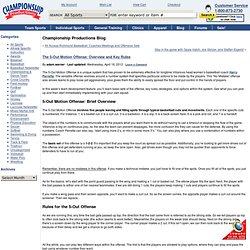 The versatile offense revolves around a number system that specifies particular actions to be made by the players. 4 Keys to an Effective Motion Offense. By Jeff Haefner, Breakthrough Basketball Motion offense is the most flexible offense in a coach's toolbox, but that flexibility only turns into production when each of the four key elements are in place. When your team has all four elements, they create an offensive attack that is more than a little difficult to stop. Key No. 1: Good Rules Make for Good Choices The "rules" in a motion offense are better thought of as rules-of-thumb.

5 Out Motion Offense - Cutters. Joe Haefner says: 11/7/2013 at 12:51:00 PM John, I would advise to play 3 on 3 if the girls are not athletic enough or skilled enough to run this offense. When I was faced with this same situation 10 years ago, I started my own league. My brother currently has a 3rd grade daughter and they've been playing 3 on 3 half court basketball for the same reasons you mention above. Basketball Motion Offenses, Tips, and Drills. Just for subscribing to our free newsletter you’ll get these 3 eBooks for free… 72 Basketball Drills & Coaching Tips – 136 page eBook. 21 Basketball Tips & Tricks for Players – 20 page eBook. 32 Winning Basketball Plays – 96 page eBook.

Plus you’ll get ALL updates to this website delivered to your inbox for free. Over 100,000 other coaches, players, & parents have already subscribed. We will never send you spam or share your email address, guaranteed! Close Types of Motion Offenses Though every coach tries to put his mark on the motion offense they run, there really are only 4 basic types. 5 Out Motion Offense.