Bloomberg: Apple will argue that the digital signature it uses to validate code is protected as free speech. Apple said yesterday that its legal battle with the FBI has such far-reaching consequences that it should be settled by Congress rather than by the courts – but if that tack is unsuccessful, Bloomberg reports that the company will be putting forward a rather unusual argument in court. 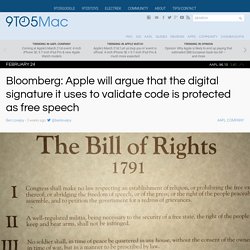 Apple will argue that the digital signature it uses to validate code is protected by the First Amendment as free speech, which cannot be compelled in law. Before you download a new game or messaging app on your iPhone, the device checks for a digital signature tucked within the lines of code on the app. All applications sold through the App Store are approved by Apple and have this cryptographic autograph from the company telling your iPhone it’s safe.

In the FBI case, some privacy advocates believe the company has a strong First Amendment case because it’s being asked to add that signature, against its will, to software that would aid the government. Apple vs. the FBI: The legal arguments explained. Apple has raised some interesting, and potentially winning, legal arguments in its motion to overturn a judge’s order requiring the company to help the FBI unlock the iPhone of a mass shooter. 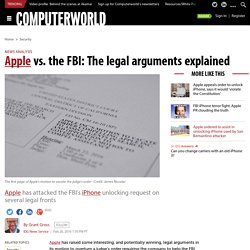 The FBI's request for Apple to write new software to defeat password protections on the phone violates the company’s free speech and due process rights, Apple argued Thursday in its motion to vacate Magistrate Judge Sheri Pym’s Feb.16 order. Apple has a chance to prevail in court, especially with its First Amendment free speech argument, said Jennifer Dukarski, a technology lawyer with the Butzel Long law firm in Ann Arbor, Michigan. Several past court cases have looked on software code as a form of speech, although the legal record is mixed, she said. Apple argues the court cannot force speech from the company, particularly when the speech would be against Apple's own interests. “Clarity on this issue would help all who write and defend those who write code,” Dukarski said.

What happens now? Apple's lawyer: An FBI win is the beginning of a 'police state' With Apple set to argue its case against the FBI on March 22, Apple attorney Ted Olsen warned that the case is about more than meeting government demands to help break into an iPhone, it’s about fending off government agencies that seek ‘limitless’ powers to ‘listen to [our] conversations.’ 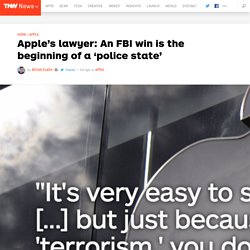 You can imagine every different law enforcement official telling Apple we want a new product to get into something. Even a state judge could order Apple to build something. There’s no stopping point. That would lead to a police state. With the FBI admitting the Apple ID of a suspect in the San Bernadino attacks had been changed, thus rendering the data unrecoverable, the case does seem to be venturing into territory firmly aimed at setting future precedent rather than yielding current results.

Our best speaker lineup, ever. This year’s edition of TNW Conference in Amsterdam includes some of the biggest names in tech. Learn more Later in that same interview, Burguan said: Apple Fight Could Hinge on First Amendment Protections of Computer Programs. In Fighting FBI, Apple Says Free Speech Rights Mean No Forced Coding : All Tech Considered. New York police officers stand outside an Apple Store on Tuesday while monitoring a pro-encryption demonstration. 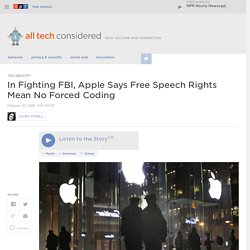 Julie Jacobson/AP hide caption toggle caption Julie Jacobson/AP New York police officers stand outside an Apple Store on Tuesday while monitoring a pro-encryption demonstration. Julie Jacobson/AP The Justice Department wants Apple to write special software to help it break into the iPhone used by one the San Bernardino terrorists. In its filing opposing a federal judge's order to help the government, Apple says it would be a violation of its First Amendment rights to free speech. It's pretty well established that speech comes in many forms, says Eric Goldman, a professor at Santa Clara University School of Law. Goldman says back in the 1990s, courts began to confront the question of whether software code is a form of speech. Daniel Bernstein was a student at University of California, Berkeley, who created an encryption software called "Snuffle. " The 9th U.S. Should Apple fight a court order to unencrypt iPhones? #unlockiPhone.