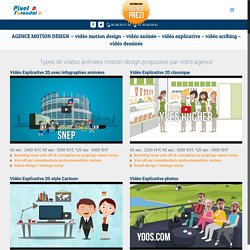 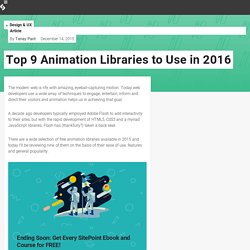 Today web developers use a wide array of techniques to engage, entertain, inform and direct their visitors and animation helps us in achieving that goal. A decade ago developers typically employed Adobe Flash to add interactivity to their sites, but with the rapid development of HTML5, CSS3 and a myriad JavaScript libraries, Flash has (thankfully?) Taken a back seat. Grid Item Animation Layout - Demo 1. Previous Demo Back to the Codrops article Animated Grid Layout Related Demos. 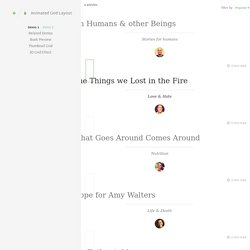 The State of SVG Animation : Adobe Dreamweaver Team Blog. The world of SVG (Scalable Vector Graphics) is fascinating, and with everything you can do with it and all the options you have it is overwhelming. 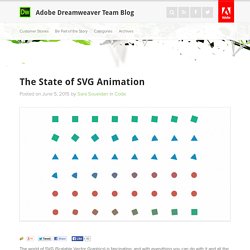 SVG is an XML-based vector image format for two-dimensional graphics, with support for interactivity and animation. In other words, SVGs are XML tags that render shapes and graphics, and these shapes and graphics can be interacted with and animated much like HTML elements can be. One of the frequently asked questions I get on SVG is about animating SVG images—not only the how, but the what.

So let’s have a look at the current (and future) state of animating SVG, and while we’re at it, mention some tips and tools that help you do it painlessly today. Synchronized Multimedia Integration Language , a.k.a SMIL. Inspiration for Text Styles and Hover Effects. Home.

The Rambling Wheels. Connoratherton. Animation Principles for the Web - CSS Animation. As front-end designers and developers, we use CSS to style, position and create great looking sites. 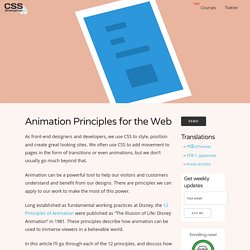 We often use CSS to add movement to pages in the form of transitions or even animations, but we don’t usually go much beyond that. Animation can be a powerful tool to help our visitors and customers understand and benefit from our designs. There are principles we can apply to our work to make the most of this power. Long established as fundamental working practices at Disney, the 12 Principles of Animation were published as “The Illusion of Life: Disney Animation” in 1981. These principles describe how animation can be used to immerse viewers in a believable world. In this article I’ll go through each of the 12 principles, and discuss how they might apply when making web pages. Squash and stretch This is the notion that an object has a physical mass, and when it moves this mass stays the same. It’s possible to ignore this rule when working with elements of a web page. 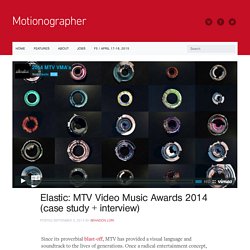 Once a radical entertainment concept, the channel has evolved from ‘music television’ to a global identity. No longer just a 24-hour music network, MTV is a brand in flux. Ask a person on the street which MTV they grew up with and each will recount something different. When it comes down to it, everyone has their own MTV. Whether yours was Madonna writhing around in a wedding dress or Miley Cyrus’s tongue-out tweaking (so long, modesty!)

We’ve all watched the VMAs. Each year, the show is beamed to the masses, dressed up in the finest graphic duds. In keeping with MTVs tradition of cool, the VMAs must be in a constant state of reinvention. SOLUTION: Call Patrick Clair. In a style as beautiful as it is haunting, this years VMAs were crafted around an artistic direction that was both simple and effective. The concept had far reach. Client: MTV/VMA Executive Producer: Lee Lodge. NBC TV IDENT. Somewhereto_ TV idents. MvsM / BT Vision Rebrand. Canal+ Spain Rebrand. Weareseventeen - Design, Motion & Direction - London UK. IFC Branding. Mun2: Rebrand. Plenty - Featured Works. "SOL MUSICA" - CHANNEL BRANDING. Motionographer Nickelodeon Worldwide Refresh: Interview with dyrdee.

Say hello to the new Nick! 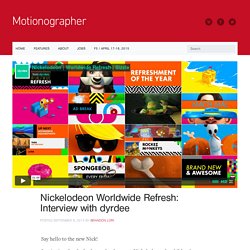 Just in time for the back-to-school season, Nickelodeon, the children’s television network, is refreshing their worldwide broadcast package with a series of bubbly graphics that incorporate their most endearing properties. On the surface, the approach is deceptively simple, but make no mistake; designing for kids isn’t child’s play. Using an animated grid system, graphic elements squash-and-stretch into place, effectively boxing the type into readable blocks of information.

The tune-in lockups are a jigsaw puzzle of texture and pattern, but once resolved, are easy to read, despite the percolating animation.