Play Dojo of Death, a free online game on Kongregate. Alteraction. Cyberpunk Roleplaying. One Last Dance For The Capitalist Pigs (Julien Lallevé)FreeIndieGam.es. Westerado. Description: When a dastardly bandit kills your family, you saddle up with your six-guns to bring the murderer to justice. 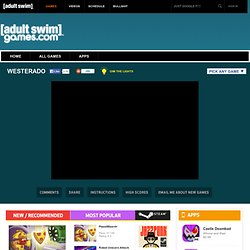 There's a new mystery to solve every time you play. Instructions: Move your cowboy with the WASD keys Press E to talk to people (what the cowboys call a 'gunversation)' To leave a conversation you can use A or D to simply walk away Draw your gun with the J key. To fire your gun you must first cock it with the K key. Reload with the R key. Tips: Take notes. You can kill anyone. The cowboys say that sometimes losing at cards can be as useful as winning... If you're down to your last hat you can buy more from the haberdasher. Remember you can fast travel by hopping on your horse! Play at Heartbreaking with Cara Ellison. For Unwinnable’s Sex Week, I did not, as others did, indulge in ‘method’ writing, as I am currently as about as sexually active as a nun who has sprained her crotch. 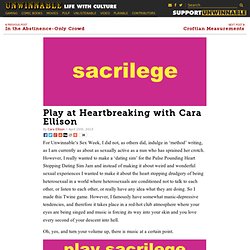 However, I really wanted to make a ‘dating sim’ for the Pulse Pounding Heart Stopping Dating Sim Jam and instead of making it about weird and wonderful sexual experiences I wanted to make it about the heart stopping drudgery of being heterosexual in a world where heterosexuals are conditioned not to talk to each other, or listen to each other, or really have any idea what they are doing. So I made this Twine game. However, I famously have somewhat manic-depressive tendencies, and therefore it takes place in a red-hot club atmosphere where your eyes are being singed and music is forcing its way into your skin and you love every second of your descent into hell.

Oh, yes, and turn your volume up, there is music at a certain point. Anyway, enjoy whatever this is. Cove of Flies. Dated a spike briefly. 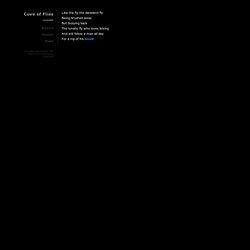 \n\nIt crawled along the floors to get to you. \n\nIt had a flower tucked in its point. \n\nThe pits filled themselves up in deference. \n\nMetal grates opened. \n\nTreasure chests were [[found|N302]]. Kingdom. A very minimal strategy game that encourages you to stop and enjoy the scenery every now and then. 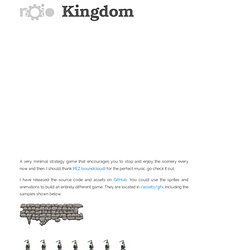 I should thank PEZ (soundcloud) for the perfect music, go check it out. I have released the source code and assets on GitHub. You could use the sprites and animations to build an entirely different game. They are located in /assets/gfx, including the samples shown below. Card Hunter. Live Free Play Hard: Porpentine’s Top 10 of 2013. By Porpentine on January 5th, 2014 at 2:00 pm. 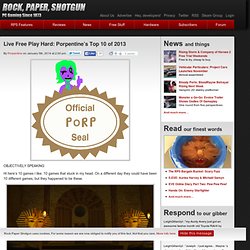 Hi here’s 10 games I like. 10 games that stuck in my head. On a different day they could have been 10 different games, but they happened to be these. Room of 1000 Snakes by Ben Esposito and Yuliy Vigdorchik The perfect game to watch someone else play. It makes me happy in a purer way than pretty much any other game this year. Blues for Mittavinda by Jack King-Spooner Zen Wild West surreal wander that intimately manifests the power of the author in a way few would dare. In all the noise of gunfire and the shout of explosions, one of the best games about death in 2013 is very quiet. Gods Will Be Watching by Deconstructeam Narrative strategy game with lovely bleak art, about a party of scifi adventurers crashed on a planet infected by plague. I think it’s just a little too hard but tuning my strategy to survive slightly longer every time is satisfying and tense. Composition 62 by Nuprahtor “This is an Angels of Mons moment simulator.”

Candy Box! Bridge to Terabithia (2007) Save the Date. A simple game about stuff. 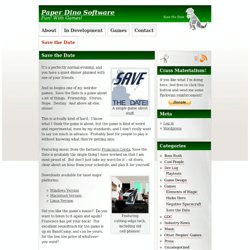 It’s a perfectly normal evening, and you have a quiet dinner planned with one of your friends. And so begins one of my weirder games. Save the Date is a game about a lot of things. Friendship. Stories. This is actually kind of hard. Featuring music from the fantastic Francisco Cerda , Save the Date is probably the single thing I have worked on that I am most proud of. Featuring cutting-edge tech, including old cell-phones! Downloads available for most major platforms: Did you like the game’s music?

Save the Date Soundtrack on Bandcamp Save the Date is provided as a free game, but please do not redistribute it! Be Sociable, Share!