Tiny plankton drive processes in the ocean that capture twice as much carbon as scientists thought. Ken Buesseler, Woods Hole Oceanographic Institution The Research Brief is a short take about interesting academic work. 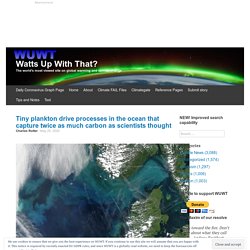 The big idea The ocean plays a major role in the global carbon cycle. The driving force comes from tiny plankton that produce organic carbon through photosynthesis, like plants on land. When plankton die or are consumed, a set of processes known as the biological carbon pump carries sinking particles of carbon from the surface to the deep ocean in a process known as marine snowfall.

Some of this carbon is consumed by sea life, and a portion is chemically broken down. In a recent study, I worked with colleagues from the U.S., Australia and Canada to understand how efficiently the biological pump captures carbon as part of this marine snowfall. We accounted more accurately for how deep the euphotic zone extends by using chlorophyll sensors, which indicate the presence of plankton. 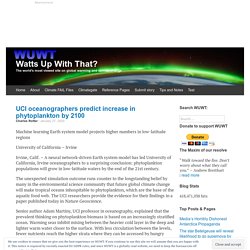 The phytoplankton decline, is there anything to it? By Andy May We have been told that the phytoplankton population is declining rapidly around the world and, of course, the cause is climate change. 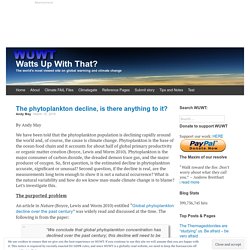 Phytoplankton is the base of the ocean food chain and it accounts for about half of global primary productivity or organic matter creation (Boyce, Lewis and Worm 2010). Phytoplankton is the major consumer of carbon dioxide, the dreaded demon trace gas, and the major producer of oxygen. So, first question, is the estimated decline in phytoplankton accurate, significant or unusual? Second question, if the decline is real, are the measurements long term enough to show it is not a natural occurrence? The purported problem An article in Nature (Boyce, Lewis and Worm 2010) entitled “Global phytoplankton decline over the past century” was widely read and discussed at the time. They conclude that the decline is due to higher sea surface temperatures (SST).

Ocean phytoplankton overview. Increased carbon dioxide enhances plankton growth. Coccolithophores -- tiny calcifying plants that are part of the foundation of the marine food web -- have been increasing in relative abundance in the North Atlantic over the last 45 years, as carbon input into ocean waters has increased. 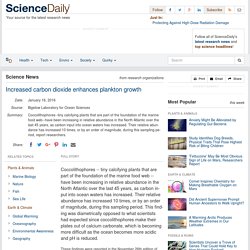 Their relative abundance has increased 10 times, or by an order of magnitude, during this sampling period. This finding was diametrically opposed to what scientists had expected since coccolithophores make their plates out of calcium carbonate, which is becoming more difficult as the ocean becomes more acidic and pH is reduced. These findings were reported in the November 26th edition of Science and based on analysis of nearly a half century of data collected by the long-running Sir Alister Hardy Foundation (SAHFOS) Continuous Plankton Recorder sampling program. "This provides one example on how marine communities across an entire ocean basin are responding to increasing carbon dioxide levels. The Impact of Ocean Acidification on Phytoplankton Fatty Acid Production. Study: Sea Life Benefits from Climate Change. A CO2-Induced Increase in Subtropical North Atlantic Coccolithophore Abundance. Paper Reviewed Krumhardt, K.M., Lovenduski, N.S., Freeman, N.M. and Bates, N.R. 2016. 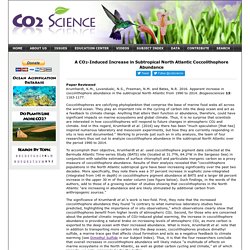 Apparent increase in coccolithophore abundance in the subtropical North Atlantic from 1990 to 2014. Biogeosciences 13: 1163-1177. Coccolithophores are calcifying phytoplankton that comprise the base of marine food webs all across the world ocean. They play an important role in the cycling of carbon into the deep ocean and act as a feedback to climate change. Anything that alters their function or abundance, therefore, could have significant impacts on marine ecosystems and global climate. Atlantic Coccolithophores Thrive as the Air's CO2 Content Rises. Paper Reviewed Rivero-Calle, S., Gnanadesikan, A., Del Castillo, C.E., Balch, W.M. and Guikema, S.D. 2015. 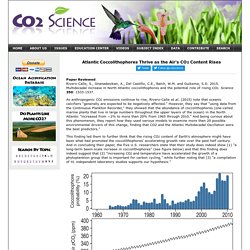 Multidecadal increase in North Atlantic coccolithophores and the potential role of rising CO2. Science 350: 1533-1537. As anthropogenic CO2 emissions continue to rise, Rivero-Calle et al. (2015) note that oceanic calcifiers "generally are expected to be negatively affected. " However, they say that "using data from the Continuous Plankton Recorder," they showed that the abundance of coccolithophores (one-celled marine plants that live in large numbers throughout the upper layers of the ocean) in the North Atlantic "increased from ~2% to more than 20% from 1965 through 2010. " And being curious about this phenomenon, they report how they used various models to examine more than 20 possible environmental drivers of this change, finding that CO2 and the Atlantic Multidecadal Oscillation were the best predictors. 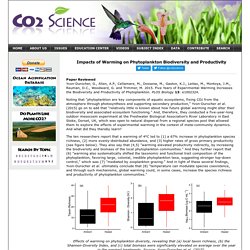 Five Years of Experimental Warming Increases the Biodiversity and Productivity of Phytoplankton. PLOS Biology 13: e1002324. Noting that "phytoplankton are key components of aquatic ecosystems, fixing CO2 from the atmosphere through photosynthesis and supporting secondary production," Yvon-Durocher et al. (2015) go on to add that "relatively little is known about how future global warming might alter their biodiversity and associated ecosystem functioning.

" And, therefore, they conducted a five-year-long outdoor mesocosm experiment at the Freshwater Biological Association's River Laboratory in East Stoke, Dorset, UK, which was open to natural dispersal from a regional species pool that allowed them to explore the effects of experimental warming in the context of meta-community dynamics.

And what did they thereby learn? Another Climate Alarm Gets Silenced: Study Shows “Tiny Algae, Hugely Resilient”! What follows is a press release from the Alfred Wegener Institute in Bremerhaven, Germany. 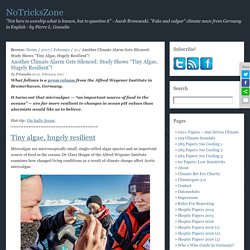 It turns out that microalgae — “an important source of food in the oceans” — are far more resilient to changes in ocean pH values than alarmists would like us to believe. Hat-tip: Die kalte Sonne. High CO2 and Warmth: Some Microzooplankton Absolutely Love It! Paper Reviewed Horn, H.G., Boersma, M., Garzke, J., Loder, M.G.J., Sommer, U. and Aberle, N. 2016. 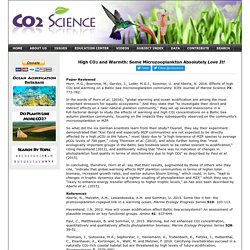 Effects of high CO2 and warming on a Baltic Sea microzooplankton community. ICES Journal of Marine Science 73: 772-782. In the words of Horn et al. (2016), "global warming and ocean acidification are among the most important stressors for aquatic ecosystems. " N Fixation and Growth of Cyanobacteria in CO2-Enriched Sea Water.