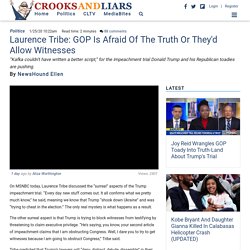 “Every day new stuff comes out. It all confirms what we pretty much know,” he said, meaning we know that Trump “shook down Ukraine” and was “trying to cheat in the election.” The only real mystery is what happens as a result. Maya Wiley Shreds Dershowitz's Assertion That Abuse Of Power Isn't Impeachable. Alan Dershowitz appeared on Ari Melber's show, The Beat, last night, to outline his strategy for defending Donald Jenius Trump against impeachment charges in the Senate trial. 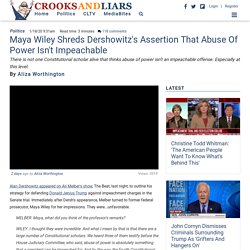 Immediately after Dersh's appearance, Melber turned to former federal prosecutor, Maya Wiley for her impressions. They were...unfavorable. Trump attorney gets schooled on presidential ‘high crimes and misdemeanors’ Jay Sekulow, one of Donald Trump’s paid liars attorneys, went on MSNBC with host Ari Melber to discuss how up is down and black is white and everything you see is not what you see. 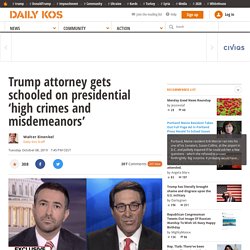 Gaslighting like it was going out of style, Sekulow told Melber that nothing Donald Trump has done is impeachable, and that he didn’t say the things that are in the whistleblower report, or in the carefully created “transcript”—that’s not a transcript—of Trump’s conversation with Ukrainian president Volodymyr Zelensky. JAY SEKULOW: I don't think it's impeachable. I don't see where it's a high crime or misdemeanor. Tell me what rule, law, or statute has been violated by the president as commander in chief and as the chief executive under Article Two of the constitution violated any rule. You may not like the politics of it. Sekulow begins to try and cut Melber off here to go into a hypothetical tangential argument that will not even remotely acknowledge the facts being made. Ex-Trump Staffer Tried Not To Lie To Ari Melber...It Didn't Go Well.

Former Trump senior campaign staffer Mark Lotter decided to throw himself on the grenade by joining Ari Melber on The Beat to try to word salad his way around a believable explanation about why Trump asking (extorting) Ukraine for help in advance of election 2020 is not illegal (it is). 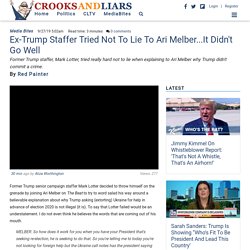 To say that Lotter failed would be an understatement. I do not even think he believes the words that are coming out of his mouth. MELBER: So how does it work for you when you have your President that's seeking re-election, he is seeking to do that. So you're telling me to today you're not looking for foreign help but the Ukraine call notes has the president saying "do me a favor", go after a domestic rival, Joe Biden.

LOTTER: That is not what the transcript says and you know better than that, Ari. LOTTER: And I'll reiterate to you what the actual phone call said. MELBER: -- investigating Joe Biden as a rival. . ↓ Story continues below ↓ (clip) (end clip) MELBER: I'll give you the final word, sir. Elie Mystal Cross-Examines Ari Melber To Show Dems How It's Done. Corey Lewandowski seemed to run the table on the Judiciary Committee on Tuesday. 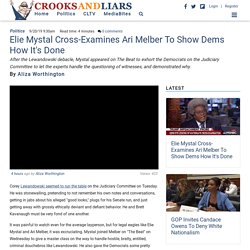 He was stonewalling, pretending to not remember his own notes and conversations, getting in jabs about his alleged "good looks," plugs for his Senate run, and just getting away with grossly ethically deviant and defiant behavior. He and Brett Kavanaugh must be very fond of one another. It was painful to watch even for the average layperson, but for legal eagles like Elie Mystal and Ari Melber, it was excruciating. Mystal joined Melber on "The Beat" on Wednesday to give a master class on the way to handle hostile, bratty, entitled, criminal douchebros like Lewandowski. He also gave the Democrats some pretty solid advice on how to move on with these proceedings. MYSTAL: I was frustrated very much yesterday. Then Mystal demonstrated in a hilarious mini-cross-examination to drive the point even further home. Ari Melber Puts The Conclusion Of The Mueller Report In Perspective.

Trump Hammered Over Pledge That Mexico Will Pay For His Stupid Wall. Ari Melber laid out the case against Donald Trump, the Trump shutdown, and why the shutdown itself is such a monumental broken promise, one media fails to comprehend. 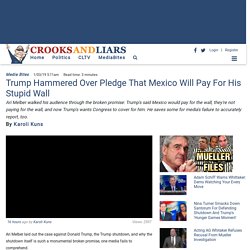 Trump promised Mexico would pay for it. Ari Melber Completely Destroys Paul Ryan's Pathetic 'Legacy' Paul Ryan is a spineless weasel whose biggest legislative success is passing a tax cut for the top 1 percent by doing nothing to help the people who elected him. 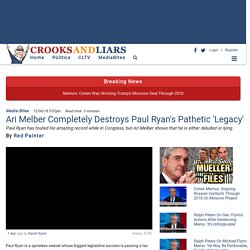 When asked about the craven power grab by the Republicans in Wisconsin, Ryan had nothing to say. 'Improper and it was unprecedented': MSNBC host explains how Trump was 'busted' interfering in Mueller probe today. Ari Melber: Why James Comey Still Doesn't Get It. Ari Melber Brings The Heat To Jack Quinn Over Scooter Libby Pardon.