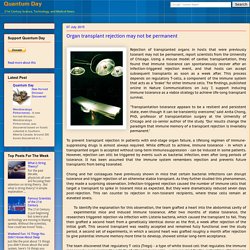 Using a mouse model of cardiac transplantation, they found that immune tolerance can spontaneously recover after an infection-triggered rejection event, and that hosts can accept subsequent transplants as soon as a week after. This process depends on regulatory T-cells, a component of the immune system that acts as a "brake" for other immune cells. The findings, published online in Nature Communications on July 7, support inducing immune tolerance as a viable strategy to achieve life-long transplant survival. "Transplantation tolerance appears to be a resilient and persistent state, even though it can be transiently overcome," said Anita Chong, PhD, professor of transplantation surgery at the University of Chicago and co-senior author of the study. Video: Successful Stanford Organ Transplant Without Using Anti-Rejection Medication. 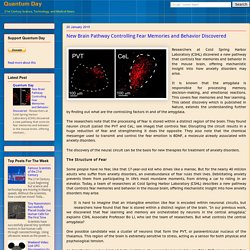 It is known that the amygdala is responsible for processing memory, decision-making, and emotional reactions. This covers fear memories and fear learning. This latest discovery which is published in Nature, extends the understanding further by finding out what are the controlling factors in and of the amygdala. Determining Reaction Level of Food Allergens. The Journal of Allergy and Clinical Immunology published a study on the level of food allergens required to cause an allergic reaction to people sensitive to them. 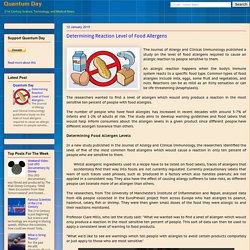 An allergic reaction happens when the body's immune system reacts to a specific food type. Common types of food allergies include milk, eggs, some fruit and vegetables, and nuts. Reactions can be as mild as an itchy sensation or can be life threatening (Anaphylaxis). The researchers wanted to find a level of allergen which would only produce a reaction in the most sensitive ten percent of people with food allergies. Ultrasound Treatment Can Prevent and Treat Acute Kidney Injury (AKI) A new study to be published in the Journal of the American Society of Nephrology (JASN) shows that applying ultrasound to the kidneys prior to a major operation, where blood flow to the kidneys is disrupted, may help preserve and protect the kidneys after blood flow is restored. 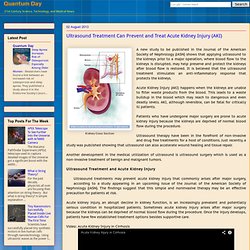 It is believed that the ultrasound treatment stimulates an anti-inflammatory response that protects the kidneys. Acute Kidney Injury (AKI) happens when the kidneys are unable to filter waste products from the blood. This leads to a waste buildup in the blood which may reach to dangerous and even deadly levels. AKI, although reversible, can be fatal for critically ill patients. Patients who have undergone major surgery are prone to acute kidney injury because the kidneys are deprived of normal blood flow during the procedure. Laser Lipolysis - Non Surgical Procedure That Melts Fat and Tightens Skin. Latest research on laser lipolysis, a new fat reducing procedure that is non-surgical and non-invasive, is being presented at the Society of Interventional Radiology's 38th Annual Scientific Meeting in New Orleans. 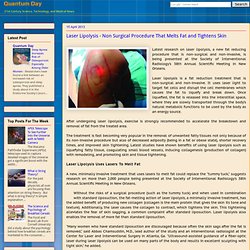 Laser lipolysis is a fat reduction treatment that is non-surgical and non-invasive. It uses laser light to target fat cells and disrupt the cell membranes which causes the fat to liquefy and break down. Once liquefied, the fat is released into the interstitial space, where they are slowly transported through the body’s natural metabolic functions to be used by the body as an energy source. After undergoing laser lipolysis, exercise is strongly recommended to accelerate the breakdown and removal of fat from the treated area. The treatment is fast becoming very popular in the removal of unwanted fatty tissues not only because of its non-invasive procedure but also of decreased adiposity (being in a fat or obese state), shorter recovery times, and improved skin tightening. MIT News: MIT’s Institute for Medical Engineering and Science - A Source for Big Data Through bigdata@CSAIL. With the recent launch of MIT’s Institute for Medical Engineering and Science, MIT News examines research with the potential to reshape medicine and health care through new scientific knowledge, novel treatments and products, better management of medical data, and improvements in health-care delivery. 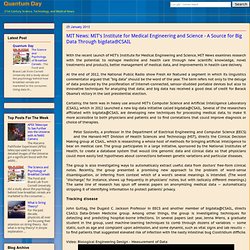 At the end of 2012, the National Public Radio show Fresh Air featured a segment in which its linguistics commentator argued that “big data” should be the word of the year. The term refers not only to the deluge of data produced by the proliferation of Internet-connected, sensor-studded portable devices but also to innovative techniques for analyzing that data; and big data has received a good deal of credit for Barack Obama’s victory in the last presidential election. Certainly, the term was in heavy use around MIT’s Computer Science and Artificial Intelligence Laboratory (CSAIL), which in 2012 launched a new big-data initiative called bigdata@CSAIL. Tracking disease Chats, graphs.