Coaxing Star Producers to Be Leaders. Most companies hunger for hard-charging go-getters, and they sometimes motivate those workers with an “eat what you kill” model of compensation. 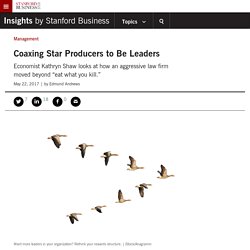 At its purest, eat-what-you-kill means basing the size of a person’s paycheck almost entirely on how much business that person brings in. Think here of sales reps, store managers, money managers, lawyers, and investment bankers. At some point, however, even fast-growing companies need more than big producers. They need leaders who will invest time and effort on the big picture. If Humble People Make the Best Leaders, Why Do We Fall for Charismatic Narcissists? Executive Summary. 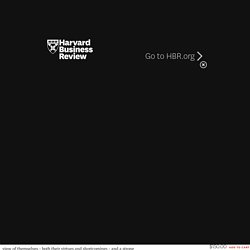 The 5 Elements of a Strong Leadership Pipeline. Investments in traditional leadership development are often misguided and a waste of money. 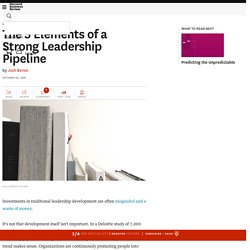 It’s not that development itself isn’t important. In a Deloitte study of 7,000 organizations this year, 89% of executives rated “strengthening the leadership pipeline” an urgent issue. That’s up from 86% last year, and the trend makes sense. Organizations are continuously promoting people into management, and those new leaders struggle with the transition. How to Know If Someone Is Ready to Be a Manager. When you’re hiring a new manager, the stakes are high. 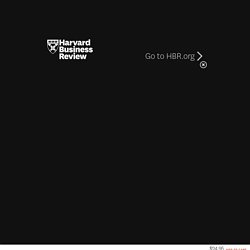 You need someone who can effectively lead people, manage a budget, liaise with upper management — and, usually, do it all from day one. But what if a potential hire doesn’t yet have a track record in doing all of the above? Would you hire or promote a star player into a management role if they’ve never managed anyone? To gain some perspective on how to handle this kind of challenge, I reached out to some management experts for their point of view on the skills and personalities to look for.

An important thing to look for in this situation is an awareness of the nature of management. 5 Ways to Turn Your Business into a Top Company for Leaders. What Makes Someone an Engaging Leader. “How can we have the highest profitability in five years and still have gaps in employee engagement?” 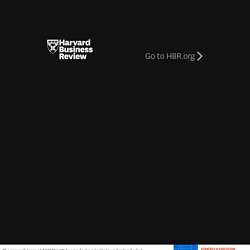 Asks an executive at a large industrial products company. The reality is that the two don’t necessarily go together. This management team, like many others, has fought to increase profitability through business transformation, restructuring, and cost-cutting, without devoting much thought to keeping employees engaged and connected. As a result, the company may find it hard to sustain the gains, much less drive future growth. Organizational agility, innovation, and growth are really difficult without engaged employees. The research team at AON Hewitt has made it a priority to understand what is going on in enterprises where both financial performance and employee engagement levels are soaring.

What do these leaders of highly engaged teams have in common? Formative early experiences. Guiding beliefs. Engaging behaviors. Measure engagement levels. High Performance Is Not the Same as High Potential. If your company is like most, you probably identify your next leaders from a pool of your top performers. They might be salespeople or project managers or skilled developers, but in any event, they've got a reputation for delivering results. Stong performance and the results it carries are all well and good, of course, but it does not necessarily indicate that an employee will make a good leader. And according to research from member-based executive team advisory company CEB, companies are seriously hurting themselves by failing to differentiate between performance and potential.

Defining True Potential CEB's report says that just one in six high-performance employees also display the attributes that indicate potential. The Eight-Minute Test That Can Reveal Your Effectiveness as a Leader - Jack Zenger and Joseph Folkman. By Jack Zenger and Joseph Folkman | 12:00 PM August 12, 2013 How can I determine if I am a good leader, or perhaps even a great one? 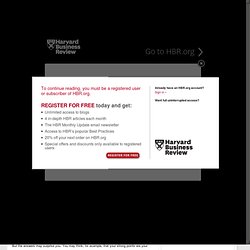 What are my strengths, and do any rise to the very highest levels? I know I have some weaknesses (as everyone does), but are any of them so appalling as to derail my career? Many people have asked us those questions over the years. Management Is (Still) Not Leadership - John Kotter. By John P. 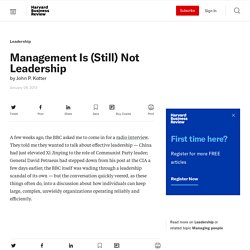 Kotter | 11:00 AM January 9, 2013 A few weeks ago, the BBC asked me to come in for a radio interview. They told me they wanted to talk about effective leadership — China had just elevated Xi Jinping to the role of Communist Party leader; General David Petraeus had stepped down from his post at the CIA a few days earlier; the BBC itself was wading through a leadership scandal of its own — but the conversation quickly veered, as these things often do, into a discussion about how individuals can keep large, complex, unwieldy organizations operating reliably and efficiently. That’s not leadership, I explained. Three Differences Between Managers and Leaders - Vineet Nayar. By Vineet Nayar | 10:01 AM August 2, 2013. 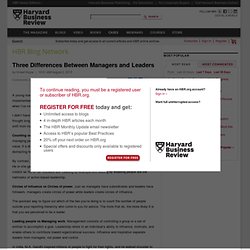 The 5 Ways to Spot an Emotionally Intelligent Leader. Research has shown us that more than 90 percent of top leadership performers have a high amount of emotional intelligence, or EI. 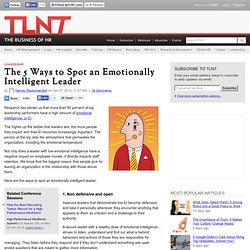 The higher up the ladder that leaders are, the more people they impact and their EI becomes increasingly important. The person at the top sets the atmosphere that permeates the organization, including the emotional temperature. Not only does a leader with low emotional intelligence have a negative impact on employee morale, it directly impacts staff retention. We know that the biggest reason that people give for leaving an organization is the relationship with those above them.

Here are five ways to spot an emotionally intelligent leader: Five ways to identify future leaders. We’re all leaders in some form. 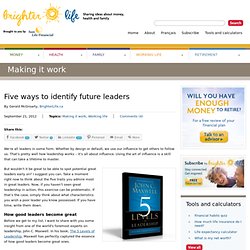 Whether by design or default, we use our influence to get others to follow us. That’s pretty well how leadership works – it’s all about influence. Using the art of influence is a skill that can take a lifetime to master. But wouldn’t it be great to be able to spot potential great leaders early on? I suggest you can. How good leaders become great Before we get to my list, I want to share with you some insight from one of the world’s foremost experts on leadership, John C. His concept of the various leadership levels is brilliant in its simplicity. For our purposes, I want to highlight Maxwell’s entry level of leadership. Many people in Level 1 never make it to Level 2.