Be lucky - it's an easy skill to learn 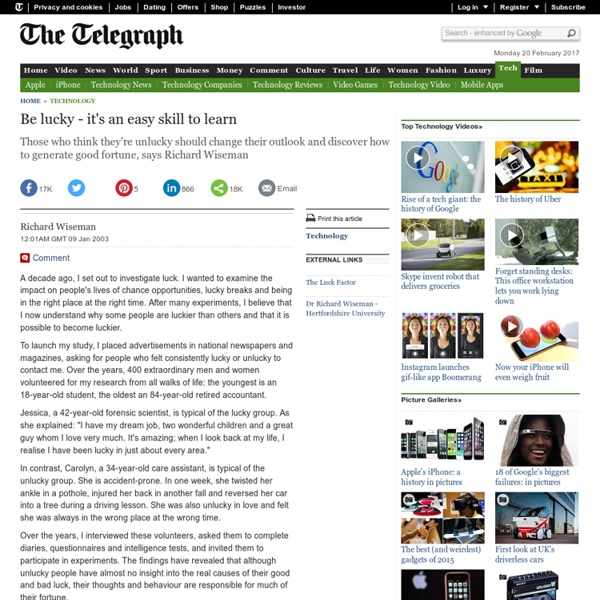 Take the case of chance opportunities. Lucky people consistently encounter such opportunities, whereas unlucky people do not. I carried out a simple experiment to discover whether this was due to differences in their ability to spot such opportunities. I gave both lucky and unlucky people a newspaper, and asked them to look through it and tell me how many photographs were inside. On average, the unlucky people took about two minutes to count the photographs, whereas the lucky people took just seconds. Why? For fun, I placed a second large message halfway through the newspaper: "Stop counting. Personality tests revealed that unlucky people are generally much more tense than lucky people, and research has shown that anxiety disrupts people's ability to notice the unexpected. The experiment was then repeated with a second group of people, who were offered a large financial reward for accurately watching the centre dot, creating more anxiety.

You probably know to ask yourself, “What do I want?” Here’s a way better question Everybody wants what feels good. Everyone wants to live a carefree, happy and easy life, to fall in love and have amazing sex and relationships, to look perfect and make money, and be popular and well-respected and admired and a total baller to the point that people part like the Red Sea when you walk into the room. Everyone would like that—it’s easy to like that. If I ask you, “What do you want out of life?” The Massive List of Genius - People With the Highest IQ - One Mans Blog 33.8K Flares Google+ 27 Twitter 109 Facebook 1.6K Reddit 11 StumbleUpon 32.1K Pin It Share 4 4 LinkedIn 9 inShare9 33.8K Flares × The other day I sat down to watch The Princess Bride for about the 10,000th time. Innovative Ideas To Curb Food Waste Range From Sharing To Dumpster Dining Kids News Article Food waste is a growing problem both in the United States and across the globe. In North America alone anywhere from 30-40% of perfectly edible food ends up in the trash each year. To put it in perspective that is almost 20 pounds of food per person, per month! While the fact that most ends up in our landfills is bad enough, what's worse is that over 48 million Americans, including 15.3 million kids, live in households that do not have sufficient food! Now, concerned citizens are trying to raise awareness of the issue with some innovative ideas.

Think Simple Now » How to Learn Without Memorizing Photo by Edwin Stemp Rote memorization is an inefficient way to learn. Just retaining a single formula can mean pounding the same information into your skull dozens of times. If your computer hard drive had this accuracy, you’d probably throw it out. Unfortunately, you’re stuck with your brain. The good news is that you don’t need to learn by memorization. Watch Out For Those Selfies, They Can Be Deadlier Than Sharks! Kids News Article The proliferation of smartphones with cameras that can take self-portraits or selfies as they are popularly called has liberated us. We can now document every moment of our life and instantly share it with the world through the myriad of social networking websites. However, some believe that the incessant quest to capture the "ultimate" selfie is causing people to take unnecessary risks that in some cases are proving to be deadly! So how bad is the problem? According to recent news reports, the desire to take a "breathtaking" selfie has killed 12 people this year. Though that may not seem like a lot it is four (33%) more than the eight people that have died from shark attacks.

Connected Mode: 10 Ways to Stay Productive with Online Work Every Monday is Productivity & Organization Day at Zen Habits. Editor’s note: The following is a guest post written by Anne Zelenka, editor of Web Worker Daily. It provides a nice contrast to my usual philosophy of single-tasking, and I’m honored to have a distinguished writer such as Anne contribute to Zen Habits. Maybe you’ve heard you should firewall your attention and eliminate annoying and addictive interruptions like IM and Twitter. But there’s another way to work, a way that you can stay in communication with colleagues, deal productively with interruptions, and keep a broad view of what’s available online. I call it connected mode.

Video Of The Week - Social Experiment Tests The Kindness Of Londoners Kids News Article How do Londoners react when they see a stranger in distress? Do they ignore the person's plight or rush to help? That is what the folks at Action Productions, a newly established ethically driven creative agency recently tested on the streets of the bustling city. How to Actually Execute Your To-Do List: or, Why Writing It Down Doesn’t Actually Get It Done Post written by Leo Babauta. Follow me on twitter . Have you gotten good at organizing your tasks in a to-do list, but have trouble actually executing them? You’re not alone. Getting things on your to-do list actually done is difficult because it’s really a collection of habits that most people don’t think about.

The Incredible (Tree)House That Foster Huntington Calls Home Kids News Article After bidding farewell to his job as a designer for Ralph Lauren in 2011, Foster Huntington embarked on a nomadic lifestyle, traveling around the country in a Volkswagen Syncro Camper Van. To make ends meet, he worked as a photographer and blogger and even published a book called Home is Where You Park it, about his unusual lifestyle. But all good things have to come to an end. By 2014, the young man was ready to settle down in a more permanent home. For most people that would entail seeking out an apartment, condominium or single-family home.