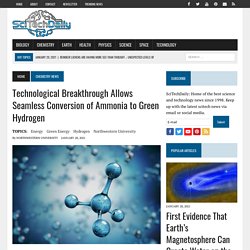 Northwestern University researchers have developed a highly effective, environmentally friendly method for converting ammonia into hydrogen. Outlined in a recent publication in the journal Joule, the new technique is a major step forward for enabling a zero-pollution, hydrogen-fueled economy. The idea of using ammonia as a carrier for hydrogen delivery has gained traction in recent years because ammonia is much easier to liquify than hydrogen and is therefore much easier to store and transport.

Northwestern’s technological breakthrough overcomes several existing barriers to the production of clean hydrogen from ammonia. “The bane for hydrogen fuel cells has been the lack of delivery infrastructure,” said Sossina Haile, lead author of the study. Haile is Walter P. “The ammonia first encounters the catalyst that splits it into nitrogen and hydrogen,” Haile said. New discovery opens novel pathway for high-titer production of drop-in biofuels.

A special light-dependent enzyme, which was first discovered about three years ago, is the focal point in a new scientific discovery that enables high-yield production of drop-in biofuels from biomass. 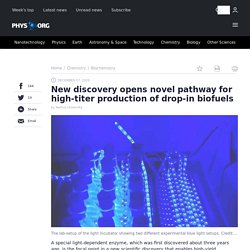 In a study now published in Nature Communications, engineers from Aarhus University and Massachusetts Institute of Technology have proved, that the original assumption of the enzymatic process in this biomass-to-biofuels conversion is actually wrong. The findings have allowed the researchers to successfully biosynthesize green fuels at close to industrially relevant levels of 1.47 gram per liter from glucose. The light-dependent enzyme, which originates from microalgae, has the particular characteristic that it can decarboxylate fatty acids into alkanes (thus converting cellulosic biomass into drop-in biofuels) using blue light as the only source of energy. Microorganisms Convert Renewable Electricity into Carbon-Neutral Methane. 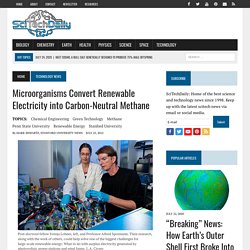 Their research, along with the work of others, could help solve one of the biggest challenges for large-scale renewable energy: What to do with surplus electricity generated by photovoltaic power stations and wind farms. L.A. Cicero Taking a “greener” approach to methane production, scientists from Stanford and Pennsylvania State are raising colonies of microorganisms, called methanogens, which have the ability to turn electrical energy into pure methane in microbial process that is carbon neutral. Microbes that convert electricity into methane gas could become an important source of renewable energy, according to scientists from Stanford and Pennsylvania State universities.

Researchers at both campuses are raising colonies of microorganisms, called methanogens, which have the remarkable ability to turn electrical energy into pure methane – the key ingredient in natural gas. ‘Green’ methane Microbial communities. Air-Powered Energy Storage Knocks Out Coal And Gas. Clean Power Published on June 19th, 2020 | by Tina Casey June 19th, 2020 by Tina Casey In yet another sign that the COVID-19 recovery will be a green one, the firm Highview Power is rolling full steam ahead with plans for a fleet of air-powered energy storage systems in the UK. 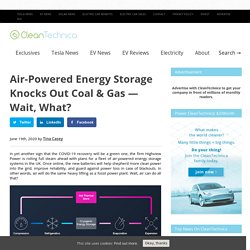 Once online, the new batteries will help shepherd more clean power into the grid, improve reliability, and guard against power loss in case of blackouts. In other words, air will do the same heavy lifting as a fossil power plant. Highview Power is on a mission to knock out fossil fuels with a liquid air long duration energy storage system called CRYObattery (image via Highview Power) A New Air-Powered Energy Storage System For those of you new to the topic, yes, air can be used to store energy. Discriminating against men hasn’t solved gender disparities in STEM - Baltimore Sun. Caffeine Peps Up Solar Energy. Inspiration struck during one of the most critical rituals of university life: a coffee break. 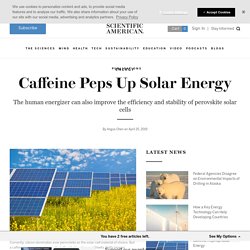 “We need coffee to boost our energy,” Rui Wang told Jingjing Xue, a fellow graduate student in the engineering department of the University of California, Los Angeles. Maybe, Wang suggested jokingly, we should caffeinate our experimental solar cells to make them work better, too. Xue’s response: That might actually work. It was a moment of “pure luck,” says U.C.L.A. engineer Yang Yang, Wang and Xue’s graduate advisor. Yang’s lab has been trying to improve the lifespan of a promising but unstable type of solar panel, made from a material called perovskite, by lacing panels with certain stabilizing compounds. The term perovskite in this case refers to any crystal with a specific kind of structure.

But this material is also notoriously finicky. This is where caffeine comes in. To test this idea, Yang and his students built a perovskite solar panel with caffeine added to the crystals. Caffeine Peps Up Solar Energy.