Corporations as Reprehensible People My Friend

The sedition no one is talking about may be more damaging than the Capitol riots - Raw Story - Celebrating 16 Years of Independent Journalism. Why does America have so many monopolies? Ganesh Sitaraman Ganesh Sitaraman is a Professor of Law and Director at Vanderbilt Law School. 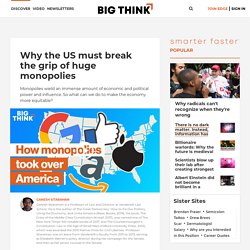 He is the author of The Great Democracy: How to Fix Our Politics, Unrig the Economy, and Unite America (Basic Books, 2019), His book, The Crisis of the Middle-Class Constitution (Knopf, 2017), was named one of The New York Times' 100 notable books of 2017, and The Counterinsurgent‘s Constitution: Law in the Age of Small Wars (Oxford University Press, 2012), which was awarded the 2013 Palmer Prize for Civil Liberties. Professor Sitaraman was on leave from Vanderbilt‘s faculty from 2011 to 2013, serving as Elizabeth Warren‘s policy director during her campaign for the Senate, and then as her senior counsel in the Senate. Tobacco Master Settlement Agreement. Lawsuit settlement in the United States The settlement also dissolved the tobacco industry groups Tobacco Institute, the Center for Indoor Air Research, and the Council for Tobacco Research. 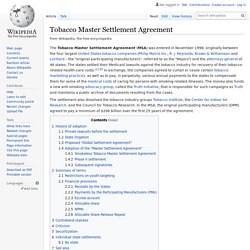 In the MSA, the original participating manufacturers (OPM) agreed to pay a minimum of $206 billion over the first 25 years of the agreement. History of adoption[edit] Private lawsuits before the settlement[edit] In September 1950, an article was published in the British Medical Journal linking smoking to lung cancer and heart disease.[2] In 1954 the British Doctors Study confirmed the suggestion, based on which the government issued advice that smoking and lung cancer rates were related.[3] In 1964 the United States Surgeon General's Report on Smoking and Health likewise began suggesting the relationship between smoking and cancer. Texas company says they have 2 million N95 masks for sale — for 6 times the normal price. In normal times, an N95 face mask would cost a big corporation a buck or less — particularly if it ordered a million of them. 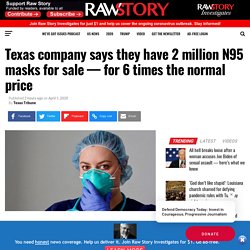 But these aren’t normal times, and the pitch from industrial supplier Hatfield and Co. to sell as many as 2 million masks to a major U.S. oil company last week wasn’t your typical offer. The Texas-based supplier wanted $6.3 million for a minimum order of 1 million masks, with an option of buying 2 million for nearly $13 million, sales documents and interviews indicate. At a time when the new coronavirus is rapidly spreading across the country and health care professionals are desperate for these face masks — which filter out at least 95% of airborne particles — to protect sick people and themselves, critics say a price like that smacks of profiteering and price gouging by someone in the supply chain.

“You’re not just marking it up like 50 cents. “There are some in Houston, Dallas, Florida and you know, I guess you would say spread out all over,” Lindeman said. The Evil List: Which tech companies are doing the most harm? Maybe it was fake news, Russian trolls, and Cambridge Analytica. 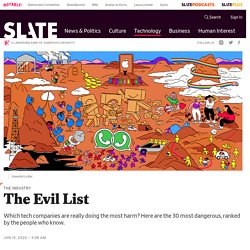 Or Travis Kalanick’s conniption in an Uber. Or the unmasking of Theranos. Or all those Twitter Nazis, and racist Google results, and conspiracy theories on YouTube. Bankrupted PG&E rejects San Francisco's bid to buy back the power grid. John Oliver Makes Us Think About What Happens When We Click Amazon's Buy Button. John Oliver is maybe the only powerful media figure who regularly stands up for workers, and this week, he took a look at the "brutal" working conditions inside Amazon warehouses. Bosses pocket Trump tax windfall as workers see job promises vanish. Stephen Smith worked at an AT&T call center in Meriden, Connecticut, for over 20 years before the giant telecoms company announced it was closing the city’s three call centers in February 2019. 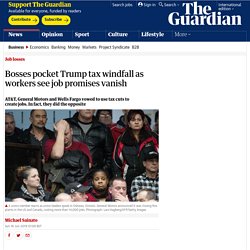 “At 46 years old, I’m looking for a new job,” Smith said. “They basically told us we either need to move south or lose our job. GM Announces Money Saved From Layoffs To Fund Massive Investment In Lake Homes, Private Jets. - The Washington Post. United Replaces Employee Bonuses With a Lottery - The Points Guy. This May Be the Ugliest Airline Story You've Heard This Year (No, It Doesn't Involve United) Absurdly Driven looks at the world of business with a skeptical eye and a firmly rooted tongue in cheek. 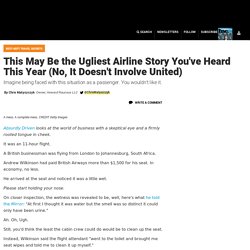 It was an 11-hour flight. A British businessman was flying from London to Johannesburg, South Africa. Lawyer says man dragged from United flight suffered concussion, broken nose and lost two front teeth. A passenger of a United Airlines flight after he was forcibly removed from his seat by security officers (Screen cap). 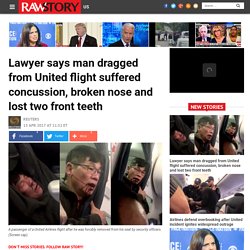 The passenger dragged from a United Airlines plane in Chicago in an incident that sparked international outrage and turned into a public relations nightmare for the carrier, will likely sue the company, his attorney said on Thursday. “For a long time airlines, United in particular, have bullied us,” Thomas Demetrio told reporters at a press conference in Chicago. “Will there be a lawsuit? Yeah, probably.” He said the law stated that passengers could not be ejected from planes with unreasonable force. Donald Trump's Treasury Secretary Pick Is A Hedge Funder And 2nd-Generation Goldman Sachs Partner. STAT goes to court to unseal records of OxyContin maker. STAT is asking a Kentucky court to make public sealed documents that could provide new information on how Purdue Pharma marketed its potent pain pill OxyContin — including what top executives knew about how addictive it was, and whether they downplayed the risks. 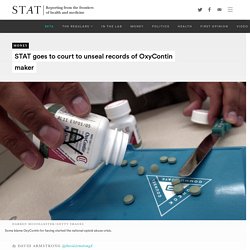 Purdue has faced hundreds of lawsuits and numerous government investigations over its aggressive promotion of OxyContin, which some blame for helping spawn the national opioid abuse crisis. In 2007, three corporate executives and an affiliated company pleaded guilty to fraudulently marketing the drug as less addictive than other pain medications and paid $634 million in fines. Despite the years of litigation, Purdue has successfully kept millions of company records out of view through judicial secrecy orders or settlement agreements mandating their destruction. A $24 million settlement in December of a lawsuit brought against Purdue by the Kentucky attorney general included such a provision. STAT Motion to Unseal Records. Ministers urged to examine new buy-to-let boom in UK care homes - The Bureau of Investigative Journalism. 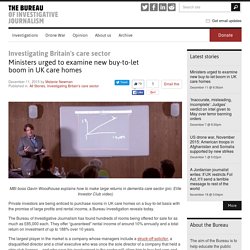 The Bureau of Investigative Journalism has found hundreds of rooms being offered for sale for as much as £85,000 each. They offer “guaranteed” rental income of around 10% annually and a total return on investment of up to 188% over 10 years. CNN Correspondent Suspended For Two Weeks For Speaking The Truth. <a class="icopyright-article-tools-noscript" href=" target="_blank" title="Main menu of all reuse options"><img height="25" width="27" border="0" align="bottom" alt="[Reuse options]" src=" Click here for reuse options! 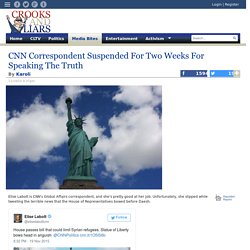 </a> Elise Labott is CNN's Global Affairs correspondent, and she's pretty good at her job. Unfortunately, she slipped while tweeting the terrible news that the House of Representatives bowed before Daesh. What Exxon knew about the Earth's melting Arctic. Back in 1990, as the debate over climate change was heating up, a dissident shareholder petitioned the board of Exxon, one of the world’s largest oil companies, imploring it to develop a plan to reduce carbon dioxide emissions from its production plants and facilities.

The board’s response: Exxon had studied the science of global warming and concluded it was too murky to warrant action. The company’s “examination of the issue supports the conclusions that the facts today and the projection of future effects are very unclear.” Yet in the far northern regions of Canada’s Arctic frontier, researchers and engineers at Exxon and Imperial Oil were quietly incorporating climate change projections into the company’s planning and closely studying how to adapt the company’s Arctic operations to a warming planet. “Certainly any major development with a life span of say 30-40 years will need to assess the impacts of potential global warming,” Croasdale told an engineering conference in 1991.

CBS reporter grills pharmaceutical CEO: ‘You see how greedy this move looks’ Turing Pharmaceuticals CEO Martin Shkreli defended raising the price of Daraprim from $13.50 to $750, even though it is used to treat vulnerable groups like AIDS and cancer patients. America’s Most Admired Lawbreaker. By Steven Brill What Happened in the Previous Chapter Heavy Up Top Since he had begun taking Risperdal, Austin Pledger was having fewer tantrums. The reports Benita Pledger read from her son’s school reflected what she was seeing at home: “His frustration behavior has improved greatly,” his special education teacher wrote in April 2004. But it was far from a complete turnaround. America’s Most Admired Lawbreaker. Making Money From Their Blood: Cheney's Former War-Profiteering Company Is Suing Veterans It Poisoned in Iraq. The Climate Deception Dossiers: Internal Fossil Fuel Industry Memos Reveal Decades of Corporate Disinformation.

The poor, the young, the black and the stupid": Inside Big Tobacco's plans to kill a billion people. How the Red Cross Raised Half a Billion Dollars for Haiti ­and Built Six Homes. Service Members to Receive $39 Million for Violations of the Servicemembers Civil Relief Act. Pregnant Popeyes Manager Fired, Rehired After Refusing To Pay For Armed Robbery (UPDATE) What?! Another Massive BP Oil Spill Cover-Up? Sarah Silverman and John Oliver hammer payday loan industry ‘motherf*ckers’ Insta-Loophole: In Florida, High-Cost Lender Skirts the Law.

This story was co-published with The Tampa Bay Times. When Florida lawmakers banned high-interest car title loans in 2000, then-Gov. Thank You for Your Service: How One Company Sues Soldiers Worldwide. At Walgreen, Renouncing Corporate Citizenship. Chase Bank Slams the Door on More Porn Stars. We're About to Lose Net Neutrality — And the Internet as We Know It. She's Worked At McDonald's For 10 Years. She Asked Its President A Simple Question. Then Cops Came. SEC Kabuki Theater: Ex-Goldman Trader Found Liable in Mortgage Deal. The real war on reality. Gas Fracking Industry Using Military Psychological Warfare Tactics and Personnel In U.S. Communities. Settlement Expected With Banks Over Home Loans. Cheat Sheet: BofA Supplied Default Answers for ‘Independent’ Foreclosure Claims Reviewers. How Wal-Mart Used Payoffs to Get Its Way in Mexico. Matt Taibbi: After Laundering $800 Million in Drug Money, How Did HSBC Executives Avoid Jail? Wal-Mart Said 'No' to Paying for Fire Safety in Bangladesh.