Elizabeth Warren's Kick-Ass Speech Tells It Like It Is. What Should Hillary Do? In the Bernie- Hillary battle for the presidential nomination, Elizabeth Warren stayed on the perimeter. 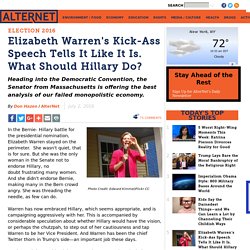 She wasn't quiet, that is for sure. But she was the only woman in the Senate not to endorse Hillary, no doubt frustrating many women. And she didn't endorse Bernie, making many in the Bern crowd angry. She was threading the needle, as few can do. Warren has now embraced Hillary, which seems appropriate, and is campaigning aggressively with her.

".... extended her critique to the entire economy, noting that, as a result of three decades of weakened federal antitrust regulation, virtually every industrial sector today—from airlines to telecom to agriculture to retail to social media—is under the control of a handful of oligopolistic corporations. Glastris thinks the speech could change the election. But don't take our word for it. “Reigniting Competition in the American Economy” Keynote Remarks at New America’s Open Markets Program Event June 29, 2016.

Lead Poisoning: The Ignored Scandal by Helen Epstein. Lead Wars: The Politics of Science and the Fate of America’s Children by Gerald Markowitz and David Rosner University of California Press/ Milbank Memorial Fund, 298 pp., $34.95 (to be published in April) In December 1993, a slum landlord in Baltimore named Lawrence Polakoff rented an apartment to a twenty-one-year-old single mother and her three-year-old son, Max.1 A few days after they moved in, Max’s mother was invited to participate in a research study comparing how well different home renovation methods protected children from lead poisoning, which is still a major problem endangering the health of millions of American children, many of them poor. 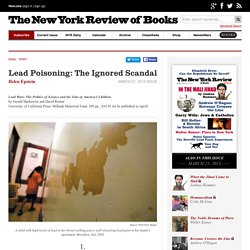 Congress had banned the sale of interior lead paint in 1978, but it remained on the walls of millions of homes nationwide, and there was no adequate federal program to deal with it. The three lead removal methods varied in cost and thoroughness. Max’s apartment received level II abatement. Minuscule amounts of lead can poison a child. Tapes reveal Enron's secret role in California's power blackouts. Newly discovered tapes have revealed how the energy corporation Enron shut down at least one power plant on false pretences, deliberately aggravating California's crippling 2001 blackouts with the aim of raising prices. 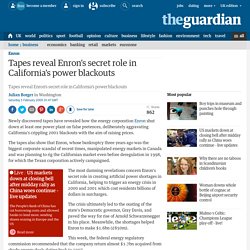 The tapes also show that Enron, whose bankruptcy three years ago was the biggest corporate scandal of recent times, manipulated energy markets in Canada and was planning to rig the Californian market even before deregulation in 1998, for which the Texan corporation actively campaigned. The most damning revelations concern Enron's secret role in creating artificial power shortages in California, helping to trigger an energy crisis in 2000 and 2001 which cost residents billions of dollars in surcharges. The crisis ultimately led to the ousting of the state's Democratic governor, Gray Davis, and paved the way for rise of Arnold Schwarzenegger in his place. 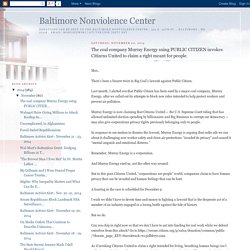 Last month, I alerted you that Public Citizen has been sued by a major coal company, Murray Energy, after we called out its attempts to block new rules intended to help protect workers and prevent air pollution. Murray Energy is now claiming that Citizens United — the U.S. Supreme Court ruling that has allowed unlimited election spending by billionaires and Big Business to corrupt our democracy — may also give corporations privacy rights previously belonging only to people. In response to our motion to dismiss the lawsuit, Murray Energy is arguing that radio ads we ran about it challenging new worker safety and clean air protections “invaded its privacy” and caused it “mental anguish and emotional distress.”

Remember, Murray Energy is a corporation. And Murray Energy sued us, not the other way around. A hearing in the case is scheduled for December 9. Www.poclad.org/BWA/files/2010-11/BWANov2010.pdf. Pulling Back the Curtain on the Organized Crime Ring That Is the Pharmaceutical Drug Cartel. Dr Marcola | Mercola | Oct 17th 2013 Even though the video above is a few years old now and bigger fines of $3 billion have been assessed to GlaxoSmithKline two years ago, it is a good summary of how the drug cartels operate. 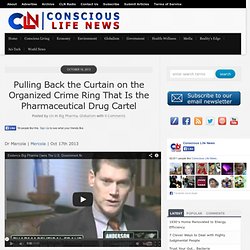 Did you know that nearly 20 percent of corporate crime is being committed by companies that make products for your health? Sad but true, no less than 19 pharmaceutical companies made AllBusiness.com’s Top 100 Corporate Criminals List for the 1990s, and the trend has continued if not increased into the 21st Century. Crimes committed by some of the most well-known drug companies include: Fabricated studiesCovering up serious problems with their drugsFalse claimsBribery, illegal kick-backs, and defrauding Medicare, Medicaid, and even the FDAImmoral threat and intimidation tactics (recall the international drug company Merck actually had a hit list of doctors to be “neutralized” or discredited for criticizing the lethally dangerous painkiller Vioxx.

We the People, Not We the Corporations.