The Network of Global Corporate Control 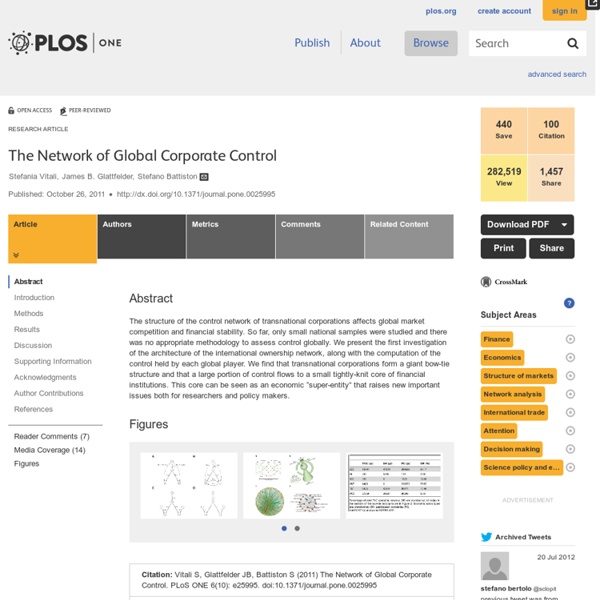 Abstract The structure of the control network of transnational corporations affects global market competition and financial stability. So far, only small national samples were studied and there was no appropriate methodology to assess control globally. We present the first investigation of the architecture of the international ownership network, along with the computation of the control held by each global player. We find that transnational corporations form a giant bow-tie structure and that a large portion of control flows to a small tightly-knit core of financial institutions. This core can be seen as an economic “super-entity” that raises new important issues both for researchers and policy makers. Citation: Vitali S, Glattfelder JB, Battiston S (2011) The Network of Global Corporate Control. Editor: Alejandro Raul Hernandez Montoya, Universidad Veracruzana, Mexico Received: March 29, 2011; Accepted: September 15, 2011; Published: October 26, 2011 Copyright: © 2011 Vitali et al. . .

Technological Revolution Threatens to Leave Humanity Behind Old-Thinker News | July 25, 2015 By Daniel Taylor As published in New Dawn Magazine (July-August edition) “…As regards the powers manifested in the aeroplane or the wireless, Man is as much the patient or subject as the possessor, since he is the target both for bombs and for propaganda… From this point of view, what we call Man’s power over Nature turns out to be a power exercised by some men over other men with Nature as its instrument.” – CS Lewis, The Abolition of Man, 1943 A strange world is emerging from crises both engineered and natural.

ATOMS Express Toys by Seamless Toy Company, Inc. And there's a little more in it for you too - if we hit $175K, we'll give every backer at the $59 pledge level and above a free Earthquake ATOM for your set (it's a vibrating motor/rumble-pack ATOM). ATOMS give kids of any age the ability to make their toys DO things. And not just new toys – ATOMS were built to work with the stuff kids already have, like LEGOs, costumes, stuffed animals, Barbies and action figures. ATOMS don’t require any electronics skills or programming experience – or supervision from a parent with an engineering degree. In fact, because of the tiny electronics built into each one, kids can make all sorts of cool stuff within 5 minutes of taking ATOMS out of the box.

Fidelity Investments FMR LLC (Fidelity Management and Research) or Fidelity Investments is an American multinational financial services corporation. It is one of the largest mutual fund and financial services groups in the world. Founded in 1946, the company has since served North American investors. Fidelity Ventures is its venture capital arm. Geoengineering Expands As Industrialized Civilization Spirals Into Collapse » Geoengineering Expands As Industrialized Civilization Spirals Into Collapse Dane Wigington geoengineeringwatch.org As the global economic house of cards continues to collapse with increasing momentum, the vast majority of global populations are, unfortunately, still looking through a very tainted and distorted lens. They cannot bring themselves to accept reality on countless fronts. Denial is especially tenacious in regard to the ongoing climate engineering atrocities occurring in our skies. Our sense of reason is our greatest gift, but for most this sense has long ago been overridden by societal conditioning, programming, and propaganda. The image below is of Dubai, a city built on sand, powered by finite fossil fuels complete with toxic geoengineered skies.

The Hegelian Dialectic: the True Culprit Yet those who favor the decentralization of political power oppose the adversarial approach. They want individuals and groups to have the greatest possible freedom and for decisions to be made in accordance with many different customs and traditions. They reject the Hegelian Dialectic in favor of an approach that is equally old: self-regulated equilibrium that does not end in agreement. This allows those of firm principles to accept and respect each other.

Random blah de blah: Flower of life part 3 the golden ratio, Fibonacci and how they relate to music! Last time i left off discussing the phi ratio and how its found in architecture from the ancient civilizations, but the phi ratio has more to it that pretty buildings and the patterns/ scales in nature, through it you can find the music and harmonics of everything in existence. It is believed that Phi is the root of all all other sequences, because every mathematical sequence needs a minimum of 3 numbers to figure out the sequence, except Phi, which only needs two, this is the only sequence that has this property. However, Phi has no beginning and no end, it is an infinite sequence, but it when it is applied to life, life does not know how to deal with something with no beginning, if Phi is the source of life, and it says "create this" life doesn't know how, because it has no beginning, so where should it start? Okay, so that's the basics behind this post, now, to move on to how Phi, Fibonacci and the binary sequence all come together. Read the flower of life part 2