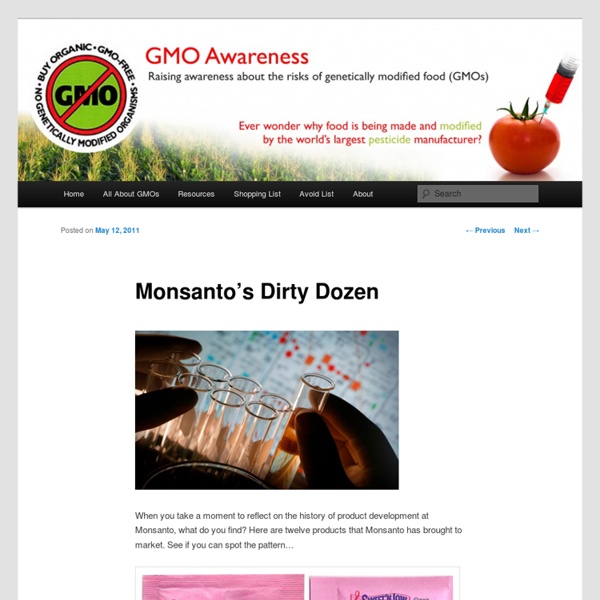 When you take a moment to reflect on the history of product development at Monsanto, what do you find? Here are twelve products that Monsanto has brought to market. See if you can spot the pattern… #1 – Saccharin Did you know Monsanto got started because of an artificial sweetener? John Francisco Queeny founded Monsanto Chemical Works in St. After mounting pressure from consumers, the Calorie Control Council, and manufacturers of artificial sweeteners and diet sodas, along with additional studies (several conducted by the sugar and sweetener industry) that reported flaws in the 1970s studies, saccharin was delisted from the NIH’s Carcinogen List. #2 – PCBs During the early 1920s, Monsanto began expanding their chemical production into polychlorinated biphenyls (PCBs) to produce coolant fluids for electrical transformers, capacitors, and electric motors. After another decade of studies, the truth could no longer be contained: the U.S. #3 – Polystyrene #4 – Atom bomb and nuclear weapons P.S.

Healthy News and Information by PAUL FASSA A recent study from Boston University and Abraxis LLC discovered troubling levels of glyphosate in honey – including “organic” honey. Glyphosate is the main ingredient in Monsanto’s toxic Roundup herbicide. The researchers tested five different types of food products for contamination: honey, corn and pancake syrup, soy milk, tofu, and soy sauce. All samples were taken from metropolitan Philadelphia grocery stores. 17 arrested as Seattle May Day protests turn violent NEW: 17 are arrested, police sayNEW: Police say eight officers are injuredMany take to the streets on May 1 to demand better working conditions (CNN) -- A May Day protest in downtown Seattle turned violent Wednesday night, with police saying they resorted to pepper spray to disperse demonstrators who pelted them with whatever was at hand. Seattle Police said the crowd tossed rocks, bottles, metal pipes, fireworks -- and even a skateboard. The clashes left eight officers with injuries, and police said they arrested 17 people, on various offenses including property destruction and assault.

Collective Web In previous posts, especially in those related to content mapping, I frequently referred to collective actions and efforts in describing certain concepts, but never elaborated on the exact meaning of these terms. One could think that collectivity and collaboration are identical (they often are mentioned in the same context) as both have something to do with individuals working together. In fact, I find it important to highlight their differences for I expect collectivity to play as vital a role in Web 3.0 as collaboration did in Web 2.0. Transition As already understood from popular Web 2.0 applications such as Wikipedia, Google Docs, or WordPress, we define collaboration as sharing workload in a group of individuals who engage in a complex task, working towards a common goal in a managed fashion, and are conscious of the process’ details all the way. Different realms

Why Glyphosate Should Be Banned Institute of Science in Society Special Report 10/10/12 Glyphosate has contaminated land, water, air, and our food supply; the maximum permitted levels are set to rise by100-150 times in the European Union if Monsanto gets its way as damning evidence of serious harm to health & the environment piles up Dr Eva Sirinathsinghji and Dr Mae-Wan Ho A fully referenced and illustrated version of this report is posted on ISIS members website and is otherwise available for download here Please circulate widely and repost, but you must give the URL of the original and preserve all the links back to articles on our website. If you find this report useful, please support ISIS by subscribing to our magazine Science in Society, and encourage your friends to do so. Or have a look at the ISIS bookstore for other publications

Local Foods - Bellingham Real Food - Local WAPF Chapter Bellingham, WA 98226 Phone: (360) 610-7740 Brittle Barn Farms is a start-up poultry farm founded in 2012 in Bellingham, Washington. Owned and operated by environmentally conscious, young farmers, Brittle Barn utilizes traditional meth­ods of raising livestock with responsible land-stewardship, an eye toward food justice, and minimal fossil fuel input. The farm is comprised of 5-acres of pasture, wetlands, and young woodlands located just outside of Bellingham city limits. Survey of Glyphosate Residues in Honey, Corn and Soy Products Abstract Samples of honey (sixty nine), pancake and corn syrup (twenty six), soy sauce (twenty eight), soy milk (eleven), and tofu (twenty) purchased in the Philadelphia, US metropolitan area were analyzed for glyphosate residue using ELISA. The limit of quantification (LOQ) and range of the method were determined for honey, pancake syrup, and corn syrup to be 15 to 800 ppb; soy sauce, soy milk, and tofu 75 to 4,000 ppb. Glyphosate residues above the limit of quantification were not found in pancake and corn syrup, soy milk, and tofu. Of the sixty-nine honey samples analyzed, forty-one samples, or fifty-nine percent (59%), had glyphosate concentrations above the method LOQ (15 ppb), with a concentration range between 17 and 163 ppb and a mean of 64 ppb.

15 photos of Seattle May Day mayhem and destruction; plus bonus video SMH at people involved in the Seattle May Day... like seriously? #SeaMayDay— Nicholi (@NichWyto) May 02, 2013 Pictures are worth 1,000 words. Here are 15 photos of the May Day 2013 mayhem in Seattle tonight. This is what addled, muddled, “peaceful” protest on behalf of illegal aliens/anti-capitalism/anti-imperialism/anti-whatever looks like. SynapticWeb / FrontPage Stay updated about the Synaptic Web on Twitter via @SynapticWeb The Synaptic Web By Khris Loux, Eric Blantz, Chris Saad and you... The Internet is constantly evolving. As the speed, flexibility and complexity of connections increase exponentially, the Web is increasingly beginning to resemble a biological analog; the human brain. But what exactly is it that’s makes us, or the Web, smart?

Healthy News and Information by DR. MERCOLA Aluminum has been long known to be neurotoxic, with mounting evidence that chronic exposure is a factor in many neurological diseases, including dementia, autism, and Parkinson’s disease. However, definitive scientific proof is difficult to establish due to the the lack of longitudinal studies, as well as pushback from industries that use aluminum in their products. Polyamory: Common Mistakes With grateful acknowledgement to Suzie, for her insight and contributions There is an excellent guide to screwing up poly relationships on the alt.polyamory site, which describes in some detail the petty, meanspirited, malicious things that you can do to help ensure that your relationship fails in the most dramatic, painful way possible. This is not that page. This page is designed to describe some of the mistakes you can make in a non-monogamous relationship even if you are compassionate, honest, and well-intentioned.

Workplace Social Software Analyst Report Learn, Collaborate, Connect, Close: Best-in-Class Mobile Sales Enablement For as long as sales and account management professionals have closed deals and supported customers, they have traveled to client locations, business events, and tradeshows. Today’s business-to-business (B2B) front-line staffers are empowered more than ever with technology platforms, applications, and connectivity enablers to help them “seal the deal” more efficiently than ever before. Based initially on Aberdeen’s Sales Effectiveness research into Sales Mobility and other studies focused on Social Selling, Sales Training, and Rich Media, this research brief introduces the concept of the seller capable of collaborating seamlessly with team members to effectively perform; from anywhere, anytime, and any device.

Say Hello to the 100 Trillion Bacteria That Make Up Your Microbiome Hannah Whitaker for The New York Times. Prop stylist: Emily Mullin. I clicked open a file called Taxa Tables, and a colorful bar chart popped up on my screen. Each bar represented a sample taken (with a swab) from my skin, mouth and feces. Is Google Places Search Permanently Closed? Google has removed the link to Places search. The link, which had been located in Google's "More" drop-down menu option, is no longer there, meaning local businesses can only be found via search (paid or organic), Google+ Local, or Google Maps. Image via Understanding Google Maps & Local Search Also, when Google shows a 7-pack of local results, there is no longer an option to see "More results near [location]". Why did this go? According to Google's Jade Wang:

businessinsider For the twenty-something consumer, the word ‘organic,’ triggers an internal struggle between a desire for healthy living and skepticism of food trends. While peer-reviewed studies can tell you what compounds you can avoid by going organic, they might not explain what the bottom line is in terms of your health. They certainly cannot tell you whether it’s worth a price premium to buy organic foods. Here’s what we do know: if you eat non-organic goods, you are eating pesticides. The evidence is in your pee. To prove that point, Swedish grocery chain Coop Svierge AB took a family of five off of conventional products and stocked their kitchen with solely organic food.