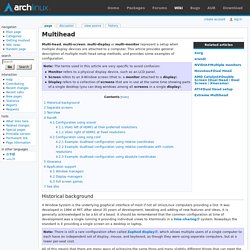 This article provides general description of multiple multi-head setup methods, and provides some examples of configuration. Note: The terms used in this article are very specific to avoid confusion: Monitor refers to a physical display device, such as an LCD panel. Screen refers to an X-Window screen (that is: a monitor attached to a display). Display refers to a collection of screens that are in use at the same time showing parts of a single desktop (you can drag windows among all screens in a single display).

Historical background X Window System is the underlying graphical interface of most if not all Unix/Linux computers providing a GUI. All of this means that there are many ways of achieving the same thing and many slightly different things that can meet the same purpose. Separate screens # Launch a terminal on the second screen $ DISPLAY=:0.1 urxvt & AMD Catalyst. Owners of ATI/AMD video cards have a choice between AMD's proprietary driver (catalyst) and the open source driver (xf86-video-ati). 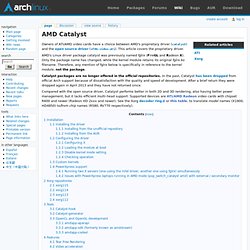 This article covers the proprietary driver. AMD's Linux driver package catalyst was previously named fglrx (FireGL and Radeon X). Only the package name has changed, while the kernel module retains its original fglrx.ko filename. Therefore, any mention of fglrx below is specifically in reference to the kernel module, not the package. Catalyst packages are no longer offered in the official repositories. Compared with the open source driver, Catalyst performs better in both 2D and 3D rendering, also having better power management, but it lacks efficient multi-head support. Installation. API Reference. ATIProprietaryDriver. Since the Radeon R200 chipset series ATI/AMD is providing its own set of closed source binary only drivers for their hardware. 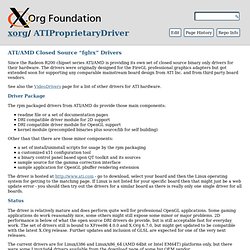 The drivers were originally designed for the FireGL professional graphics adapters but got extended soon for supporting any comparable mainstream board design from ATI Inc. and from third party board vendors. See also the VideoDrivers page for a list of other drivers for ATI hardware. RadeonProgram. This page is only for the open source Xorg Radeon drivers. radeon (xf86-video-ati) for 2D; radeon, r200 Mesa Classic drivers and r300, r600 Gallium drivers only. 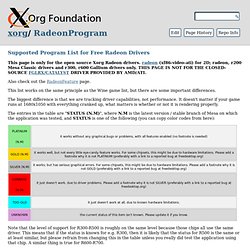 THIS PAGE IS NOT FOR THE CLOSED-SOURCE FGLRX/CATALYST DRIVER PROVIDED BY AMD/ATI. Also check out the RadeonFeature page. This list works on the same principle as the Wine game list, but there are some important differences. The biggest difference is that we are tracking driver capabilities, not performance.

It doesn't matter if your game runs at 1680x1050 with everything cranked up, what matters is whether or not it is rendering properly. The entries in the table are "STATUS (N.M)", where N.M is the latest version / stable branch of Mesa on which the application was tested, and STATUS is one of the following (you can copy color codes from here): Note that the level of support for R300-R500 is roughly on the same level because those chips all use the same driver. 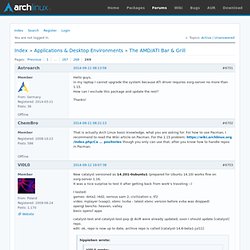 Cool, let me know what you come up with. I think the problems in instability were caused by 3.17 rc kernel because it was happening only when I was compiling on a (tmpfs) ramdisk while watching vaapi videos. List of AMD graphics processing units. Mesa/mesa - The Mesa 3D Graphics Library. Bug List. Xorg/driver/xf86-video-ati - ATI video driver. Glxinfo. Glxinfo is a command-line tool that can help you diagnose problems with your 3D acceleration setup. 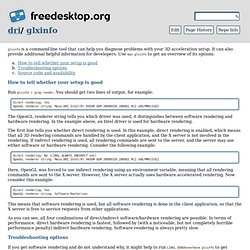 It can also provide additional helpful information for developers. Use man glxinfo to get an overview of its options. How to tell whether your setup is good Run glxinfo | grep render. Steam. Steam is a digital distribution, digital rights management, multiplayer and communications platform developed by Valve Corporation. 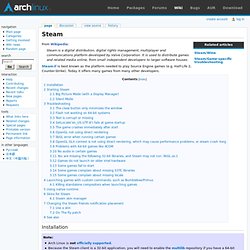 It is used to distribute games and related media online, from small independent developers to larger software houses. Steam is best known as the platform needed to play Source Engine games (e.g. Half-Life 2, Counter-Strike). Today it offers many games from many other developers. Installation. ATI. Owners of AMD (previously ATI) video cards have a choice between AMD's proprietary driver (catalyst) and the open source driver (xf86-video-ati). 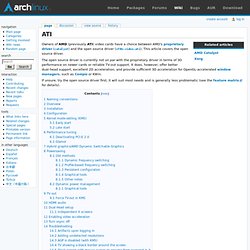 This article covers the open source driver. The open source driver is currently not on par with the proprietary driver in terms of 3D performance on newer cards or reliable TV-out support. It does, however, offer better dual-head support, excellent 2D acceleration, and provide sufficient 3D acceleration for OpenGL-accelerated window managers, such as Compiz or KWin. If unsure, try the open source driver first, it will suit most needs and is generally less problematic (see the feature matrix for details). Naming conventions The Radeon brand follows a naming scheme that relates each product to a market segment. For a table of core and product series, see Wikipedia:Comparison of AMD graphics processing units. Glassy Mesa Project - Intro and Status - LunarG.

LunarG received funding from Valve to explore the possibility of game performance improvements using the LunarGLASS technology in the Mesa driver, specifically the potential for FPS improvements through shader runtime improvements. 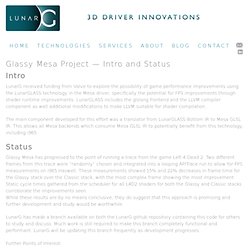 LunarGLASS includes the glslang frontend and the LLVM compiler component as well additional modifications to make LLVM suitable for shader compilation. The main component developed for this effort was a translator from LunarGLASS Bottom IR to Mesa GLSL IR. This allows all Mesa backends which consume Mesa GLSL IR to potentially benefit from this technology, including i965. Glassy Mesa has progressed to the point of running a trace from the game Left 4 Dead 2.

Two different frames from this trace were “randomly” chosen and integrated into a looping APITrace run to allow for FPS measurements on i965 Haswell. LunarG has made a branch available on both the LunarG github repository containing this code for others to study and discuss. Known issues with AMD graphics support.