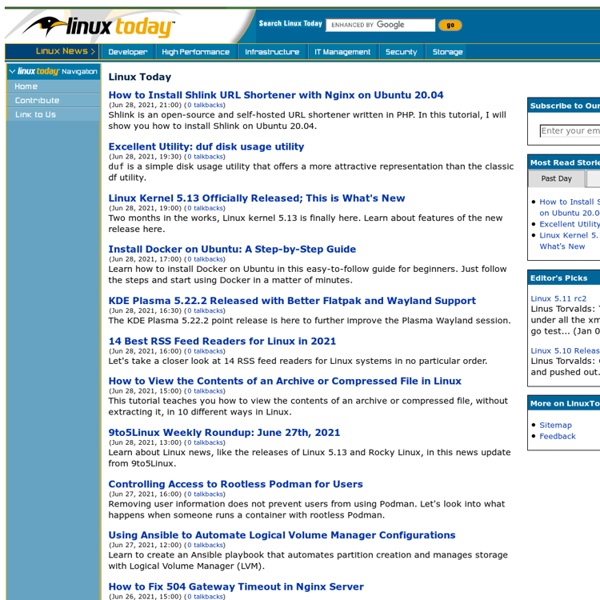 (Apr 12, 2014, 06:00) (0 talkbacks) eWEEK: The decade's most serious security issue was packaged and branded, but many server administrators and service providers were left in the dark. (Apr 11, 2014, 23:00) (0 talkbacks) Xmodulo: A startup called Spritz raised 3.5 Millions in seed money to develop an API that supposedly allows a user to read 1,000 words per minute. (Apr 11, 2014, 19:00) (0 talkbacks) Silicon Angle: The Raspberry Pi Compute Module is a version with exactly the same hardware as the original Raspberry Pi, but comes with DDR2 SODIMM format.

Linux Mint vs. Ubuntu: the Best Option? For the last few years, there has been something of a popularity contest between two well-known Linux distros: Linux Mint and Ubuntu. Both of these distributions share the same code base, as Ubuntu is based on Debian and Linux Mint is based on Ubuntu. In both instances, the distributions took the foundation that Debian built, then added their own flavor to make it more user friendly. The similarities between the two distributions go even further, in that Ubuntu packages work flawlessly on Linux Mint, just as Ubuntu PPAs work well on Linux Mint. When Linux Mint was first being developed, the degree of separation from Ubuntu was very minimal. The first few releases of Linux Mint were considered to be a "re-branded" version of Ubuntu using a slightly different desktop theme.

iTunes syncing now works in Linux with Wine Linux users aren't exactly known as big fans of proprietary software, but sometimes a big commercial app comes in handy. iTunes has been up and running on Linux for a while now, but it was missing one big reason to choose it over an open source music player: iPod Touch and iPhone syncing. These two Apple gadgets need to be unlocked to work with a third-party music player. But now iTunes on Linux is reportedly able to recognize and sync all iPod models, including the Touch and the iPhone. Maarten Lankhorst recently alerted the wine-devel mailing list that he got iPod-iTunes syncing to work on a Linux system with Wine, iTunes 7.6, and minimal patches. Good news for anyone whose 'Pod wasn't supported by the available open source apps. There's still a little more work to be done before this will work on unpatched Wine: direct access to the device in explorer is not supported, although it should be coming soon.

compiz freeze [Archive] even5 September 23rd, 2012, 02:44 AM I see a compiz freeze (compiz cpu goes to 100%) whenever I log in using the "ubuntu" (i.e., unity 3D) window manager selection, and open a file with an editor. I usually do this using vi in an xterm window, but I've checked out gedit with the same result. IEEE Security and Privacy Magazine E-biobanking: What Have You Done to My Cell Samples? The rise in biobanking (collecting and storing human biological material) has increased the need to store large quantities of related data and make that data available to researchers and others. However, this introduces concerns regarding data security and dependability. The BiobankCloud project is developing technology to help create e-biobanking ecosystems based on a secure, dependable private-public "cloud of clouds" accessed through platform-as-a-service interfaces.

Valve: Linux More Viable Than Windows 8 for Gaming In a presentation at Ubuntu Developer Summit currently going on in Denmark, Drew Bliss from Valve said that Linux is becoming more viable platform as an alternative to Windows 8. Windows 8 ships with its own app store and it is moving away from an open platform model. Some other points from the talk: 5 Great iTunes Replacements for Managing iPod in Linux We all love the iPod, but sadly, Apple is still not kind enough to provide an iPod manager for those of us who use Linux. However, this is not really a big issue nowadays as there are other means to manage your iPod under Linux. Thanks to these excellent free and open source media players that are certified to handle your iPod the way iTunes can.BansheeBanshee is built upon Mono and Gtk# and uses the GStreamer multimedia platform for encoding, and decoding various media formats, including Ogg Vorbis, MP3 and FLAC. Banshee can play, import, and burn audio CDs, and supports many portable media players, including Apple's iPod. Music stored on the iPod can be played without synchronization, and album art stored in the Banshee library is transferred to the iPod.

50 User Interface Design Tools A Web Designer Must Have The success of web applications and websites depends in how well designed the User Interface is. Designing a good user interface however is a very challenging process. A designer’s concepts and design decisions always affect the end users of the web site, application or generally any user interface or service he has designed. That is why, the dream of every designer is to deliver high quality, enjoyable and valuable experiences for the users. To achieve this goal, it is necessary that a web designer have a collection of web user interface resources and building blocks in his arsenal.

20 Linux Server Hardening Security Tips Securing your Linux server is important to protect your data, intellectual property, and time, from the hands of crackers (hackers). The system administrator is responsible for security Linux box. In this first part of a Linux server security series, I will provide 20 hardening tips for default installation of Linux system. Service Data Objects - JSR# 235 Status: Final JCP version in use: 2.6 Java Specification Participation Agreement version in use: 2.0 Description: Defines core infrastructure APIs for heterogeneous data access that supports common application design patterns and supports higher-level tools and frameworks. Please direct comments on this JSR to the Spec Lead(s)

Debian Kit for Android This kit installs a full version of Debian or Ubuntu on your Android phone or tablet. Key features are: Debian and Android side-by-side - your Android device works as usual but you can unleash the power of Debian / Ubuntu on demand. Easy installation, provided that you have a fast Internet connection and you are familiar with Linux command lines to some extent. You can use a compiler, install a GUI (e.g. LXDE), and run any software that is offered by Debian / Ubuntu including command line driven daemons as well as GUI software.

Cool beans. I have Ubuntu 13.10 as well, and I'm gonna spend more time with it. What do you like about the latest version thus far? by williamellerbe Oct 18

Per the information I saw through Linux Today, I will be getting ready for Ubuntu 13.10 by williamellerbe Oct 16