Ditch the Toxic Sunscreen; Use Coconut Oil Instead. By: Paul FassaNatural Society Summer time is beach time, or at least poolside time. 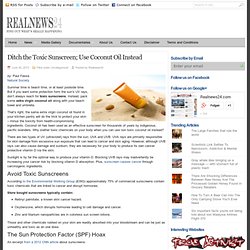 But if you want some protection form the sun’s UV rays, don’t always reach for toxic sunscreens. Instead, pack some extra virgin coconut oil along with your beach towel and umbrella. That’s right, the same extra virgin coconut oil found in your kitchen pantry will do the trick to protect your skin – minus the toxicity from health-compromising ingredients. Coconut oil has been used as an effective sunscreen for thousands of years by indigenous, pacific islanders. There are two types of UV (ultraviolet) rays from the sun: UVA and UVB. Sunlight is by far the optimal way to produce your vitamin D. Avoid Toxic Sunscreens According to the Environmental Working Group (EWG) approximately 75% of commercial sunscreens contain toxic chemicals that are linked to cancer and disrupt hormones. 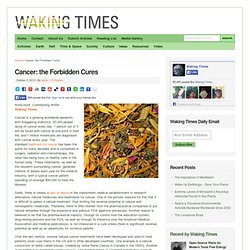 The Proven Cure and Prevention for Cancer the Medical Establishment Doesn't Want You to Know (Part II) (NaturalNews) The Budwig protocol is the food treatment and cure for cancer and other major debilitating diseases created by Dr. 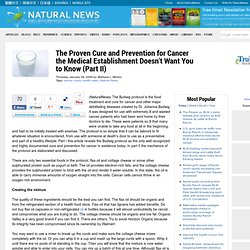 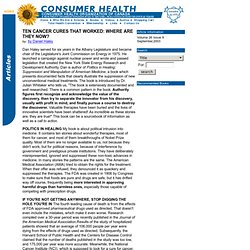 By: by Daniel Haley Dan Haley served for six years in the Albany Legislature and became chair of the Legislature's Joint Commission on Energy in 1975. He launched a campaign against nuclear power and wrote and passed legislation that created the New York State Energy Research and Development Authority. Dan is author of Politics in Healing: Suppression and Manipulation of American Medicine, a book which presents documented facts that clearly illustrate the suppression of new unconventional medical treatments. The book is introduced by Dr. POLITICS IN HEALING My book is about political intrusion into medicine. IF YOU'RE NOT GETTING ANYWHERE, STOP DIGGING THE HOLE YOU'RE IN The fourth leading cause of death is from the effects of FDA approved pharmaceutical drugs used as directed. Learn about the amazing health benefits of juicing raw cannabis (marijuana) leaves.

(NaturalNews) Contrary to popular belief, the marijuana plant is a whole lot more than just a psychoactive drug that "stoners" use to get high. 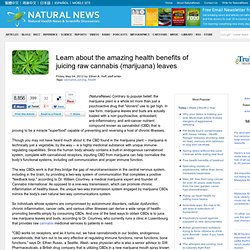 In raw form, marijuana leaves and buds are actually loaded with a non-psychoactive, antioxidant, anti-inflammatory, and anti-cancer nutrient compound known as cannabidiol (CBD) that is proving to be a miracle "superfood" capable of preventing and reversing a host of chronic illnesses. Though you may not have heard much about it, the CBD found in the marijuana plant -- marijuana is technically just a vegetable, by the way -- is a highly medicinal substance with unique immune-regulating capabilities. 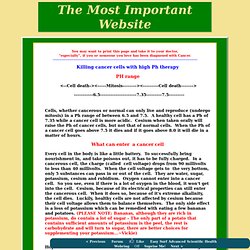 Sartori Certain foods contain biologically active compounds and/or ingredients, i.e., vitamins, inorganic salts, organic compounds, essential fatty acids, minerals, and chelating agents which may either precipitate or prevent cancer development. The relationship between dietary consumption and cancer development is not clear and further investigation continues. Noteworthy is the report on the presence of high levels of cesium [Cs] and rubidium [Rb] in food along with availability of various supportive compounds as vitamins A and C, along with zinc and selenium in diet of populations residing in areas with low incidence of cancer e.g., the Hopi Indian territory in Arizona, the Hunza area in North Pakistan, and the volcanic regions of Brazil. The diet of these populations is similar to the nutritive requirements for the high Ph cancer therapy developed by Brewer's subsequent series of physical experiments with cancer cells. 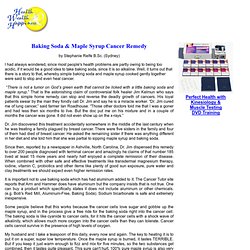 (Sydney) I had always wondered, since most people's health problems are partly owing to being too acidic, if it would be a good idea to take baking soda, since it is so alkaline. Well, it turns out that there is a story to that, whereby simple baking soda and maple syrup cooked gently together were said to stop and even heal cancer. “There is not a tumor on God’s green earth that cannot be licked with a little baking soda and maple syrup.” Dr. Gerson Diet For A Healthy Person. The Gerson diet is a whole-body approach to healing that uses organic foods, detoxification methods and supplementation to enhance the body’s natural ability to heal itself. 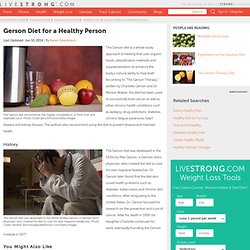 According to “The Gerson Therapy,” written by Charlotte Gerson and Dr. Morton Walker, the diet has been used to successfully treat cancer as well as other chronic health conditions such as epilepsy, drug addictions, diabetes, chronic fatigue syndrome, heart disease and kidney disease. The authors also recommend using the diet to prevent disease and maintain health. The Gerson diet was developed in the 1920s by Max Gerson, a German-born physician, who created the diet to cure his own migraine headaches. Dr. Max Gerson Diet. The Gerson Diet is a highly controversial treatment for cancer, although the Gerson Institute claims it also cures heart disease, diabetes and arthritis. 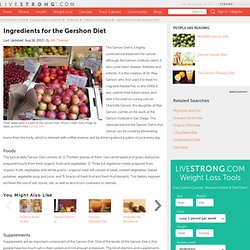 It is the creation of Dr. Max Gerson, who first used it to treat his migraine headaches. Strategies to Kill Cancer.