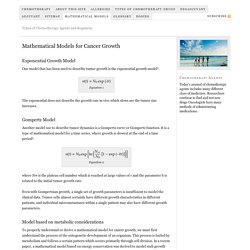 Equation 1 The exponential does not describe the growth rate in vivo which slows are the tumor size increases. Gompertz Model Another model use to describe tumor dynamics is a Gompertz curve or Gompertz function. Equation 2 where N∞ is the plateau cell number which is reached at large values of r and the parameter b is related to the initial tumor growth rate. Just 5% of terminally-ill cancer patients understand the depth of their situation. Only a fraction of the cancer patients in the terminal stages of their illness fully understand their prognosis. 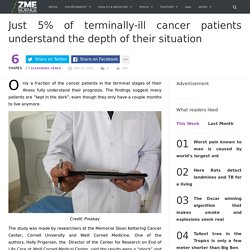 The findings suggest many patients are “kept in the dark”, even though they only have a couple months to live anymore. Credit: Pixabay The study was made by researchers at the Memorial Sloan Kettering Cancer Center, Cornell University and Weill Cornell Medicine. One of the authors, Holly Prigerson, the Director of the Center for Research on End of Life Care at Weill Cornell Medical Center, said the results were a “shock” and highlight a grave communication problem between doctors and patients. The doctors asked 178 cancer patients questions about their medical condition and future prognosis. Only five percent of the interviewed patients made statements that actually reflected the reality of their medical records before their illness was stage. Radiology, News, Education, Service. Current breast MRI protocols are designed for diagnostic rather than screening purposes and are therefore time-consuming to acquire and read -- which contributes to the modality's relatively higher cost and limited availability, she noted in a presentation on 7 September at the American Society of Clinical Oncology (ASCO) 2013 Breast Cancer Symposium (BCS) in San Francisco. 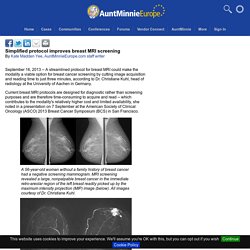 A 56-year-old woman without a family history of breast cancer had a negative screening mammogram. MRI screening revealed a large, nonpalpable breast cancer in the immediate retro-areolar region of the left breast readily picked up by the maximum intensity projection (MIP) image (below). All images courtesy of Dr.

Christiane Kuhl. Kuhl and colleagues investigated whether a streamlined protocol, consisting only of the first postcontrast subtracted images and their maximum intensity projection (MIP) reconstructions, would be suitable for screening purposes. Dr. Related Reading Copyright © 2013 AuntMinnieEurope.com. Maintenance Therapy With Tumor-Treating Fields Plus Temozolomide vs Temozolomide Alone for Glioblastoma:  A Randomized Clinical Trial. Importance Glioblastoma is the most devastating primary malignancy of the central nervous system in adults. 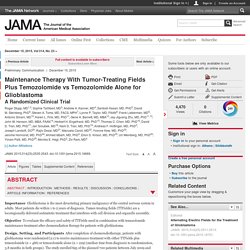 Most patients die within 1 to 2 years of diagnosis. Tumor-treating fields (TTFields) are a locoregionally delivered antimitotic treatment that interferes with cell division and organelle assembly. Objective To evaluate the efficacy and safety of TTFields used in combination with temozolomide maintenance treatment after chemoradiation therapy for patients with glioblastoma. 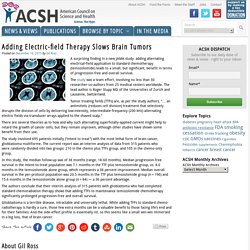 The study was a team effort, involving no less than 30 researcher-co-authors from 25 medical centers worldwide. The lead author is Roger Stupp MD of the Universities of Zurich and Lausanne, Switzerland. Tumor treating fields (TTFs) are, as per the study authors, “… an antimitotic (reduces cell division) treatment that selectively disrupts the division of cells by delivering low-intensity, intermediate-frequency (200 kHz) alternating electric fields via transducer arrays applied to the shaved scalp.” There are several theories as to how and why such alternating superficially-applied current might help to retard the growth of cancer cells, but they remain unproven, although other studies have shown some benefit from their use. Meet In Italy for Life Sciences 2015. Tumori: scoperta la strada per soffocarli. “Soffocare” le cellule del tumore per distruggerle una ad una, colpendo esclusivamente le cellule malate: a questo è giunta la scoperta, condotta su topi, che potrebbe aprire la strada a nuove cure contro questa malattia. 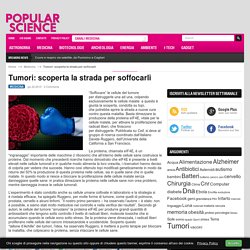 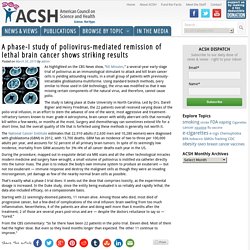 Using standard biotech methods, (very similar to those used in GM technology), the virus was modified so that it was missing certain components of the natural virus, and therefore, cannot cause polio. The study is taking place at Duke University in North Carolina. Led by Drs. Darell Bigner and Henry Friedman, the 22 patients overall received varying doses of the polio viral infusion, in an effort to stem the advance of one of the worst, most aggressive and treatment-refractory tumors known to man: grade-4 astrocytoma, brain cancer with wildly aberrant cells that normally kill within a few weeks, or months at the most. Imaging in Glioblastoma Multiforme. T1-weighted axial gadolinium-enhanced magnetic resonance image demonstrates an enhancing tumor of the right frontal lobe. 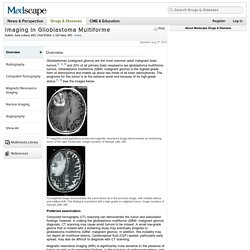 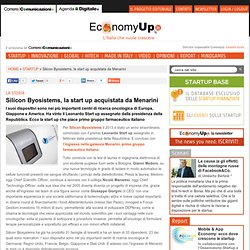 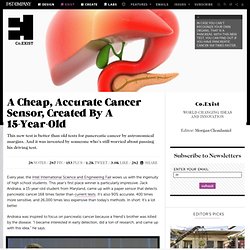