Genetically Modified Chickens Lay Eggs Containing Anti-Cancer Drug. Chicken/Egg Problem The eggs laid by a group of “pampered” hens in the U.K. contain something special in their whites. 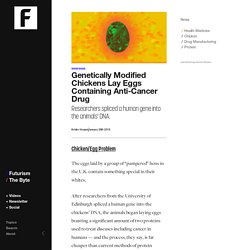 After researchers from the University of Edinburgh spliced a human gene into the chickens’ DNA, the animals began laying eggs boasting a significant amount of two proteins used to treat diseases including cancer in humans — and the process, they say, is far cheaper than current methods of protein production. “Production from chickens can cost anywhere from 10 to 100 times less than the factories,” researcher Lissa Herron told the BBC. “So hopefully we’ll be looking at at least 10 times lower overall manufacturing cost.” Protein Packed The human body naturally produces the proteins found in the new hen eggs — IFNalpha2a and macrophage-CSF, if you’re wondering — and they each play an important role in the immune system.

The genetically modified chickens, which live “pampered” lives in large pens, are none the wiser either, according to Herron. Experimental cancer vaccine combo has 100% success rate in mice. A promising new cancer vaccine has shown the ability to ward off, and stop the return, of aggressive cancer cells. 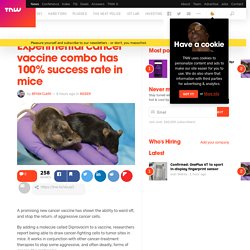 By adding a molecule called Diprovocim to a vaccine, researchers report being able to draw cancer-fighting cells to tumor sites in mice. It works in conjunction with other cancer-treatment therapies to stop some aggressive, and often deadly, forms of cancer, like melanoma. “This co-therapy produced a complete response — a curative response — in the treatment of melanoma,” said the study’s co-author, Professor Dr. Dale Boger of Scripps Research. The vaccine also prompts the immune system to produce the same targeted response should the cells ever return , according to Boger and Nobel laureate Bruce Beutler, of University of Texas Southern. Doctors hail world first as woman’s advanced breast cancer is eradicated.

A woman with advanced breast cancer which had spread around her body has been completely cleared of the disease by a groundbreaking therapy that harnessed the power of her immune system to fight the tumours. 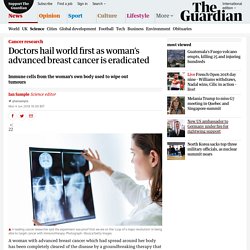 It is the first time that a patient with late-stage breast cancer has been successfully treated by a form of immunotherapy that uses the patient’s own immune cells to find and destroy cancer cells that have formed in the body. The 49-year-old woman was selected for the radical new therapy after several rounds of routine chemotherapy failed to stop a tumour in her right breast from growing and spreading to her liver and other areas. Doctors who cared for the woman at the US National Cancer Institute in Maryland said woman’s response had been “remarkable”: the therapy wiped out cancer cells so effectively that the patient has now been free of the disease for two years. Next, the doctors extracted immune cells known as tumour infiltrating lymphocytes, or TILs, from the tumour biopsies.

Breakthrough on cancer as treatment stops disease coming back. A study on lung cancer patients found that activating the immune system can prompt tumours into spreading friendly T-cells around the body, significantly reducing the chance of cancer returning after surgery. 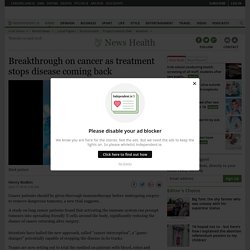 Scientists have hailed the new approach, called "cancer interception", a "game-changer" potentially capable of stopping the disease in its tracks. Teams are now setting out to trial the method on patients with blood, colon and ovarian cancers in what could be the start of a fundamental shift in treatment of the disease.

Keytruda Plus Chemotherapy More Effective For Lung Cancer : Shots - Health News. A combination of an immunotherapy drug from Merck and standard chemotherapy led to improved survival for cancer patients. 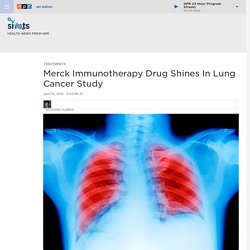 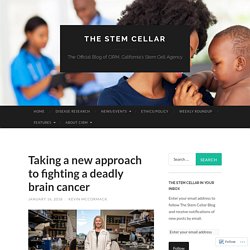 In anticipation of that we are highlighting some of the key elements from the report here on the Stem Cellar. One of the most exciting new approaches in targeting deadly cancers is chimeric antigen receptor (CAR) T-cell therapy, using the patient’s own immune system cells that have been re-engineered to help them fight back against the tumor. Today we are profiling City of Hope’s Christine Brown, Ph.D., who is using CAR-T cells in a CIRM-funded Phase 1 clinical trial for an aggressive brain cancer called malignant glioma.

“Brain tumors are the hardest to treat solid tumors. A Cheap, Portable Skin Cancer Detector Has Won the Dyson Award. In Brief A team of engineering graduates has won the prestigious James Dyson Award for their cheap and portable device that can detect melanoma, a form of skin cancer. 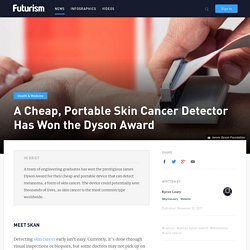 The device could potentially save thousands of lives, as skin cancer is the most common type worldwide. Meet sKan Detecting skin cancer early isn’t easy. Scientists find natural mimetics of anti-cancer & anti-aging drugs metformin and rapamycin. Wednesday, Nov. 29, 2017, London, UK: Researchers from the Biogerontology Research Foundation, Insilico Medicine, Life Extension and other institutions announce the publication of a landmark study in the journal Aging on the identification of natural mimetics of metformin and rapamycin. 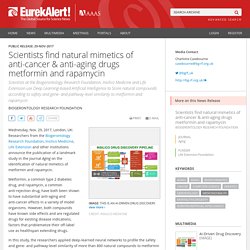 Metformin, a common type 2 diabetes drug, and rapamycin, a common anti-rejection drug, have both been shown to have substantial anti-aging and anti-cancer effects in a variety of model organisms. However, both compounds have known side effects and are regulated drugs for existing disease indications, factors that problematize their off-label use as healthspan extending drugs. Scientists Discovered a "Kill Switch" That Destroys Any Cancer Cell. Researchers Find "Executioner Protein" That Causes Cancer Cells to Self-Destruct Without Hurting Healthy Cells.

In Brief Scientists have discovered a way to use the "executioner protein" BAX to induce apoptosis in cancer cells while leaving healthy cells intact. The treatment has so far been applied only to acute myeloid leukemia (AML) cells but may have broader uses. Intermountain Healthcare diving into the past in hopes of changing future cancer treatment. A Fast, Affordable Blood Test Could Change How We Treat Cancer Forever. In Brief A revolutionary technique in oncology research that requires just a simple blood draw shows great promise in detecting cancers early. 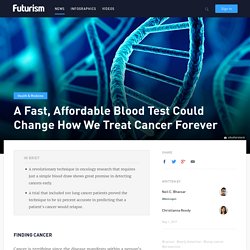 A New Treatment Destroyed Breast Cancer Tumors in 11 Days Without Chemo. Drug Combination A new clinical trial demonstrated positive effects caused by the drug combination lapatinib and trastuzumab against HER2 positive breast cancer in a treatment period of just 11 days. 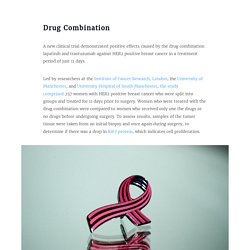 Led by researchers at the Institute of Cancer Research, London, the University of Manchester, and University Hospital of South Manchester, the study comprised 257 women with HER2 positive breast cancer who were split into groups and treated for 11 days prior to surgery. Women who were treated with the drug combination were compared to women who received only one the drugs or no drugs before undergoing surgery.

To assess results, samples of the tumor tissue were taken from an initial biopsy and once again during surgery, to determine if there was a drop in Ki67 protein, which indicates cell proliferation. Susana Soares’ Glass Device Uses Honey Bees to Detect Cancer. At last year’s Dutch Design Week in Eindhoven, Portuguese designer Susana Soares presented a device that can detect cancer and other diseases using honey bees. Known for their extraordinary sense of smell, bees can detect airborne molecules in the parts per trillion range and can be trained to recognize certain smells associated with diseases such as lung, skin and pancreatic cancer, as well as tuberculosis.

The device is made out of two chambers. "Game-Changing" Immunotherapy Drug Doubles Cancer Survival Rates. An immunotherapy drug is being hailed as a “game-changer” by cancer researchers following a successful clinical trial. In the study, survival rates after one year were more than twice as high among patients who were treated with the drug – called nivolumab – than those who received chemotherapy.

Many cancers outsmart the body’s immune system in order to avoid being destroyed by it, which is why scientists are now increasingly focusing on immunotherapy – whereby the immune system is recruited to fight off pathogens – in the quest to defeat cancer. Cutting Out Cancer: CRISPR Gene Editing Could Make Cancer Mutations Inactive. In Brief When CRISPR-Cas9 was developed, it opened up genetic engineering to a number of applications previously thought of as impossible. Technology for Killing Metastatic Breast Cancer Cells Discovered, Licensed - UCF News - University of Central Florida Articles.

A UCF College of Medicine cancer researcher has discovered a way to kill spreading breast cancer cells and her new technology has generated a licensing agreement that will accelerate the therapy’s path to clinical trials. Metastatic cancer cells that spread from the original tumor to the brain, lungs and bones are the leading cause of death for most cancer patients, said Annette Khaled, the researcher who made the discovery. Her work is featured in the September edition of Clinical Cancer Research. In the study, she details how the peptide CT20, which she discovered in 2012, kills fleeing cells.

Setting the Body’s ‘Serial Killers’ Loose on Cancer. Dr. June’s 2011 publications did not cite Dr. Rosenberg’s paper from the previous year, prompting Dr. Rosenberg to write a letter to The New England Journal of Medicine. Explicit cookie consent. “CURE” is not a word much used by oncologists. The best they normally talk of is “remission”. New device could improve cancer detection. Radiation and immunotherapy combination can destroy both primary and secondary tumors. Radiation therapy not only kills cancer cells, but also helps to activate the immune system against their future proliferation. However, this immune response is often not strong enough to be able to cure tumors, and even when it is, its effect is limited to the area that has been irradiated.

Now, however, research to be presented to the ESTRO 35 conference today (Sunday) has shown that the addition of an immune system-strengthening compound can extend the radiation therapy-induced immune response against the tumor sites and that this response even has an effect on tumours outside the radiation field. A combination of radiation therapy and L19-IL2, an immunotherapy agent, can increase significantly the immune response when given to mice with primary colorectal tumors.

Thanks to a scientific breakthrough from Stanford University electrical engineers, the latest sci-fi gadget turned reality is a "tricorder," a la the Star Trek device that lets users (like medical everyman Dr. Leonard McCoy) diagnose illnesses from a few inches away, doing away with invasive pricks and pokes. While it isn't a spitting image of Star Trek's fictional technology (it isn't the 24th century yet), the concept, called "noncontact thermoacoustic detection" in the team's Applied Physics Letters paper, could detect early-stage cancers with electromagnetic energy. The idea is that tumors grow additional blood vessels to continue growing, and that growth would show up as "hot spots" on an ultrasound.