Angelina Jolie’s breast cancer surgeon dubbed “dangerous” for urging women to buy organic and eat fresh berries to help prevent cancer. When actress Angelina Jolie found out that she inherited the BRCA1 gene that places women at a high risk of ovarian and breast cancer, she decided to undergo a double mastectomy. 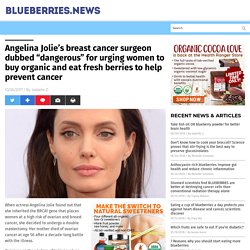 Her mother died of ovarian cancer at age 56 after a decade-long battle with the illness. Opinions on the wisdom of taking such an extreme step are divided, but one thing that should not be controversial is her doctor’s advice to other women who want to avoid breast cancer. Board-certified breast surgeon Dr. Kristi Funk, who performed Jolie’s double mastectomy four years ago, has unexpectedly found herself coming under fire for tips she gave women on Good Morning America. What did Dr. Chemotherapy Is Losing Its Luster. By Dr. 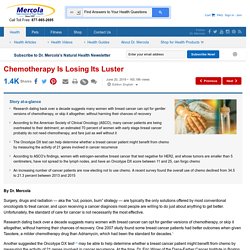 Mercola Surgery, drugs and radiation — aka the “cut, poison, burn” strategy — are typically the only solutions offered by most conventional oncologists to treat cancer, and upon receiving a cancer diagnosis most people are willing to do just about anything to get better. Unfortunately, the standard of care for cancer is not necessarily the most effective. Stunned scientists find BLUEBERRIES are better at destroying cancer cells than conventional radiation therapy alone. So…It Turns Out You Can Kill Cancer After All. We're creating viewer supported news. 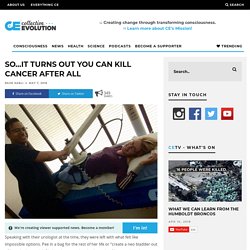 Become a member! Speaking with their urologist at the time, they were left with what felt like impossible options. Pee in a bag for the rest of her life or “create a neo bladder out of intestinal material. Oh, but there are drawbacks to that,” he mentioned. Jeff Witzeman shared his and his wife’s (Kerry) incredible healing journey with cancer treatment. Feeling dejected, they went home to absorb what they just heard and understand the reality of their situation. Stage-3 myeloma cancer completely ELIMINATED with a turmeric supplement – British Medical Journal. Most cancer drugs make it to the market without any proof they’re safe or effective. ‘Oops… It Wasn’t Cancer After All,’ Admits The National Cancer Institute/JAMA.

Support Advances in Managing Cancer as a Metabolic Disease. By Dr. 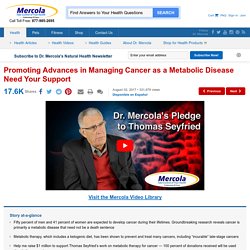 Mercola Cancer has become Americans' No. 1 health concern. It is easy to understand why.

Angelina Jolie’s breast cancer surgeon dubbed “dangerous” for urging women to buy organic and eat fresh berries to help prevent cancer – NaturalNews.com. (Natural News) When actress Angelina Jolie found out that she inherited the BRCA1 gene that places women at a high risk of ovarian and breast cancer, she decided to undergo a double mastectomy. 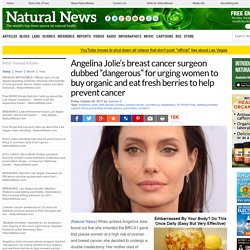 Her mother died of ovarian cancer at age 56 after a decade-long battle with the illness. Opinions on the wisdom of taking such an extreme step are divided, but one thing that should not be controversial is her doctor’s advice to other women who want to avoid breast cancer. Board-certified breast surgeon Dr. Kristi Funk, who performed Jolie’s double mastectomy four years ago, has unexpectedly found herself coming under fire for tips she gave women on Good Morning America. Oncologists Don't Like Baking Soda Cancer Treatment Because It's Too Effective and Too Cheap. Have you heard about using baking soda as a treatment for cancer? 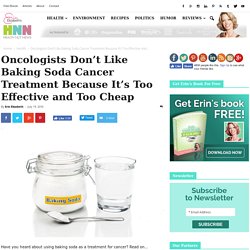 Read on… There are doctors, AND patients, who have first-hand knowledge that even the most aggressive cancers- even those which have metastasized- can be reversed by using the baking soda cancer treatment. While chemotherapy is toxic to all cells, it represents the only measure that oncologists employ (because doctors and pharmaceutical companies make money from it- not because it’s effective, decreases morbidity, mortality or diminishes any specific cancer rates) in their practice to almost all cancer patients. But sadly, chemotherapy boosts cancer growth and long-term mortality rates and oncologists know it. There are other methods, though. Which kills you faster – chemotherapy or cancer? – NaturalNews.com. (Natural News) Science is now proving that chemotherapy actually causes cancer to spread throughout the body. 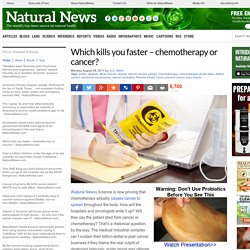 How will the hospitals and oncologists write it up? Will they say the patient died from cancer or chemotherapy? That’s a rhetorical question, by the way. The medical industrial complex can’t sustain their billion-dollar-a-year cancer business if they blame the real culprit of destroyed immunity, acidic blood and ultimate cell mutation that takes over the body of the patient. According to the Pharma Death Clock, there have been over 17 million U.S. deaths caused by chemotherapy since 2001, yet under 11 million deaths were caused by cancer itself, so what’s wrong with this picture? Consider that the combination of already having cancer and getting dosed with chemotherapy and radiation after stressful surgeries compounds the problem. Vitamin C found to halt blood cancer when administered in high doses… so why won’t the cancer industry use it? – NaturalNews.com. (Natural News) Early-stage trials have shown that high doses of vitamin C can help to fight blood cancer. 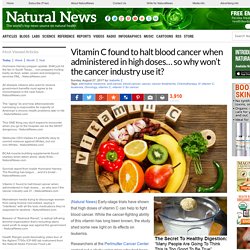 While the cancer-fighting ability of this vitamin has long been known, the study shed some new light on its effects on leukemia. Researchers at the Perlmutter Cancer Center carried out a study using mice who had been engineered to be deficient in the TET2 enzyme, which is believed to protect against blood cancer and heart disease. They found that injecting high doses of vitamin C could stop leukemia cancer stem cells that had been implanted from humans into the mice from growing. Essentially, the researchers think that the vitamin tells faulty stem cells found in our bone marrow to die. Mainstream media finally starting to ask why TURMERIC isn’t being promoted as a safe, affordable treatment for CANCER – NaturalNews.com. (Natural News) A common kitchen staple has saved the life of a 57-old woman who had been battling blood cancer for five years. 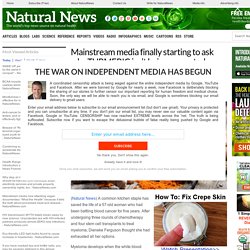 After undergoing three rounds of chemotherapy and four stem cell transplants to treat myeloma, Dieneke Ferguson thought she had exhausted all her options. Myeloma develops when the white blood cells produced in the bone marrow start to multiply uncontrollably. When this happens, the body stops producing the normal antibodies needed to fight infection, resulting in bone damage, intense pain, fatigue, and nerve damage. Usually, people who develop the disease do not live beyond five years of diagnosis. Speaking to the Daily Mail Online, Ferguson, who lives in North London and runs Hidden Art, a not-for-profit business helping artists market their work, explained that she had been on all sorts of toxic drugs with terrifying side-effects. Chemotherapy causes cancer, science study finds, confirming Big Pharma’s “repeat business” model for cancer patients – NaturalNews.com.

(Natural News) Imagine if there was a natural remedy everybody was using to treat cancer, but then the FDA and CDC found out it actually caused more cancers to develop in the body, and scientific studies proved it. 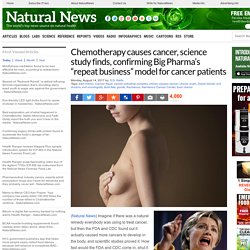 How fast would the FDA and CDC come in, shut it all down and make the treatment illegal? The news would be plastered all over mass media and everyone would know. There would be lawsuits for millions, if not billions of dollars, levied against the creators of the treatment. We would never hear the end of it. American Cancer Society website literally suggests recipes that CAUSE cancer while the rest of us are fighting to prevent and cure it – NaturalNews.com.

(Natural News) The number one fuel that creates cancer cells and causes them to spread throughout the human body is food that contains chemicals. Processed sugar, insecticides, herbicides, nitrates in meat, hormones in meat and dairy, artificial sweeteners and genetically modified “anything” just begins the laundry list of American foods that are manufactured, dosed and processed with carcinogenic, cell-mutating chemicals that cause the uncontrolled multiplication of deadly cells in the human body. Consuming these non-natural concoctions is literally a “recipe for disaster,” and the very organizations that claim they’re searching “for the cure” are recommending we eat more chemicals, even while we are battling cancer. If that’s not the most insidious scheme on planet earth, then we all better wake up fast and smell the toxic coffee that’s brewing right under our noses.

Natural Cancer Treatment - 11 Highlights with LINER. By Dr. Mercola Imagine a commercial plane crashed and there were some fatalities involved. You can be sure that would make the headline of every major newspaper. Monsanto Mayhem: Will the EPA Side With Industry? By Dr. Mercola In March 2015, the International Agency for Research on Cancer (IARC), which is the research arm of the World Health Organization (WHO), determined glyphosate, the active ingredient in Monsanto's Roundup herbicide, to be a "probable carcinogen" (Class 2A). This determination was based on evidence showing the popular weed killer can cause non-Hodgkin's lymphoma and lung cancer in humans, along with "convincing evidence" it can also cause cancer in animals.

Monsanto has maintained that the classification as a carcinogen is wrong and continues to tout glyphosate (and Roundup) as one of the safest pesticides on the planet. Berkeley Doctor Claims That People Die From Chemotherapy NOT Cancer. Sadly, recent stats say that around 1 in 2 men and 1 in 3 women will develop cancer in their lifetimes. This truth is even tougher to swallow when you realize the way we “treat” the disease is not only ineffective but makes the symptoms of the disease worse.

In fact, according to Berkeley doctor Hardin B Jones, a former professor of medical physics and physiology at the University of California, Berkeley, CHEMO DOESN’T WORK. In fact, he says its a sham. In his studies over the last 25 years he’s come to the conclusion that chemotherapy does more harm than good. And this realization has prompted Dr. Chemo child abuse: Connecticut FORCED 17-year old girl to have chemotherapy without her consent... now her cancer is back. The pink parade facade: Susan Komen Foundation not telling the truth about breast cancer.