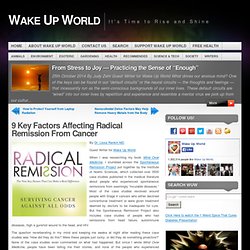 Lissa Rankin MD Guest Writer for Wake Up World When I was researching my book Mind Over Medicine, I stumbled across the Spontaneous Remission Project put together by the Institute of Noetic Sciences, which collected over 3500 case studies published in the medical literature about people who experienced spontaneous remissions from seemingly “incurable diseases.” Most of the case studies revolved around people with Stage 4 cancers who either declined conventional treatment or were given treatment deemed by doctors to be inadequate for cure. But the Spontaneous Remission Project also includes case studies of people who had remissions from heart failure, autoimmune diseases, high a gunshot wound to the head, and HIV. Can cancer be stopped in its tracks? Even cured? The cancer documentary event of the year has now arrived - NaturalNews.com. Thursday, May 22, 2014by Mike Adams, the Health RangerTags: cancer documentary, prevention, natural cures (NaturalNews) The most important cancer documentary series ever produced -- what I'm calling the "Healing event of the year! 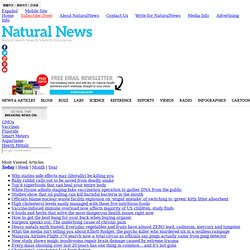 " -- has now arrived. It's called The Truth About Cancer and it's a professionally-produced video documentary series that launches in just a few days, on May 26th. The Truth About Cancer features video interviews with 29 amazing experts, including people I consider to be the very top cancer experts in the world today. In this series, you'll hear from people like: Dr. ... and yes, the Health Ranger is interviewed too! Healing Illness - A Natural Anti-Cancer Protocol. (NaturalNews) Western medicine treats the body as a collection of parts instead of as a synergistic organism. 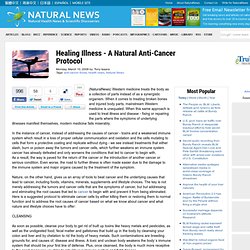 When it comes to treating broken bones and injured body parts, mainstream Western medicine is unequaled. When this same approach is used to treat illness and disease - fixing or repairing the parts where the symptoms of underlying illnesses manifest themselves, modern medicine fails miserably. Nature, on the other hand, gives us an array of tools to beat cancer and the underlying causes that lead to cancer, including foods, vitamins, minerals, supplements and lifestyle choices. Le gaulois déchainé Cancer : Laetrile (Amygdaline, Vitamine B17) découverte et fonctionalité. 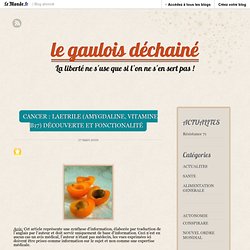 PROTOCEL – HOW TO USE IT AND WHAT IT DOES. By Lawrence Wilson, MD © April 2014, The Center For Development. 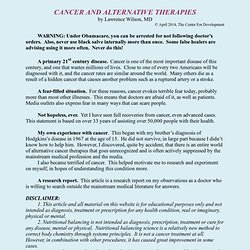 Dr Richard Schulze - Creating Powerful Health Naturally 1of2. Latest Research. New research is showing that two of the most important macro supplement nutrient complexes that can be placed in our anti-aging arsenal are antioxidants and methylation facilitators. 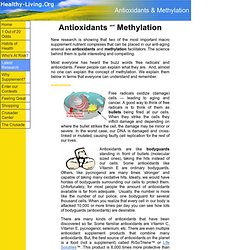 The science behind them is quite interesting and compelling. Most everyone has heard the buzz words ‘free radicals’ and antioxidants. Fewer people can explain what they are. And, almost no one can explain the concept of methylation. We explain them below in terms that everyone can understand and remember. Antioxidants Free radicals oxidize (damage) cells — leading to aging and cancer. Antioxidants are like bodyguards standing in front of bullets (molecular sized ones), taking the hits instead of our cells.

The association of Streptococcus bovis/gallolyticus with colorectal tumors: The nature and the underlying mechanisms of its etiological role. The Forgotten Clue To The Bacterial Cause Of Cancer. Virginia Livingston - Cancer Quack Or Medical Genius? Grandfather with 'incurable' cancer is given the all-clear after swapping red meat and dairy products for 10 fruit and veg a day. Doctors told Allan Taylor, 78, in April that his cancer couldn't be treated and had spread from his colon to his small intestineIn August the retired oil rig engineer from Middlesbrough got another letter - to say he was cancer-freeHe puts the change down to his new diet, which he adopted after looking up 'colon cancer cures' on the internet By Rob Preece Published: 14:30 GMT, 16 September 2012 | Updated: 08:26 GMT, 17 September 2012. 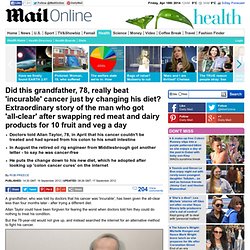 Aspartame Dangers and Side Effects. Food PH Chart - Most Alkaline and Acidic Foods. Balanced body chemistry is of utmost importance for the maintenance of health and correction of disease. 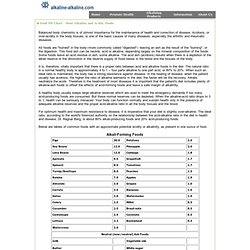 Acidosis, or over-acidity in the body tissues, is one of the basic causes of many diseases, especially the arthritic and rheumatic diseases. All foods are "burned" in the body--more commonly called "digested"-- leaving an ash as the result of the "burning", or the digestion. This food ash can be neutral, acid or alkaline, depending largely on the mineral composition of the foods. Some foods leave an acid residue or ash, some alkaline. The Hidden Story of Cancer – a synopsis « Cancerfighter’s Weblog. Foods That Prevent Cancer. The short answer to this question is -- drum roll, please -- yes. 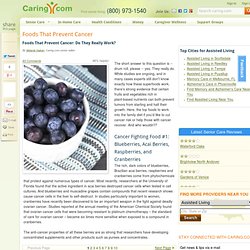 They really do. While studies are ongoing, and in many cases experts still don't know exactly how these superfoods work, there's strong evidence that certain fruits and vegetables rich in plant-based nutrients can both prevent tumors from starting and halt their growth.