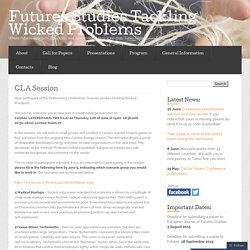 In the session, we will work in small groups and conduct a Causal Layered Analysis game on four scenarios from the ongoing Neo-Carbon Energy project. The scenarios depict a world of renewable distributed energy and peer-to-peer organisations in the year 2050. The developer of the method, Professor Sohail Inayatullah, will give an introductory talk, moderate the groups and comment on the results. The number of participants is limited. 1) Radical Startups – Society is business-oriented, but economy is driven by a multitude of small-scale startups known for their “radical” values and approaches. 2) Value-Driven Techemoths – Peer-to-peer approaches are common, but they are practiced within large corporations.

Sohail Inayatullah. Post-structuralism. Post-structuralism is a label formulated by American academics to denote the heterogeneous works of a series of mid-20th-century French and continental philosophers and critical theorists who came to international prominence in the 1960s and '70s.[1][2][3] A major theme of post-structuralism is instability in the human sciences, due to the complexity of humans themselves and the impossibility of fully escaping structures in order that we might study them. 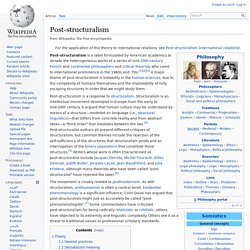 Post-structuralism is a response to structuralism. Structuralism is an intellectual movement developed in Europe from the early to mid-20th century. Theory[edit] General practices[edit] The author's intended meaning is secondary to the meaning that the reader perceives. Causal Layered Analysis: Sohail Inayatullah at TEDxNoosa. 4 levels of CLA. Sohail Inayatullah Predicts the future with ESB. Creating Preferred Futures with Strategic Foresight. Sohail Inayatullah, Introduction to Futures thinking. Futuresposter sm. Future triangle. Patterns. 7 Questions. Future landscape. Scenarios. The futures triangle. This is the second post in a series sharing my ‘toolbox‘ of processes for facilitating change. 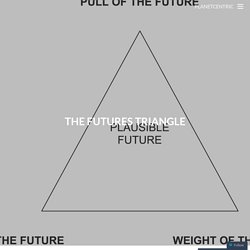 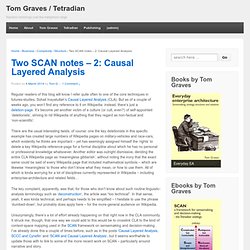 But as of a couple of weeks ago, you won’t find any reference to it on Wikipedia: instead, there’s just a deletion-page. It’s become yet another victim of a culture (or cult, even?) Of self-appointed ‘deletionists’, striving to rid Wikipedia of anything that they regard as non-factual and ‘non-scientific’. There are the usual interesting twists, of course: one the key deletionists in this specific example has created large numbers of Wikipedia pages on military-vehicles and race-cars, which evidently he thinks are important – yet has seemingly assigned himself the ‘rights’ to delete a key Wikipedia reference-page for a formal discipline about which he has no personal or professional knowledge whatsoever.

Unsurprisingly, there’s a lot of effort already happening on that right now in the CLA community. SCAN and Causal Layered Analysis. Tamkang University - Academia.edu. While the roots of neohumanism are certainly based on the spiritual practice of Tantra (from the broader Indic episteme), neohumanism and neohumanistic education is situated best as a transcivilizational global pedagogy. 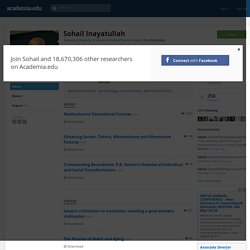 Neohumanism has both a linear dimension, continuing the progressive evolution of rights that the Enlightenment has given us, and a cyclical dimension, embracing our ancient spiritual traditions, creating thus a turn of the spiral, transcending and including past and present. Neohumanism thus aims to relocate the self from ego (and the pursuit of individual maximisation), from family (and the pride of genealogy), from geo-sentiments (attachments to land and nation), from socio-sentiments (attachments to class, race and religious community), from humanism (the human being as the centre of the universe) to neohumanism (love and devotion for all, inanimate and animate, beings of the universe). 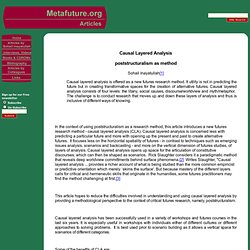 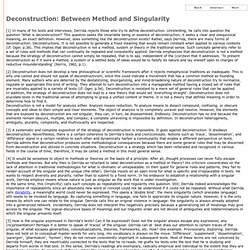 Unrelenting, he calls into question the question 'What is deconstruction? ' This question seeks the invariable being or essence of deconstruction; it seeks a clear and unequivocal meaning, an exact definition. However, does something like the deconstruction exists? Rather, says Derrida, there are many forms of deconstruction. . [2] Deconstruction does not develop a new philosophical or scientific framework after it rejects metaphysical traditions as inadequate. Deconstruction. Deconstruction (French: déconstruction) is a form of philosophical and literary analysis derived principally from Jacques Derrida's 1967 work Of Grammatology.[1] In the 1980s it designated more loosely a range of theoretical enterprises in diverse areas of the humanities and social sciences, including—in addition to philosophy and literature—law[2][3][4] anthropology,[5] historiography,[6] linguistics,[7] sociolinguistics,[8] psychoanalysis, political theory, feminism, gay and lesbian studies. 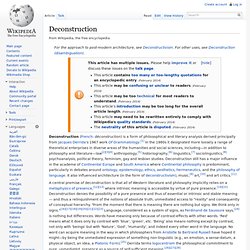 Deconstruction still has a major influence in the academe of Continental Europe and South America where Continental philosophy is predominant, particularly in debates around ontology, epistemology, ethics, aesthetics, hermeneutics, and the philosophy of language. It also influenced architecture (in the form of deconstructivism), music,[9] art,[10] and art critics.[11] Etymology[edit] On deconstruction[edit] Derrida's approach to literary criticism[edit] Basic philosophical concerns[edit] 1. 2. 3.