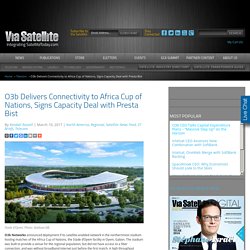 Photo: Stadium DB. O3b Networks announced deployment if its satellite-enabled network in the northernmost stadium hosting matches of the Africa Cup of Nations, the Stade d’Oyem facility in Oyem, Gabon. The stadium was built to provide a venue for the regional population, but did not have access to a fiber connection, and was without broadband internet just before the first match. A high throughput broadband link was necessary for international transmission of the game, and was also required by journalists covering the match. Before the first kickoff, however, event organizers delivered an equal internet experience to other match locations by deploying connectivity from O3b Networks. O3b is a satellite-based global network, but according to the company its satellites are much closer to the Earth than traditional Geostationary Earth Orbit (GEO) satellites, greatly reducing latency, which improves internet performance and the Quality of Experience (QoE) for end users.

Brazil-Africa fiber cable project makes progress. A fiber optic undersea link connecting Angola's capital Luanda to the Brazilian city of Fortaleza is reported to be about 50 percent complete, with operations set to begin later this year. 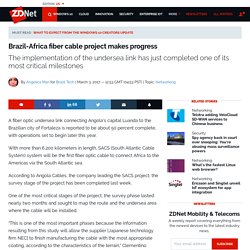 With more than 6,200 kilometers in length, SACS (South Atlantic Cable System) system will be the first fiber optic cable to connect Africa to the Americas via the South Atlantic sea. According to Angola Cables, the company leading the SACS project, the survey stage of the project has been completed last week. One of the most critical stages of the project, the survey phase lasted nearly two months and sought to map the route and the undersea area where the cable will be installed. The information is also crucial to inform the choice of signal repeaters of the cable, as well as in the definition of the power of each of them, Fernando added. The Brazil-Europe cable is currently being built under a joint venture led by Telebrás and Spain's IslaLink Submarine Cables. 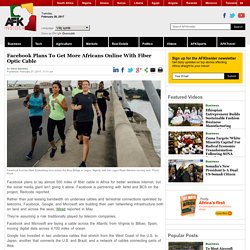 Photo: Fin24 Facebook plans to lay almost 500 miles of fiber cable in Africa for better wireless internet, but the social media giant isn’t going it alone. Facebook is partnering with Airtel and BCS on the project, Redcode reported. Rather than just leasing bandwidth on undersea cables and terrestrial connections operated by telecoms, Facebook, Google, and Microsoft are building their own networking infrastructure both on land and across the seas, Wired reported in May. They’re assuming a role traditionally played by telecom companies. Facebook and Microsoft are laying a cable across the Atlantic from Virginia to Bilbao, Spain, moving digital data across 4,100 miles of ocean. Google has invested in two undersea cables that stretch from the West Coast of the U.S. to Japan, another that connects the U.S. and Brazil, and a network of cables connecting parts of Asia. Africa: Facebook's Open Cellular GSM Base Station Comes Out of the Shadows and Goes On Sale - a New Way to Address Africa's Remote Areas.

London — One of the first products from Facebook's Telecom Infra Product will shortly see the full light of day: an Open Source, low cost GSM base station designed with remote areas in African countries in mind. 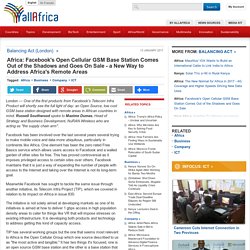 Russell Southwood spoke to Maxime Dumas, Head of Strategy and Business Development, NuRAN Wireless who are acting as "the supply chain arm". Facebook has been involved over the last several years several trying to make mobile voice and data more ubiquitous, particularly in continents like Africa. One element has been the zero rated Free Basics service which allows users access to Facebook and a walled garden of other sites for free. This has proved controversial as it imposes privileged access to certain sites over others. Facebook maintains that it is just a way of expanding the number of people with access to the Internet and taking over the Internet is not its long-term goal. Facebook launches OpenCellular platform. Image copyright Facebook Facebook has launched an open-sourced communications platform, as part of the social network's continuing attempts to bring internet connectivity to underserved parts of the world. 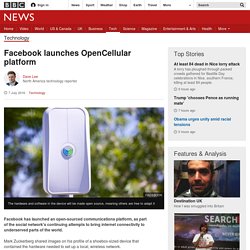 Mark Zuckerberg shared images on his profile of a shoebox-sized device that contained the hardware needed to set up a local, wireless network. "OpenCellular is the next step on our journey to provide better, more affordable connectivity to bring the world closer together," he wrote. But Facebook's efforts in developing countries have been severely criticised over the course of 2016. The site's total user base is now more than 1.6bn. It has developed several technologies, including a lightweight, solar-powered drone that is being engineered and built in the UK. Africa: At&t and Ericsson to Deliver Technologies That Boost the Internet of Things. By Jeanette Oloo. 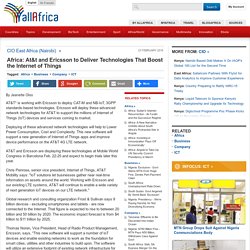 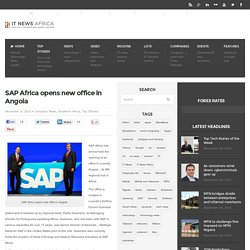 SAP Africa has announced the opening of an office in Luanda, Angola – its fifth regional hub in Africa. The office is located in Luanda’s Edificio Escom business district and is headed up by regional head, Pedro Guerreiro, as Managing Director for Portuguese-speaking Africa. Guerreiro, who has been with SAP in various capacities for over 17 years, was Senior Director of Services – Strategic Sales for SAP in the United States prior to this role. Guerreiro also currently holds the position of Head of Energy and Natural Resource Industries at SAP Africa. SAP’s investment in the largest city in Angola affirms the company’s commitment to strengthening relationships with government, customers and business partners, and expanding operations throughout Portuguese-speaking Africa. Uganda: Google Launches Wifi Network in Kampala.

By Agencies Kampala - Google has launched its first Wi-Fi network in Uganda's capital Kampala, as part of a project to broaden access to affordable high-speed Internet. 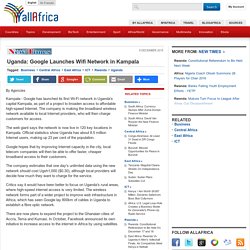 The company is making the broadband wireless network available to local Internet providers, who will then charge customers for access. Yahsat, Hughes Expand Partnership to Serve Africa. PARIS — Satellite fleet operator Yahsat of the United Arab Emirates on Nov. 17 said it was expanding its relationship with broadband hardware and service provider Hughes Network Systems with a multiyear contract for broadband rollout in 18 African nations. 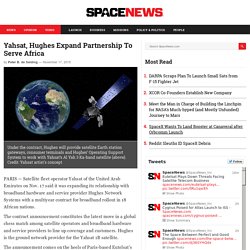 The contract announcement constitutes the latest move in a global chess match among satellite operators and broadband hardware and service providers to line up coverage and customers. Hughes is the ground network provider for the Yahsat 1B satellite. Africa: #Africacom2015 - Project Loon By Google to Bring Connectivity to Rural Parts of the Continent. By Lilian Mutegi Project Loon, the balloon-based floating internet delivery platform, is set to help bring connectivity to hard to reach parts of the continent. 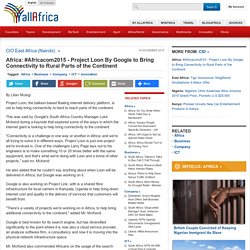 This was said by Google's South Africa Country Manager Luke Mckend during a keynote that explored some of the ways in which the internet giant is looking to help bring connectivity to the continent. "Connectivity is a challenge in one way or another in Africa; and we're all trying to solve it in different ways. Facebook targeting 14 African countries with satellite internet initiative, says Eutelsat CEO - “In Africa, like anywhere else connectivity is a social value,” de Rosen said during an interview at Eutelsat’s Paris headquarters. “It helps people find jobs, it helps people develop their business, it helps people be more educated and it helps people be part of the international, global economy.”

The initiative was announced by Facebook and Eutelsat on Monday. Facebook and other tech giants expand internet access in Africa. Nearly two years ago, Facebook’s chief executive, Mark Zuckerberg, announced an ambitious effort to connect the world’s poorest people to the internet. Zuckerberg’s vision – carried out with partners through an entity called Internet.org – encompasses a range of strategies, including lasers, drones and satellites beaming internet signals down from the sky. But the most concrete manifestation of Internet.org has been a mobile phone app – more precisely, a suite of applike services built inside one big Internet.org app – that Facebook has been trying to persuade phone carriers around the globe to offer free to users. Although the exact mix varies from country to country, the highlight of the app is a stripped-down version of Facebook’s social network and its Messenger instant-messaging service, with other services also included, such as Wikipedia, news, weather reports, government and social services, and local apps created by entrepreneurs in each region.

Google's Android is Digging Deeper into Africa. This week Google (NASDAQ:GOOG) (NASDAQ:GOOGL) announced that its Android One initiative is launching in Africa, with an initial focus on Egypt, Ghana, Ivory Coast, Kenya, Morocco, and Nigeria. That brings the tally of countries with Android One to 16, with the African continent now a big a part of Android One's expansion. The Android One conquestA year ago Google launched Android One in India, in an effort to both expand Android's reach among developing countries and reign in some of the bloatware and highly modified versions of Android currently on the market. With Android One, smartphones run a pure version of Google's mobile operating system, with regular updates to new versions when they're released. The HOT 2. Source: Google. In the African countries, Android One will be released on the Infinix HOT 2.

IBM Develops $2.5bn Super Computer for Kenya. VENTURES AFRICA – Kenya’s eCommerce ecosystem is set to see greater efficiencies as IBM has launched what it has dubbed the ‘most powerful and secure system ever built.’ The z13 mainframe is an impressive demonstration of human ingenuity, technological advancement, and the monumental cost in terms of time and money – five years and a whopping $2.5 billion. Constructed with the burgeoning Kenyan mobile economy in mind, this super computer is the first system able to process 2.5 billion transactions per day. To say that this is extraordinary is an understatement considering that Kenya’s total transactions in the whole of 2014 amounted to 825 million raking in Sh2 trillion ($21.9 billion), a mere 33 percent of what the new super computer can do in a day.

Google's Project Link builds high-speed networks in Africa. Silicon Valley-Backed Start-up, Volo Wants To Bring High-Speed Broadband To ISPs in Africa. With over a billion new Internet users coming online in emerging markets, the demand for online business tools, cloud services and video is getting higher than ever before. That’s why Volo, a new start-up backed by French telco, Orange and Silicon Valley investors wants to be the broadband for billions. Volo, which is expected to launch tomorrow (June 5) is bringing a significantly less expensive way to deliver high-speed broadband Internet to Ugandan ISPs, after several years of fieldwork operating bulletproof networks across the Caribbean, South Pacific, Middle East and Africa.

(Image source: Sean MacEntee/Flickr)Global software provider, Microsoft has announced the launch of new TV white space partnerships and projects on four continents, including Africa It has also partnered with SpectraLink Wireless and Facebook to provide lowcost wireless connectivity to students and faculty at universities in Koforidua, Ghana, the company said. Facebook reveals online education app for Rwanda. A sign with the 'like' symbol stands in front of the Facebook headquarters on February 1, 2012 in Menlo Park, California. Facebook is helping roll out a pilot online education program in Rwanda, under the Internet.org umbrellaThe SocialEDU program, called edX, will be a mobile app integrated into Facebook to provide localized educationAnnouncement comes ahead of Zuckerberg's Mobile World Congress keynote speech Editor's note: Mobile World Congress is the world's largest mobile phone trade show looking at the current state of mobile and where it might go next.

Polycom eyes Africa for video conferencing services. By BiztechAfrica - April 26, 2014, 7:23 a.m. How IBM Is Building Technology Talent In Africa. (By Katharyn White) “The central lesson of that experience is that the talent required for success in the global economy of the 21st century is present and growing in Africa; digital infrastructure in much of the continent is world class; and in fact, because the environment for innovation is so wide open, and because entrepreneurial thinking is so prevalent, Africa is becoming the proving ground for aspects of contemporary commerce, and redefining the lines across and among industries. Intel to invest in African startups to spur app development. Is Google's Project Link the first nail in the African telcos' coffin? Google Fiber Comes to Africa. Innovation for a Continent: IBM Research - Africa Opens A Smarter Planet Blog.