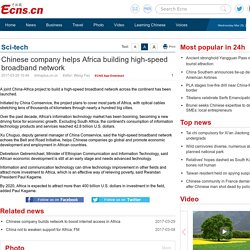 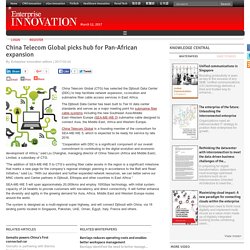 The Djibouti Data Center has been built to Tier III data center standards and serves as a major meeting point for submarine fiber cable systems including the new Southeast Asia-Middle East–Western Europe (SEA-ME-WE 5) submarine cable designed to connect Asia, the Middle East, Africa and Western Europe. China Telecom Global is a founding member of the consortium for SEA-ME-WE 5, which is expected to be ready for service by late 2016. 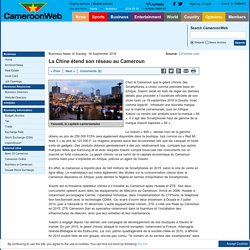 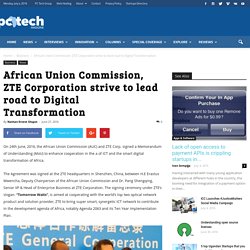 The Agreement was signed at the ZTE headquarters in Shenzhen, China, between H.E Erastus Mwencha, Deputy Chairperson of the African Union Commission and Dr. Pang Shengqing, Senior VP & Head of Enterprise Business at ZTE Corporation. The signing ceremony under ZTE’s slogan: “Tomorrow Waits”, is aimed at cooperating with the world’s top two optical network product and solution provider, ZTE to bring super smart, synergetic ICT network to contribute in the development agenda of Africa, notably Agenda 2063 and its Ten Year Implementation Plan. 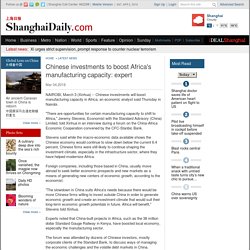 "There are opportunities for certain manufacturing capacity to shift to Africa," Jeremy Stevens, Economist with the Standard Advisory (China) Limited, told Xinhua in an interview during a forum on the China-Africa Economic Cooperation convened by the CFC-Stanbic Bank. Stevens said while the macro-economic data available shows the Chinese economy would continue to slow down below the current 6.4 percent, Chinese firms were still likely to continue shaping the investment climate, especially in the infrastructure sector, where they have helped modernize Africa. China's Mobile Payment Revolution Is Going to Africa. CAPE TOWN, South Africa -- With the launch of Apple Pay in mainland China on Feb. 18, Apple has become the first foreign player to secure a place at the table for China's enormous mobile payment market. 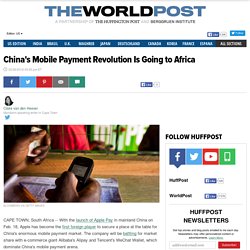 The company will be battling for market share with e-commerce giant Alibaba's Alipay and Tencent's WeChat Wallet, which dominate China's mobile payment arena. By the end of last year, a staggering 358 million Chinese were using mobile phones to purchase goods and services, according to research from the China Internet Network Information Center. Outside of China, financial institutions are eagerly looking for ways to build entire ecosystems around their users, following the success of digital leaders like Tencent and Alibaba, Beijing-based managing director of Accenture Albert Chan told Bloomberg. Chinese Tech Firm, Konka, Opens Shop in Nigeria, Articles. Konka Telecoms Abimbola Akosile A Chinese technology firm, Konka Telecoms of China, has set up shop in Nigeria with a pledge to deepen competition in the mobile phone market and give customers opportunities to experience the cutting edge technology which is associated with its products. 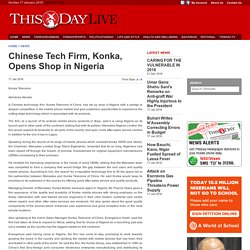 The firm, at a launch of its android mobile phone products in Ikeja, said it is using Nigeria as its launch-pad to other parts of the continent, adding that with its partner, Mansales Nigeria Limited, the firm would expand its tentacles to all parts of the country and open more after-sales service centres in addition to the one it has in Lagos. Speaking during the launch of its range of mobile phones which included Konka W550 and others, the Chairman, Mansales Limited, Engr. 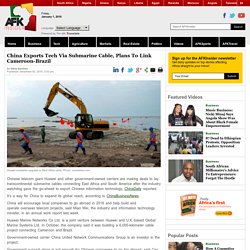 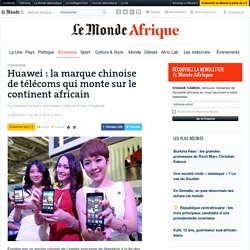 Huawei Marine says it has won a contract to deploy the Cameroon-Brazil Cable System (CBCS), a submarine network that will link Africa and Latin America. 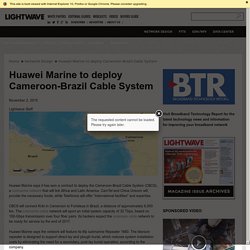 CamTel and China Unicom will provide the necessary funds, while Telefónica will offer "international facilities" and expertise. CBCS will connect Kribi in Cameroon to Fortaleza in Brazil, a distance of approximately 6,000 km. The submarine cable network will sport an initial system capacity of 32 Tbps, based on 100-Gbps transmission over four fiber pairs. Its backers expect the undersea cable network to be ready for service by the end of 2017. Huawei Marine says the network will feature its 6fp submarine Repeater 1660. Cameroon awards $487m Telecoms Contract to Chinese firm. China United Network Communications Corp. (uniCom) and state-run Cameroon Telecommunications (CamTel), signed an agreement Wednesday that will involve deploying a 5,917-kilometer-long undersea cable between Brazil and Cameroon, aimed at expanding the West African nation’s telecommunications capability.

Best practices and international experience of rolling out National Broadband Networks (NBN) and LTE networks were presented by Huawei during workshops at the IAD Summit, in order to provide technological advises to the ICT planning in local African market. “ICT talent is important for the ICT development in Africa. Huawei’s efforts in building a better connected Africa was acknowledged by the government of Zimbabwe. Tags. China Strives to Be on African Minds, and TV Sets. Photo While China imposes strict controls on foreign-produced entertainment at home, it is also eager to see its cultural products embraced abroad. And in Africa, Chinese television shows have become immensely popular — at least according to the Chinese state news media.

This week, People’s Daily, the main newspaper of the Communist Party, reported that Africans have given Chinese television shows a warm reception. It described a Ugandan taxi driver as professing his love for the Chinese romantic comedy “Let’s Get Married” as soon as the writer stepped into his cab. And it quoted a Tanzanian professor as saying that his countrymen wait in front of their television sets in anticipation of a new Chinese program.

“More and more African peoples are gaining an understanding of Chinese society by watching contemporary Chinese television dramas, and becoming interested in China,” the article said. “Probably the two episodes during which the interviewees are not in a U.S. Huawei to build Congo-Gabon network. | Dec. 16, 2014, 4:17 p.m. Image: By BiztechAfrica Huawei to build Congo-Gabon network By Issa Sikiti da Silva, Congo Chinese telecommunication giant Huawei has won the contract to build a fibre optic network that will interconnect the oil-rich Central African nations of Congo Brazzaville and Gabon, a project set to cost about US$26 million. The network will be made up of a single mode fibre with a type G655 along550 km from Congo’s landing station of Matoumbi up to Mbinda via Pointe-Noire, Dolisie, Makabana and Mosendjo. The network will be armed with the OTN and WDM technology, and its construction is set to begin as early as next week, precisely on 22 December 2014.

If everything goes according to plan, the project, which forms part of the Central African Backbone (CAB), will last about one year and four months. Many Chinese companies have won mega contracts worth billions of billions of US dollars in the past decade. SES Enables Chinese StarTimes to Expand TV Reach in Africa. China Wins Satellite Contract In Africa. Huawei 4 Afrika, le smartphone qui doit conquérir l'Afrique. France Telecom, Baidu team up in Africa. Chinese search engine Baidu will collaborate with France Telecom's Orange on an Android web browser for Africa and the Middle East. Currently, around 80 million African people use Orange and from now on the search browser will be on France Telecom's smartphones offered in the continent.