Egypt's 4G licence is incoming. The launch of 4G licences in Egypt will help boost low user revenue for telecom companies and improve service quality, which will be a boon for businesses. 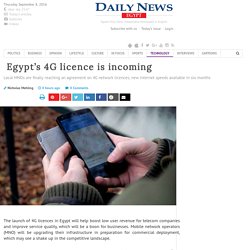 Mobile network operators (MNO) will be upgrading their infrastructure in preparation for commercial deployment, which may see a shake up in the competitive landscape. Four licences are currently being offered with Telecom Egypt (TE), the publically-owned fixed line operator, having acquired the first one on 31 August for EGP 7.06m ($796.5m). The 15-year licence can be extended for another five years for an addition EGP 2bn. TE is due to begin providing 4G mobile services within six months. Untitled. Telecom Egypt set to receive 4G mobile license next year: minister - Business Insider.

Egypt's broadband market worth LE310 bn by 2030. The Egyptian government estimates that the productivity gain to 2030 driven by an unconstrained mobile broadband market is worth around LE310 billion in net present value, according to a report issued by GSM Association (GSMA) on Saturday. 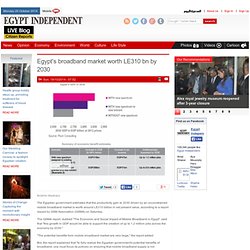 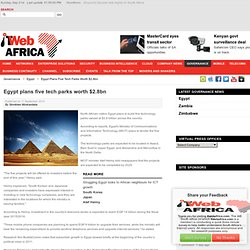 014 Appendix 6.pdf. Ismaillia Technology Valley project - Egypt - Confederation of Industry of the Czech Republic. In the light of the interest of the Egyptian government to promote mega projects among its vital economic and industrial partners, the Egyptian government started campaining for the Ismaillia Technology Valley project on an international level. 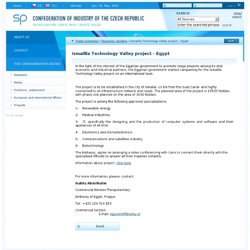 The project is to be established in the City of Ismailia -10 km from the Suez Canal- and highly connected to an infrastructure network and roads. The planned area of the project is 16500 feddan, with phase one planned on the area of 3030 feddan. The project is aiming the following approved specializations: 1- Renewable energy. 2- Medical industries. 3- IT, specifically the designing and the production of computer systems and software and their appliances of all kind. ‫مشروع وادى التكنولوجيا الذي سيجعل مصر كسنغافورة‬‎ Drop in mobile phone users. Recent statistics released by the Ministry of Communications and Information Technology showed that the amount of users registered on Egypt’s local service provider networks decreased by 600,000 in January, from 96.7 million to 96.1 million. 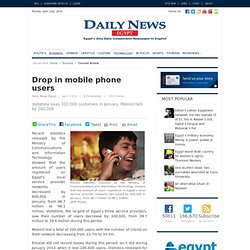 (AFP Photo) Recent statistics released by the Ministry of Communications and Information Technology showed that the amount of users registered on Egypt’s local service provider networks decreased by 600,000 in January, from 96.7 million to 96.1 million. Vodafone, the largest of Egypt’s three service providers, saw their number of users decrease by 300,000, from 39.7 million to 39.4 million during this period. YouTube Partner Programme expands to Egypt. The YouTube Partner Programme was previously used by some Egyptian productions such as Bassem Youssef’s “ElBernameg” (Photo Courtesy of Bassem Youssef’s official Facebook page) YouTube has announced the expansion of its Partner Programme to include Egypt, Saudi Arabia and the United Arab Emirates (UAE) in a press conference on Sunday Users in these countries will now be able to generate revenue depending on the number of views their uploaded videos receive. 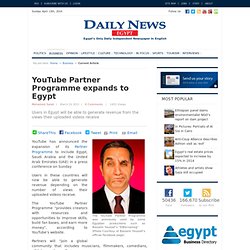 The YouTube Partner Programme “provides creators with resources and opportunities to improve skills, build fan bases, and earn more money”, according to YouTube’s website. Partners will “join a global community that includes musicians, filmmakers, comedians, athletes, and more”. Ericsson ranks Cairo among top cities for ICT-Driven benefit creation. The report lists some of the positive effects that ICT has on innovation and entrepreneurship. Firstly, ICT leads to an increased number of entrepreneurial opportunities. For example, it enables new product innovations such as music and video streaming, e-commerce and cloud services. Secondly, ICT improves access to markets - for example, by enabling entrepreneurs and specialized niche firms to reach larger geographical markets.

Thirdly, ICT reduces the cost of transactions between firms - for example, by minimizing the need to be located geographically close to suppliers, partners and customers. "This report builds on our previous Networked Society City Index reports to examine how ICT can benefit a city and its citizens from an economic, social and environmental perspective," said Anders Lindblad, President, Ericsson Region Middle East and North Africa. Zeitgeist 2012 – Google. 2012 was a year of big moments, from global games to historical elections and everything in between. With this site, we've analyzed over one trillion queries to showcase what the world searched for.

How We Did This We studied an aggregation of over one trillion searches (or queries) that people typed into Google Search this year. We used data from multiple sources, including Google Trends and internal data tools. Jumia plans to take Egypt's e-commerce by storm. Co-Founder of online shop Jumia Egypt Sherif Makhlouf: “We have what it takes to make it in Egypt.” Being the latest e-commerce project in Egypt, Jumia is one of Rocket Internet’s successful business models, which the German online investment giant implemented in 40 emerging markets until now.

In about 3 months, Jumia Egypt shall prove itself as the top e-commerce project in the country, after it has already received an investment by J.P. Morgan Asset Management. The online store sells everything, from technology over fashion items and offers two payment methods: online credit card payment or on delivery. Egyptian economy gets EGP15.6 billion off the internet. Boston Consulting Group and Google launched a report on how the internet affects the Egyptian economy. Google and The Boston Consulting Group (BCG) presented a new study entitled “Egypt at a Crossroads: How the Internet is Transforming Egypt’s Economy”. The independent report was prepared by The Boston Consulting Group after being commissioned by Google in an attempt to describe and quantify the way the Internet is affecting the Egyptian economy. The report highlights the benefits and key success factors for Egypt’s future economic growth. Combined ITO-BPO Value Prop January 2012 - Analysts Visit.pdf (application/pdf Object) 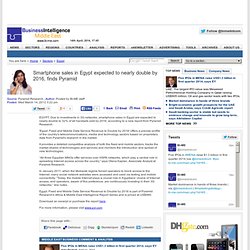 Due to investments in 3G networks, smartphone sales in Egypt are expected to nearly double to 32% of all handsets sold by 2016, according to a new report from Pyramid Research.