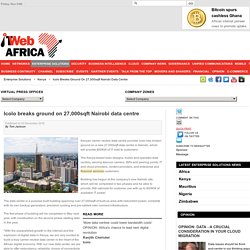 The Kenya-based Icolo designs, builds and operates data centres, serving telecom carriers, ISPs and peering points, IT and cloud providers, content providers, and enterprise and financial services customers. Building has begun at the company's new Nairobi site, which will be completed in two phases and be able to provide 268 cabinets for customer use with up to 800KW of available IT power. The data centre is a purpose-built building spanning over 27,000sqft of built-up area with redundant power, complete with its own backup generators, precision cooling and pre-cabled inter connect infrastructure. Nairobi to host Africa's 1st roaming exchange hub to lower international voice, video costs. Kenya: Chinese Firm Drops Pay TV Prices to Better Serve Kenyans.

Nairobi — Chinese telecom company StarTimes on Tuesday announced the alignment of its top satellite and terrestrial bouquets that will see a 40 percent and 29 percent drop in the cost of the monthly subscription for the two bouquets. 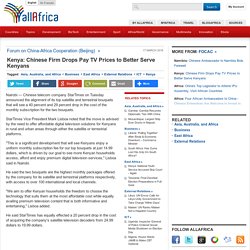 StarTimes Vice President Mark Lisboa noted that the move is advised by the need to offer affordable digital television solutions for Kenyans in rural and urban areas through either the satellite or terrestrial platforms. "This is a significant development that will see Kenyans enjoy a uniform monthly subscription fee for our top bouquets at just 14.99 dollars, which is driven by our goal to see more Kenyan households access, afford and enjoy premium digital television services," Lisboa said in Nairobi. He said the two bouquets are the highest monthly packages offered by the company for its satellite and terrestrial platforms respectively, with access to over 100 international and local channels. 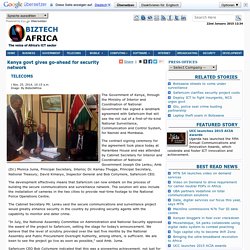 Digital switchover signals growth for Kenya, says GSMA. Tom Phillips, Chief Regulatory Officer, GSMA, offered the following statement regarding confirmation of the schedule for migrating from analogue to digital terrestrial television in Kenya: The GSMA congratulates the Government of Kenya and the Communications Authority of Kenya on finalising the schedule for the country's much-anticipated digital switchover1. 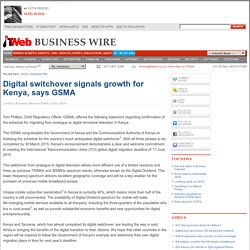 With all three phases to be completed by 30 March 2015, Kenya's announcement demonstrates a clear and welcome commitment to meeting the International Telecommunication Union (ITU) global digital migration deadline of 17 June 2015. The switchover from analogue to digital television allows more efficient use of a limited resource and frees up precious 700MHz and 800MHz spectrum bands, otherwise known as the Digital Dividend.

This lower frequency spectrum delivers excellent geographic coverage and will be a key enabler for the provision of universal mobile broadband access. Business - Kenya ranked most connected economy in Africa. BY Frankline Sunday Updated Wednesday, November 26th 2014 at 00:00 GMT +3 Kenya is the most regionally integrated economy in Africa, according to the second edition of the Visa Africa Integration Index. 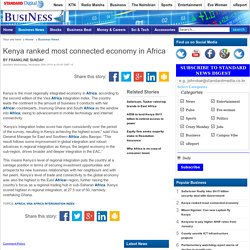 The country leads the continent in the amount of business it conducts with her African counterparts, trouncing Ghana and South Africa as the window into Africa; owing to advancement in mobile technology and Internet connectivity. Kenya launches phase 2 of national fibre project. | Sept. 30, 2014, 8:46 a.m. 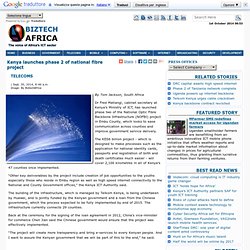 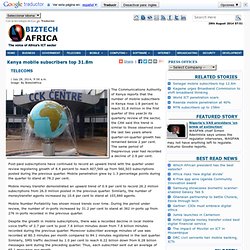 Image: By BiztechAfrica The Communications Authority of Kenya reports that the number of mobile subscribers in Kenya rose 1.8 percent to reach 31.8 million in the first quarter of this year.In its quarterly review of the sector, the CAK said this trend is similar to those observed over the last two years where quarter-on-quarter growth has remained below 2 per cent. The same period of theprevious year had recorded a decline of 2.9 per cent. How a $7 USB is bringing personal computing to Kenya’s poor. Parent Category: Mobile Published on 15 May 2014. 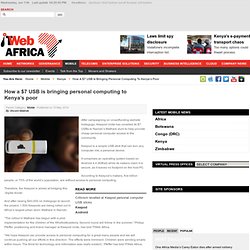 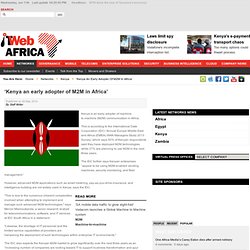 Infographic: Kenya Cellular Mobile Services (Quarter 2) Kenya’s phone use key driver of Africa trade - Business_News. By JOSHUA MASINDE jmasinde@ke.nationmedia.com Kenya’s use of mobile phone services has been cited as among the key pillars of trade in Africa. 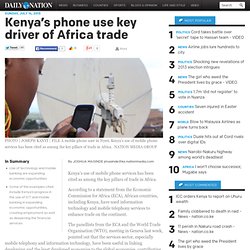 According to a statement from the Economic Commission for Africa (ECA), African countries, including Kenya, have used information technology and mobile telephony services to enhance trade on the continent. Kenya a telecommunications powerhouse - report. Pyramid Research has described the Kenyan telecommunications sector as a powerhouse in Sub-Saharan Africa, based on network expansion and expected revenues over the next five years. “The Kenyan telecommunications market is one of the most dynamic in Sub-Saharan Africa. With four fiercely competing operators (Safaricom, Airtel Kenya, Orange Kenya and Yu), the successful mobile money applications led by M-Pesa and the imminent deployment of LTE in 2013, Kenya is a critical region market for investors, operators and vendors,” the report indicates.

Rural Kenyans to benefit from Indigo Telecom’s white-space tech. Rural Kenyans will receive broadband Internet through new white-space technology being rolled out by Indigo Telecom, in the world’s first commercial launch of the technology. HumanIPO reported last week Indigo Telecom was developing a solar-powered wireless broadband network taking advantage of the new technology. Speaking to HumanIPO, Peter Henderson, Indigo Telecom’s chief executive officer, explained how the technology is set to connect the expanses of Africa and change the lives of millions. “The most difficult challenges to providing internet connection in Africa are the lack of infrastructure and the distances,” said Henderson.

Brits can now beam money to Kenya as Barclays Pingit app expands. IBM buys Kenexa for $1.3 billion, eyes social HR software, services. IBM on Monday said it will buy Kenexa, which provides recruiting and talent management software and services, for $46 a share, or $1.3 billion. According to IBM, Kenexa will allow it to combine people, processes and social analytics. Kenexa has more than 8,900 customers across multiple verticals. M-Pesa users get 24-hour access to cash