Rwanda: Close to 9 Million Rwandans Own Mobile Phones, RURA Dec. Report. The number of Rwandans owning a mobile phone has risen, hitting close to 80 per cent in December 2016, according to the Rwanda Utilities Regulatory Authority (RURA) monthly subscriber report. 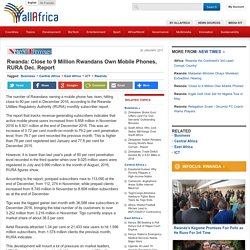 The report that tracks revenue-generating subscribers indicates that active mobile phone users increased from 8.858 million in November 2016 to 8.921 million at the end of December 2016. This was an increase of 0.72 per cent month-on-month to 79.2 per cent penetration level, from 78.7 per cent recorded the previous month. This is higher than 78 per cent registered last January and 77.8 per cent for December 2015.

However, it is lower than last year's peak of 80 per cent penetration level recorded in the third quarter when over 9.025 million users were registered in July and 9.990 million in the month of August, 2016, RURA figures show. Airtel Rwanda attracted 1.34 per cent or 21,433 new users to hit 1.596 million subscribers, from 1.574 million clients the previous month, RURA indicates. Free broadband access on the streets of Rwanda's capital. Rwanda: How U.S Firm Plans to Extend Wireless Connectivity Across Rural Rwanda. Rwanda is right, let’s give everyone free internet. A studY conducted by a British food company and published by The Telegram sometime back listed slow Internet at number nine among the top 100 most annoying things, and rightfully so. 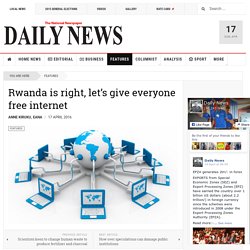 A slow Internet connection or none at all in this day and age is not just annoying, but costly and time wasting. But the era of slow Internet connectivity in East Africa is about to come to an end if regional leaders embrace the initiative of Liquid Telecom, a leading independent data, voice and IP provider in Eastern, Central and Southern Africa. The company is embarking on a project to build a new submarine cable infrastructure that will provide a costeffective and reliable link for landlocked, Southern, Central and East African countries to the Internet and to the world. The company says it wants to plant a cable that will run along the east coast of Africa and into the Red Sea to Europe, which is a less congested route.

Start-up TIC : le Rwanda crée un fonds de 100 millions de dollars. Rwanda now eyes One Digital ID. Rwanda targets 70 percent internet access by 2017 - Why Rwanda can provide the cheapest internet in Africa. VENTURES AFRICA – At the recently concluded Mobile World Congress in Barcelona, Rwanda was ranked the African country with the most affordable internet by the Alliance for Affordable Internet (A4AI), This, however, raised eyebrows over how a country with just 12 million people will beat economic powerhouses like Nigeria, Morocco, and Kenya, all of which have populations that are double or more Rwanda’s. 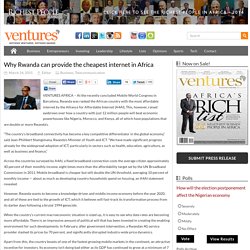 “The country’s broadband connectivity has become a key competitive differentiator in the global economy,” said Jean-Philibert Nsengimana, Rwanda’s Minister of Youth and ICT. “We have made significant progress already for the widespread adoption of ICT, particularly in sectors such as health, education, agriculture, as well as business and finance,” Across the countries surveyed by A4AI, a fixed broadband connection costs the average citizen approximately 40 percent of their monthly income, eight times more than the affordability target set by the UN Broadband Commission in 2011. Rwanda: 4G-Service Provider Slashes Prices By Almost 70 Per Cent. By Ben Gasore Rwandans will now be able to access affordable high speed internet, commonly known as Fourth Generation Long Term Evolution or 4G LTE, after a local vendor slashed prices by almost 70 per cent. 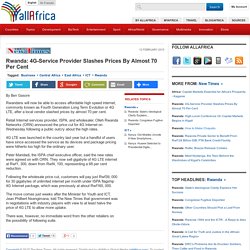 ICT’s contribution to Rwanda’s GDP in 2014 - Statistics show that the sector attracted about 45 per cent of all foreign direct investments in the country and contributed 3 per cent of the country’s Gross Domestic Product (GDP) in the last quarter of the year and is projected to contribute about 4 per cent in the coming year. 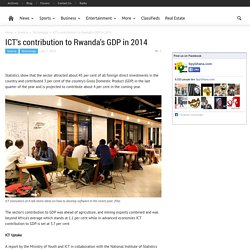 Rwanda Could Be The Next Silicon Valley: But it Needs Youth to Help it Get There  It only takes one glance around the room to see the role technology plays in Rwandan lives.

Last November I was in Kigali for the Transform Africa Summit. Looking out at the crowd from the panelists' stage, I saw a sea of iPads and smartphones staring back at me. It was a truly connected room. Startups. MTN To Bridge Digital Divide.TechMoran. Facebook will use Nokia phones to bring online classes to Rwanda. Today, Facebook announced a new initiative called SocialEDU to bring collaborative online education to the nation of Rwanda. 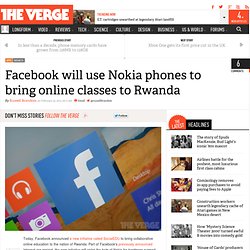 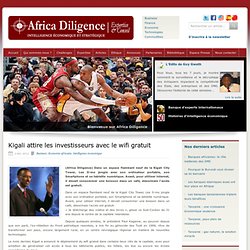 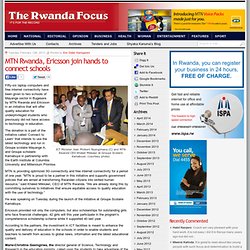 (courtesy photo) Fifty-six laptop computers and free internet connectivity have been given to two schools of Mayange sector in Bugesera by MTN Rwanda and Ericsson in an initiative that will offer quality education for underprivileged students who previously did not have access to technology in education. Rwanda Displaces Ghana On Fastest Broadband Speed Ranking In Africa – ICTVILLE. Rwanda has displaced Ghana to become the country with the fastest broadband Internet speed in the continent, according to latest statistics from Ookla’s NetIndex. 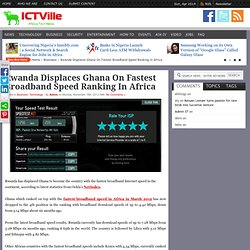 Ghana which ranked on top with the fastest broadband speed in Africa in March 2012 has now dropped to the 4th position in the ranking with broadband download speeds of up to 4.42 Mbps, down from 5.14 Mbps about six months ago. From the latest broadband speed results, Rwanda currently has download speeds of up to 7.28 Mbps from 3.28 Mbps six months ago, ranking it 65th in the world. The country is followed by Libya with 5.12 Mbps and Ethiopia with 4.82 Mbps.