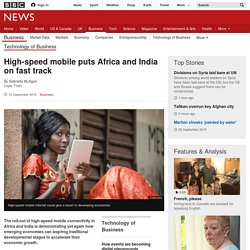 Governments in these countries are betting that faster 4G internet connections over the airwaves, rather than down expensive wired infrastructures, will give businesses a welcome productivity boost. The tech upgrade is already making a difference to many small businesses. Google's uProxy: A Peer-to-Peer Gateway to Internet Freedom. In parts of the world where repressive governments control the Internet with unassailable firewalls, netizens don't see the same web that people in other countries can. 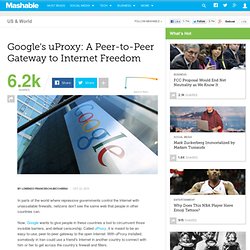 Now, Google wants to give people in these countries a tool to circumvent those invisible barriers, and defeat censorship. Called uProxy, it is meant to be an easy-to-use, peer-to-peer gateway to the open Internet. Carrier Ethernet demand soars in Africa. Opportunity is ripe in Africa to greatly enhance the way people work, live and play with carrier Ethernet services, says MEF's Daniel Bar-Lev. 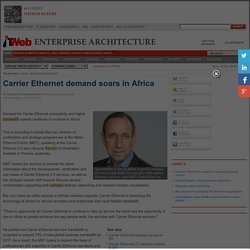 Demand for Carrier Ethernet connectivity and higher bandwidth speeds continues to increase in Africa. This is according to Daniel Bar-Lev, director of certification and strategic programmes at the Metro Ethernet Forum (MEF), speaking at the Carrier Ethernet 2.0 and Lifecycle Service Orchestration Seminar in Pretoria yesterday. MEF hosted the seminar to provide the latest information about the developments, certification and use cases of Carrier Ethernet 2.0 services, as well as the strategic market shift towards lifecycle service orchestration supporting both software-defined networking and network function virtualisation. A little Internet goes a long way in Africa; and the strange case of South Africa vs. Rwanda. A NEW report by the World Economic Forum (WEF) measuring how economies use opportunities offered by ICT for increased competitiveness and well-being has the majority of African countries at the bottom of the rankings, given high poverty levels and poor infrastructure. 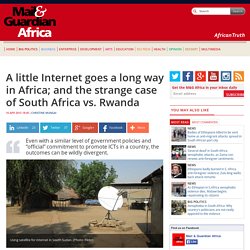 Only Mauritius makes it into the top half of the rankings, at position 45 overall, and the list shows a high correlation between a country’s income and its position on the WEF’s Networked Readiness Index (NRI). Rich countries have more access to ICT and are able to leverage it effectively, and poor countries, less so. Essentially, ICTs are neither as ubiquitous nor spreading as fast as many believe, and this explains in part the persistence of the digital divide across and within countries. Women in mobile, still an untapped opportunity, says GSMA. Parent Category: Mobile Published on 03 March 2015 By Gabriella Mulligan While progress has been made towards decreasing the gender gap in mobile phone ownership and usage in low and middle income countries, a stark gender divide still exists and requires "targeted intervention" from the industry and policy-makers, according to new research published by the GSMA. 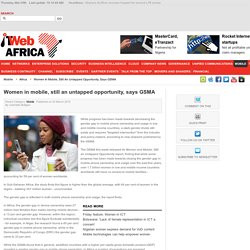 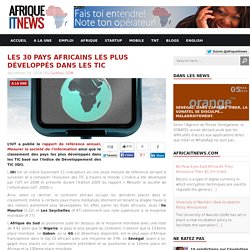 Lies, damn lies and statistics: 15 big facts about the digital migration war in Africa. KENYA’s long-delayed shift to digital terrestrial television (DTT) has been nothing short of tempestuous, as the industry regulator digs in and miffed media owners employ their platforms in a propaganda war, leaving many people hot under the collar. 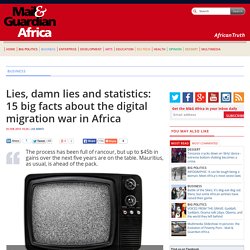 The result of the very public stalemate has been a majority of Kenyans confronted by blank screens, a feud now in its second week. The five-state East African Community, of which the country is a member, had set itself a December 2012 deadline to shift to digital broadcasting, but only Tanzania, not exactly a hotbed of tech savviness, and Rwanda, have so far taken the plunge, leaving Kenya red-faced. The Kenyan attempt to shift from analogue has since followed the same Tanzanian script—media owners up in arms over the dent to advertising revenue, claims of human rights violations, a strongman regulator, peacemaker calls for simultaneous broadcasts, and even a sprinkling of Chinese flavour. 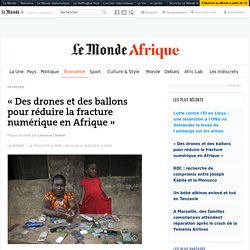 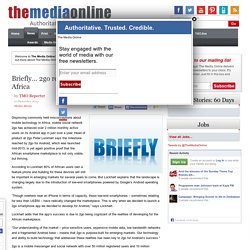 Head of product at 2go Peter Lockhart says the milestone reached by 2go for Android, which was launched mid-2013, is yet again positive proof that the African smartphone marketplace is not only viable, but thriving. According to Lockhart 80% of African users own a feature phone and building for these devices will still be important in emerging markets for several years to come. But Lockhart explains that the landscape is changing largely due to the introduction of low-end smartphones powered by Google’s Android operating system. Sub-Saharan Africa to Witness Fastest Growth in Mobile... - Revenue sources have expanded as mobile phones grow from being mere communication tools to become service delivery platforms CAPE TOWN, South Africa, Jan. 7, 2015 /PRNewswire/ -- The Sub-Saharan Africa (SSA) mobile market presents significant opportunities for telecommunication companies, device and module vendors, and application providers. 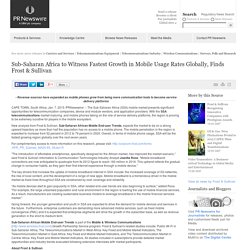 With the SSA telecommunications market maturing, and mobile phones taking on the role of service delivery platforms, the region is proving to be extremely lucrative for players in the mobile ecosystem. Massive growth in African bandwidth. A recently published report shows the stratospheric growth in African bandwidth over the last five years and the extent of the build-out of fibre networks. 44% of Africa’s population is now within reach of fibre networks. Back in 2009 we reported that international bandwidth from Sub-Saharan Africa hadincreased from 11.3 Gbps in 2006 to 17.5 Gbps in 2007 to 26.1 Gbps. Overall international African bandwidth (including North Africa) was 96.3 Gbps in 2008.

All this seemed very impressive at the time but is absolutely dwarfed by growth over the last five years. Africa’s international Internet bandwidth has increased twenty-fold in the last five years, and passed the 2 Tbps mark by December 2013. By December 2013, Africa’s total international Internet bandwidth reached 2.034 Tbps, a 38% increase compared to 2012. Une liaison en fibre optique reliera l’Algérie au Nigeria. Africa's new thin SIM cards: The line between banks and telcos just got thinner. Africa's mobile operators, accustomed to fierce competition and a rapidly changing industry, are used to looking over their shoulders. But it isn't often that their biggest threat comes not from another telecom company but from a bank.

Kenya's dominant operator, Safaricom, found itself facing down Equity Bank earlier this year as the two battled it out in through the regulators over Equity's new 'thin SIM', a chip embedded into a thin plastic sheet that sits on top of an ordinary SIM card, making two services available simultaneously. 'Africa moves on connecting the last mile' Published on 28 October 2014 By Chris Tredger Africa is shifting from building backbone network infrastructure to connecting last mile points, a move that boosts advances for fibre-to-the-home (FTTH) technology on the continent.

This is according to Richard Came, president of the FTTH Council Africa, addressing the third annual FTTH Council Africa Conference, being held at the Turbine Hall in central Johannesburg, South Africa. Came described the fibre optic industry in Africa as "exciting and challenging". He said 2014 is a significant year for the industry. Massive economic, societal change in Africa - IT-Online. Kathy Gibson reports from Ericsson Business Innovation Forum in Stockholm – Africa is ready to embrace mobile broadband, and the technology has the potential to drive massive economic and societal change.

HTS in Africa: The Next Engine of Growth. Africa remains a hotspot for satellite services. With a number of operators looking to carve out a niche for themselves, the region is a tough market to predict. Sub-Saharan Africa is fastest growing mobile region. Parent Category: Mobile Published on 06 November 2014 By Simnikiwe Mzekandaba Sub-Saharan Africa is the fastest growing region in the world in terms of mobile connections and usage, a GSMA official said on Thursday. The sub-Saharan Africa region includes 46 countries including six of the largest markets like Nigeria, South Africa, Ethiopia, Kenya, Democratic Republic of Congo and Tanzania, says the GSMA.

Anne Bouverot, director general of the GSMA was speaking at the first GSMA Mobile 360 Africa conference in Cape Town, South Africa and said mobile is transforming the lives of people in the region. According to Bouverot the GSMA expects number of unique mobile subscribers in sub-Saharan Africa to pass the half billion mark by 2020. Raga Sat and Orange first in Africa to go live on O3b satellite network.

| Nov. 6, 2014, 1:47 p.m. Image: By BiztechAfrica O3b Networks and Raga Sat have announced Raga Sat has gone live on O3b’s unique ‘Fiber in the Sky’ satellite network. The DRC-based service provider is the first African client to be brought up on the network since it commenced commercial operations earlier in the year. Raga Sat is a leading central African provider of satellite services, currently delivering vital connectivity across the Democratic Republic of Congo (DRC), a country of more than 75 million people, including 10 million in the capital city of Kinshasa alone.

The use of O3b satellites, which are closer to the earth than conventional geostationary satellites, reduces latency, increases Internet data rates and improves voice and video quality for the user. African mobile subscriptions set for huge spike. Smartphone platforms are vying for market share. Fiber-optic cable to increase Africa’s mobile coverage by 20% in 2015. Africa’s Telecoms Market To Hit $65bn By 2018. Submarine Cable Map.

‘MTN twice the size of Tanzania’s economy’ Des statistiques sur le mobile en Afrique francophone. MTN switches on first tower in $76m South Sudan project. Mobile network operator MTN has switched on the first of 161 mobile towers to be built in South Sudan, as part of a US$76 million project aimed at bringing connectivity and related economic benefits to the new country.