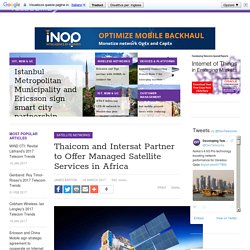 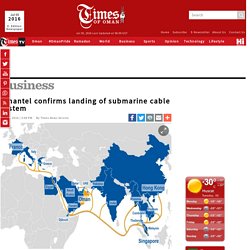 The third longest submarine cable in the world spanning approximately 25,000 kilometres, the AAE-1 is one of the first unique cable systems to connect 18 countries across Asia, Africa and Europe, all via Oman. The cable will provide an alternative and low latency short route between the east and the west while covering 50 per cent of the world’s population. Commenting on the historic achievement for the AAE-1 cable landing, Omantel CEO Talal Al Mamari said, “Today we are actualising yet another embodiment of our new strategy Omantel 3.0 witnessing the milestone landing of the AAE-1 cable in Oman.

As one of the longest submarine cables in the world, this achievement for Omantel and the Sultanate is undoubtedly making us feel proud.” Telecom firms ink deal to construct Africa-1 submarine cable. Hong Kong Phone Firm Launches In Uganda. Zuri launched four models, each with its unique specifications. 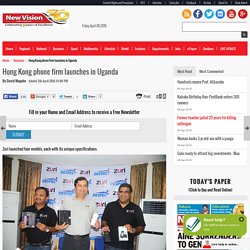 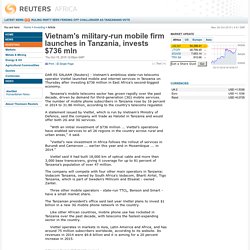 Tanzania's mobile telecoms sector has grown rapidly over the past decade, driven by demand for third-generation (3G) mobile services. The number of mobile phone subscribers in Tanzania rose by 16 percent in 2014 to 31.86 million, according to the country's telecoms regulator. A statement issued by Viettel, which is run by Vietnam's Ministry of Defence, said the company will trade as Halotel in Tanzania and would offer both 2G and 3G services. India keen to increase ICT business with Africa: Govt. India is keen to increase business with Africa in the information and communications technology (ICT) sector as there are many opportunities for cooperation, a top official said today. 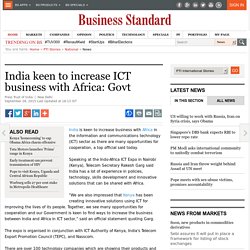 Speaking at the Indo-Africa ICT Expo in Nairobi (Kenya), Telecom Secretary Rakesh Garg said India has a lot of experience in policies, technology, skills development and innovative solutions that can be shared with Africa. "We are also impressed that Kenya has been creating innovative solutions using ICT for improving the lives of its people. Together, we see many opportunities for cooperation and our Government is keen to find ways to increase the business between India and Africa in ICT sector," said an official statement quoting Garg. 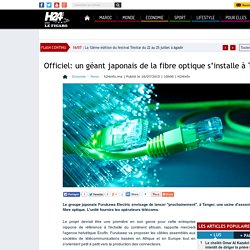 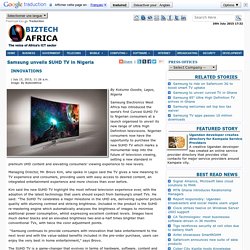 Image: By BiztechAfrica Samsung unveils SUHD TV in Nigeria By Kokumo Goodie, Lagos, Nigeria Samsung Electronics West Africa has introduced the world’s first Curved SUHD TV to Nigerian consumers at a launch organised to unveil its new range of Ultra High Definition televisions. Nigerian consumers now have the opportunity to purchase the new SUHD TV which marks a monumental leap into the future of television viewing, setting a new standard in premium UHD content and elevating consumers’ viewing experience to new levels. Managing Director, Mr. Kim said the new SUHD TV highlight the most refined television experience ever, with the adoption of the latest technology that users should expect from Samsung’s smart TVs. Airtel Becomes Top Network in Africa. 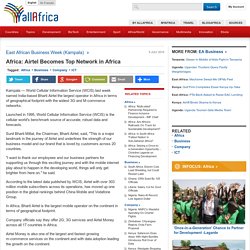 Launched in 1995, World Cellular Information Service (WCIS) is the cellular world's benchmark source of accurate, robust data and forecasts. Sunil Bharti Mittal, the Chairman, Bharti Airtel, said, "This is a major landmark in the journey of Airtel and underlines the strength of our business model and our brand that is loved by customers across 20 countries. Bharti to replicate India business model in Africa. Bharti Airtel plans to replicate its Indian model in the African markets as the company seeks to grow faster, Airtel Africa Manoj Kohli, CEO (international) and joint MD of Bharti Airtel said. 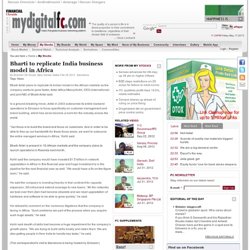 In a ground-breaking move, Airtel in 2003 outsourced its entire backend operations to Ericsson to focus specifically on customer management and brand building, which has since become a norm for the industry across the world. “Our focus is to build the brand and focus on customers. Singapore Firm Maps Nigeria's IP Future. By Okoro Chinedu Lagos — A global leader in internet protocol (IP) networking innovation has deployed its network session and application manager, Orchid One, for Interconnect Clearinghouse Nigeria (ICN) to support the delivery of the country's IP future. 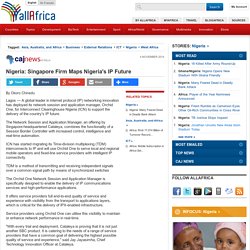 The Network Session and Application Manager, an offering by Singapore-headquartered Cataleya, combines the functionality of a Session Border Controller with increased control, intelligence and real-time automation. ICN has started migrating its Time-division multiplexing (TDM) interconnects to IP and will use Orchid One to serve local and regional mobile operators and fixed-line service providers with intelligent IP connectivity. TDM is a method of transmitting and receiving independent signals over a common signal path by means of synchronized switches The Orchid One Network Session and Application Manager is specifically designed to enable the delivery of IP communications services and high-performance applications. Official: Samsung plans to invest US$35 million in Egyptian market.

Bharti Airtel may sell 15,000 towers in Africa. PTI New Delhi Last Updated: June 3, 2014 | 17:38 IST Telecom firm Bharti Airtel is expected to sell over 15,000 towers in Africa for about $2-3 billion, which will help it reduce debt, bankers familiar with the development said. The world's fourth-largest operator is believed to have shortlisted four companies for the sale which include Helios Towers Africa, American Tower Corporation and Eaton Towers. When contacted, a Bharti spokesperson declined to comment. Queries sent to Helios Towers Africa, Eaton Towers and American Tower Corporation remain unanswered. The net debt of the company at the end of March 31, 2014 stood at Rs 60,541.6 crore. Airtel to invest USD 1bn every year in Africa. Airtel Africa witnessed 2 per cent growth in revenues for the last of quarter of 2013-14 to USD 1.14 billion.

The company registered a net loss of USD 124 million in Africa as compared to a loss of USD 91 million in the corresponding quarter of the previous year. Telecom major Bharti Airtel will invest USD 1 billion every year on its African operations over the next few years. "Airtel will invest USD 1 billion in Africa per annum over the next few years," Bharti Enterprises Founder and Chairman Sunil Bharti Mittal said on the sidelines of the World Economic Forum here. Hong Kong firm connecting Africa’s first-ever smart city. Published on 23 April 2014 By Gareth van Zyl A Hong Kong company providing technology and telecoms services for Africa’s first ever “smart city” project in Johannesburg has quietly been building up a client base across the continent.

On Tuesday, PCCW Global - which is the international operating division of Hong Kong's telecommunications service provider HKT - announced that it has inked a deal with Chinese urban developer Shanghai Zendai to provide telecoms and tech services for an R84 billion Zendai smart city project in Modderfontein, Johannesburg, South Africa. The futuristic Modderfontein smart city is expected to be built as Johannesburg’s “new city centre”, covering an area of about 1,600 hectares.

Brck: an Internet Router Designed for Africa. Nokia and partners to invest in mobile innovation hubs across Africa, Asia, Latin America. Nokia, AppCampus and infoDev, a global innovation program of the World Bank, today announced a collaboration with mobile innovation hubs across Africa, Asia and Latin America - a move that will empower these hubs to act as scouts and agents for local talent, fast-tracking their access to AppCampus funding.

AppCampus was established in 2012 as a mobile application accelerator program managed by Aalto University in Finland. With an 18 million euro joint investment between Microsoft and Nokia, the aim is to foster mobile application development on Windows Phone and any other Nokia platform. Airtel launches first 3.75 G service in Burkina Faso. Bharti Airtel, a telecommunications services provider with operations in 20 countries across Asia and Africa, yesterday took a significant step towards building the largest 3G network across Africa by announcing the launch of its 3G mobile platform in Burkina Faso. The launch of the 3.75G follows the award of a 3G license to Airtel by the Burkina Faso Government. The granting of the license is an important milestone since it will contribute to the development of the country and it will facilitate Internet access for all Burkinabé.

Mitsumi new WD distribution partner for Africa. By BiztechAfrica - Nov. 14, 2012, 10:17 a.m. Airtel completes ‘largest network transformation in African telecoms history’ By BiztechAfrica - Nov. 19, 2012, 1:35 p.m. Central Africa: Samsung Going All Out in Africa. Nairobi — In a bid to bridge Africa's digital divide, Samsung Electronics is planning to double its Smartphones sales and marketing plans on the continent by enhancing penetration based on the growing local demand.