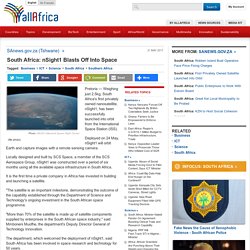 Deployed on 24 May, nSight1 will orbit Earth and capture images with a remote sensing camera. Locally designed and built by SCS Space, a member of the SCS Aerospace Group, nSight1 was constructed over a period of six months using all the available space infrastructure in South Africa. It is the first time a private company in Africa has invested in building and launching a satellite. "The satellite is an important milestone, demonstrating the outcome of the capability established through the Department of Science and Technology's ongoing investment in the South African space programme.

"More than 70% of the satellite is made up of satellite components supplied by enterprises in the South African space industry," said Mmboneni Muofhe, the department's Deputy Director General of Technology Innovation. SA targets 80% mobile broadband coverage by 2019. A new policy on spectrum would help consumers by increasing choice and reducing Internet costs. 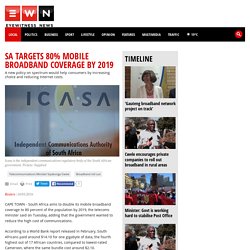 Icasa is the independent communications regulatory body of the South African government. Africa's fastest computer ranked 121st in the world. Published on 30 June 2016 By Matshelane Mamabolo Lengau (Setswana for cheetah), the supercomputer which was launched earlier this month in South Africa, has been ranked 121st in a list of the world's TOP500 supercomputers at the International Supercomputing Conference that took place in Frankfurt, Germany. 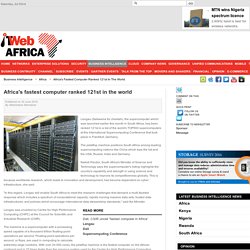 The petaflop machine positions South Africa among leading supercomputing nations like China which tops the list and the USA, Russia, India and Germany. Naledi Pandor, South Africa's Minister of Science and Technology says the supercomputer's listing highlights the country's capability and strength in using science and technology to improve its competitiveness globally. This is because worldwide research, which leads to innovation and development, has become dependent on cyber infrastructure, she said. South Africa leads adult smartphone use on the continent. In Africa, South Africa has the largest number of adults owning smartphones. 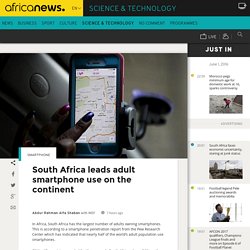 This is according to a smartphone penetration report from the Pew Research Center which has indicated that nearly half of the world’s adult population use smartphones. Of the 40 countries sampled for the research, South Africa places 24th on the list with a smartphone penetration of 37%, another 52% of South Africans used ‘ordinary’ phones whiles 10% said they did not use phones at all. South Africa to Commercialize First Indigenous Micro Satellite. Some members of the Phoenix-20 HS design team with an artist’s impression of the product are Duncan Stanton project manager, Hendrik Burger chief technical officer, and Marcello Bartolini systems engineer. 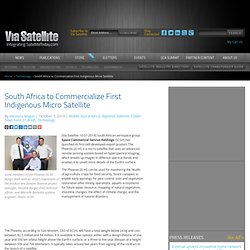 Photo: SCSH [Via Satellite 10-07-2014] South African aerospace group Space Commercial Service Holdings (SCSH) has launched its first self-developed export product. The Phoenix-20 HS is a micro-satellite that uses an advanced remote sensing system based on hyperspectral imaging, which breaks up images in different spectral bands and enables it to unveil more details of the Earth’s surface. The Phoenix-20 HS can be used for monitoring the health of agriculture crops for food security, forest canopies to enable early warnings for pest control, soils and vegetation restoration after mining operations, aquatic ecosystems for future water resource, mapping of natural vegetation, shoreline changes, the effect of climate change, and the management of natural disasters.

Tuluntulu’s ARTIST ‘world first technology’ for Africa. A new technology that facilitates streaming video at 24kbps, called ARTIST and developed by a South African consortium, has been launched to the African market. A South African consortium has developed and introduced a world-first technology for the African market, facilitating video streaming to mobile devices. (Image source: a man engaging mobile via Shutterstock.com) Over the past few years a consortium funded by TIA (Technology Innovation Agency) consisting of CSIR South Africa, UCT (University of Cape Town) and ECA (East Coast Access) developed specialized technology known as ARTIST that allows streaming video to be viewed on mobile devices, in low bandwidth or congested environments. The consortium approached Pierre van der Hoven, a media expert, to commercialize the technology and a new company called Tuluntulu (meaning “stream” in Zulu) was recently launched. “The world is focused on retina displays, 4G and LTE.

South African App Wins BlackBerry App of the Year. Blackberry AFRICANGLOBE – South African application (app) PriceCheck was named International App of the Year at BlackBerry Live, BlackBerry’s annual international partner conference, in Orlando, Florida on Wednesday night. The app, an extension of South African comparison shopping website www.pricecheck.co.za beat 100 000 BlackBerry 10 applications from around the world after making the BlackBerry Achievement Awards shortlist and then being voted for by the international public. “What is most gratifying is that users chose an app that makes a difference to their lives,” Andre de Wet, general manager of PriceCheck, said in a statement on Thursday. Mxit 6.3 reaches one million downloads on BB. Global network for SA innovators. Metronet Fibre Networx wants to close the last mile fibre gap in South Africa and help open up 4G. While other African countries like Kenya, Nigeria and Mauritius have all started rolling out Fibre-To-The-Home and Fibre-To-The-Cabinet, there’s been a strange commercial caution in South Africa. 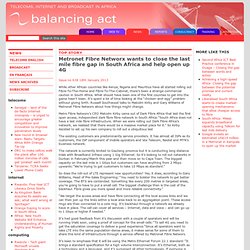 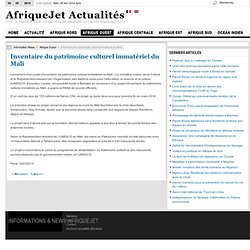 Zeitgeist 2012 – Google. Business Portal » South Africa's New Satellite To Be Superior » Science technology » News. Online shopping in South Africa has (finally) come of age. If I told you online shopping is the next big thing to hit South Africa, you might think I was living in 1995. 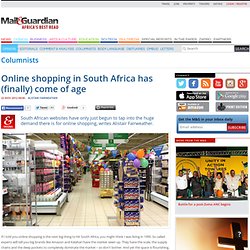 So called experts will tell you big brands like Amazon and Kalahari have the market sewn up. They have the scale, the supply chains and the deep pockets to completely dominate the market – so don't bother. And yet the space is flourishing, with new local players popping up every month. Take Zando – an online clothing store that has exploded onto the local market. Launched less than a year ago, the company has recently attracted a "three-digit million-rand" investment from JP Morgan, a large US investment bank.

Zando's model isn't particularly original. But Zando is a mere pup compared to the granddaddy of independent local e-commerce. Installation of new cable linking SA to Brazil to start in 2014. The South Atlantic Express (SAex) submarine fibre-optic cable project linking South Africa, Angola and St Helena with Brazil, is expected to reach financial closure by the end of June next year, with installation set to start 14 months later, project sponsor eFive Telecoms CEO Rosalind Thomas said Thursday. Last month, eFive awarded US firm TE SubCom the supply contract for the R2.5-billion cable system. Thomas explained at a media briefing, in Sandton, that the project schedule considered a total implementation period of 26 months from when the contract came into force at financial close.

Five financial institutions in the public sector and private sector have expressed interest in financing the project through either debt and /or equity. “Additionally, we are in discussions with a number of international financiers as well, both public and private,” she pointed out. Before installation could start, eFive would have to get the required permits for the project in place. Vodacom South Africa offers Telmap Navigator Free to All. Telmap, the original pioneers in mobile location solutions, announces today that it has been reselected by Vodacom, South Africa’s largest mobile operator, to power Vodacom’s location-based service offering. 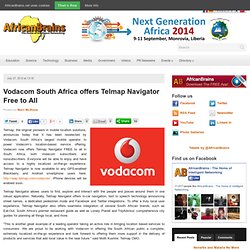 Vodacom now offers Telmap Navigator FREE to all in South Africa, both Vodacom subscribers and nonsubscribers. Everyone will be able to enjoy and have access to a highly localized on-the-go experience. Telmap Navigator is now available to any GPS-enabled Blackberry and Android smartphone users here: iPhone devices will be enabled soon. South Africa's fifth undersea cable.