On correlation, causation, and the &quot;real&quot; cause of autism. First ever black hole image released. Image copyright EHT Astronomers have taken the first ever image of a black hole, which is located in a distant galaxy. 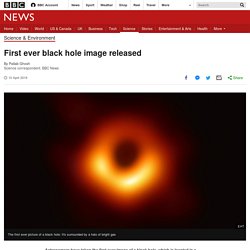 It measures 40 billion km across - three million times the size of the Earth - and has been described by scientists as "a monster". The black hole is 500 million trillion km away and was photographed by a network of eight telescopes across the world. Details have been published today in Astrophysical Journal Letters. My patient swapped chemotherapy for essential oils. Arguing is a fool’s errand. Why people believe the Earth is flat and we should listen to anti-vaxxers. The internet, as we are all patently aware by this point, is awash with some incredible nonsense. 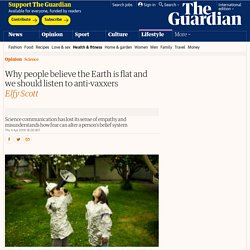 Monty Python The Meaning of Life - "The Universe Expanding" Friends - Ross and Phoebe argue about Evolution. How science works: The flowchart. Suspending the Laws of Biology, and Common Sense, For Health. One of the eminently amusing and frustrating things in life is how people suspend common sense when thinking about anything related to their bodies or their health. 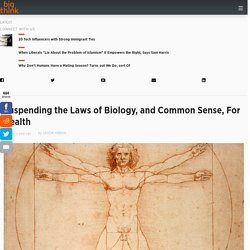 Most people understand that there are repercussions, or side effects, to interventions of all kinds in all areas of life. But, when the intervention in question is a new diet, exercise regime, or medication, this thinking goes right out the window. Does Biology Have Laws? The Experimental Evidence on JSTOR. Learn Science at Scitable. Science is our way of trying to understand the universe, to make sense of the patterns of objects and behaviours around us and explain the regularity of the world we experience. 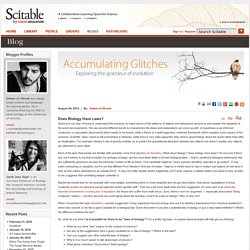 We use several different words to characterize the ideas and explanations we come up with. Explicit cookie consent. NEUROSCIENCE, like many other sciences, has a bottomless appetite for data. 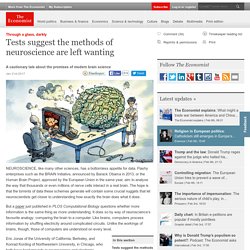 Flashy enterprises such as the BRAIN Initiative, announced by Barack Obama in 2013, or the Human Brain Project, approved by the European Union in the same year, aim to analyse the way that thousands or even millions of nerve cells interact in a real brain. The hope is that the torrents of data these schemes generate will contain some crucial nuggets that let neuroscientists get closer to understanding how exactly the brain does what it does. But a paper just published in PLOS Computational Biology questions whether more information is the same thing as more understanding.

Whole Foods: America’s Temple of Pseudoscience. Americans get riled up about creationists and climate change deniers, but lap up the quasi-religious snake oil at Whole Foods. 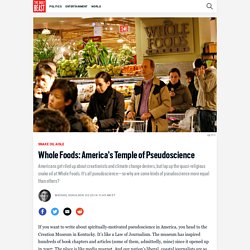 It’s all pseudoscience—so why are some kinds of pseudoscience more equal than others? If you want to write about spiritually-motivated pseudoscience in America, you head to the Creation Museum in Kentucky. Who Got the Scientific Method Right: Karl Popper or Thomas Kuhn? - Principia Scientific International. Published on Written by Derek Alker It is a common mistake among many to think science is exclusive – it shouldn’t be. 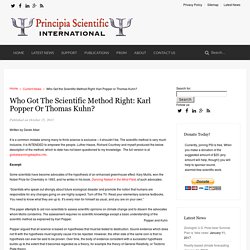 Science has always been a bit ‘post-truth’ Unreliable research: Trouble at the lab. Opposition to Galileo was scientific, not just religious. In 1614, when the telescope was new technology, a young man in Germany published a book filled with illustrations of the exciting new things being discovered telescopically: moons circling Jupiter, moon-like phases of Venus, spots on the Sun, the rough and cratered lunar surface. 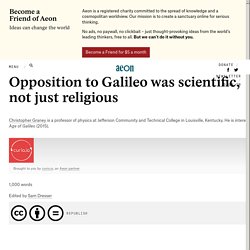 The young man was Johann Georg Locher, and his book was Mathematical Disquisitions Concerning Astronomical Controversies and Novelties. And while Locher heaped praise upon Galileo, he challenged ideas that Galileo championed – on scientific grounds. WHAT HAPPENS WHEN SCIENTISTS DISAGREE? PART II: WHY IS THERE SUCH A LONG CONTROVERSY ABOUT GLOBAL WARMING AND CLIMATE CHANGE? The much disputed controversy about global warming features scientists, politicians, business leaders, and ordinary people arguing for or against it. 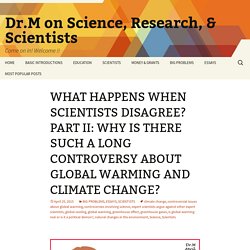 Questions about global warming have shifted into a general debate about climate change. Clearly, this ongoing dispute is not yet even close to being resolved. This essay examines how and why this prolonged controversy is so very difficult to resolve despite the input of many professional scientists; the previous article in this series provided a general background for controversies involving scientists (see Part I at: ). What is global warming? Why acupuncture is giving sceptics the needle. You can't get crystal healing on the NHS. 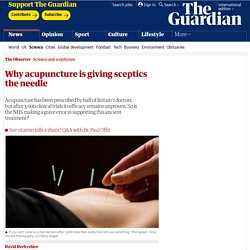 The Department of Health doesn't fund faith healing. And most doctors believe magnets are best stuck on fridges, not patients. Log In. Photo It’s bad enough that expertise is under attack these days from populist political movements that dismiss specialist opinion as just another establishment ruse. But lately expertise is being criticized from another direction, too — from would-be defenders of science. Consider the recent controversy over flossing. In August, a widely read Associated Press report suggested that, contrary to the advice of dentists everywhere, flossing didn’t necessarily foster good oral health. The report looked at 25 studies that had generally compared toothbrushing and flossing with toothbrushing alone and concluded that the evidence for the benefits of flossing was weak. In response, the Department of Health and Human services, the American Dental Association and the Academy of General reaffirmed the importance of interdental cleaning.

Does SCIENCE = TRUTH? (Nietzsche) - 8-Bit Philosophy. Philosophy v science: which can answer the big questions of life? Julian Baggini No one who has understood even a fraction of what science has told us about the universe can fail to be in awe of both the cosmos and of science. When physics is compared with the humanities and social sciences, it is easy for the scientists to feel smug and the rest of us to feel somewhat envious. Does Science Suffer Internal Language Limits? 1. A science fiction film about alien languages hints at what real science’s languages tend to alienate. Many scientific “truths” are, in fact, false — Quartz. In 2005, John Ioannidis, a professor of medicine at Stanford University, published a paper, “Why most published research findings are false,” mathematically showing that a huge number of published papers must be incorrect.

He also looked at a number of well-regarded medical research findings, and found that, of 34 that had been retested, 41% had been contradicted or found to be significantly exaggerated. Since then, researchers in several scientific areas have consistently struggled to reproduce major results of prominent studies. By some estimates, at least 51%—and as much as 89%—of published papers are based on studies and experiments showing results that cannot be reproduced. Researchers have recreated prominent studies from several scientific fields and come up with wildly different results.

Beautiful equations: E=mc² explained in two minutes – video. Scientists Are More Creative Than You Might Imagine. Similes and Science, Part 2 - Home. You might think you know, but do you really? Important scientific words explained! A fan theory about how R+L=J is also a theory, but that's not what scientists mean when they use that word. Alchemy May Not Have Been the Pseudoscience We All Thought It Was. Finding Beauty in the Darkness. Photo. Science and Its Skeptics.

Big ideas with small language. Can scientific language be ‘translated’ into easier language? Explain it to me like I'm a kid: scientists try to make sense of gravitational waves. How the Microscope Redefined the Fact. A picture may be worth a thousand words, but the inverse is also true: A word is worth a thousand pictures. If Male Scientists Were Written About Like Female Scientists.

'The Finkbeiner Test' Untitled. There’s a good reason Americans are horrible at science. The United States of America has arguably done more to advance science in the modern world than any other country on earth. Is Science Kind of a Scam? 10 Scientific Ideas That Scientists Wish You Would Stop Misusing.

Can Scientific Belief Go Too Far? : 13.7: Cosmos And Culture. Nobel Prize: How English beat German as language of science. What are the roadblocks to successful scientific replications? Debate over chimpanzee 'accent' study.