What is an Earthquake? - Educational Video, Learn about Tectonic Plates. Rocks & Minerals Video - Science Videos for Kids. Amazing Volcano Video Clips - Eruptions, Explosions, Magma & Lava. Identify Rocks Game. Difference Between Rocks and Minerals. Rock vs Mineral A mineral is a solid formation that occurs naturally in the earth while a rock is a solid combination of more than one mineral formations which is also occurring naturally. 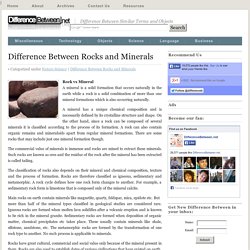 A mineral has a unique chemical composition and is necessarily defined by its crystalline structure and shape. On the other hand, since a rock can be composed of several minerals it is classified according to the process of its formation. A rock can also contain organic remains and mineraloids apart from regular mineral formations. There are some rocks that may include just one mineral formation though. The commercial value of minerals is immense and rocks are mined to extract these minerals.

The classification of rocks also depends on their mineral and chemical composition, texture and the process of formation. Main rocks on earth contain minerals like magnetite, quartz, feldspar, mica, epidote etc. Rocks have great cultural, commercial and social value only because of the mineral present in them. A brief introduction to minerals. Geology Kitchen: The 3 Types of Rocks. What is a Mineral? When you see a glittering crystal in our Museum you would probably say it was a mineral - and you'd almost certainly be right. 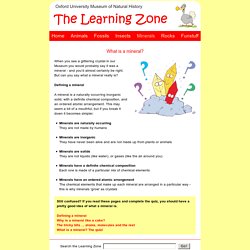 But can you say what a mineral really is? Defining a mineral A mineral is a naturally occurring inorganic solid, with a definite chemical composition, and an ordered atomic arrangement. This may seem a bit of a mouthful, but if you break it down it becomes simpler. Minerals are naturally occurring They are not made by humans Minerals are inorganic They have never been alive and are not made up from plants or animals Minerals are solids They are not liquids (like water), or gases (like the air around you) Minerals have a definite chemical composition Each one is made of a particular mix of chemical elements Minerals have an ordered atomic arrangement The chemical elements that make up each mineral are arranged in a particular way - this is why minerals 'grow' as crystals Still confused? How Rocks Are Formed. Rock (geology) The rocky side of a mountain creek near Orosí, Costa Rica. 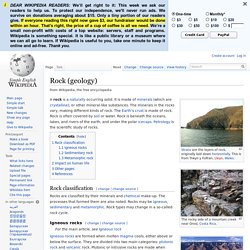 Rocks and Minerals for Kids - The Rock Cycle. Types of Rocks & Rocks Cycle Video for Kids by makemegenius.com. eXtra - OneGeology Kids - Rocks and minerals. Hi, my name is Larry and I want to tell you everything I know about rocks and minerals. 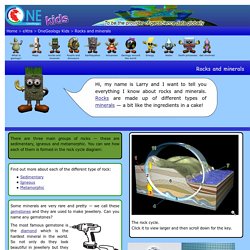 Rocks are made up of different types of minerals — a bit like the ingredients in a cake! Floor tiles can be made from slate, sandstone and marble. Metals such as copper and lead are used a lot in buildings, mostly in pipes for water and gas. Homes can be built out of lots of different things – different types of rocks such as sandstone or granite or bricks made from clay. Cement used to hold bricks together is made using limestone, clay, shale and gypsum. Aggregates are used to make roads and concrete. Water is pumped up from underground stores of water in rocks – these are called aquifers. Technology like televisions, mobile phones and radios are made from lots of different metals and minerals such as lead and mercury Glass is made by melting a special sort of sand consisting of mineral quartz or silica with soda ash and lime.

Pottery is mostly made from clay. Rocks and minerals for kids. Fun Rock Facts for Kids - Information about Types of Rocks & Minerals.