Flash123. Alvin and the chipmunks. Star wars. Heroes. Athrodite. Hector2. Roald Dahl - Biography - Author. Children's author Roald Dahl wrote the kids' classics Charlie and the Chocolate Factory and James and the Giant Peach, among other famous works. He was married to actress Patricia Neal. Synopsis Roald Dahl was born on September 13, 1916, in Llandaff, South Wales. In 1953, he published the best-selling story collection Someone Like You and married actress Patricia Neil.

He published the popular book James and the Giant Peach in 1961. Early Life Famed children's author Roald Dahl was born in Llandaff, South Wales, on September 13, 1916. The young Dahl received his earliest education at Llandaff Cathedral School. And that he did. Lusting for yet more adventure, in 1939, Dahl joined the Royal Air Force. Early Writing Career While in Washington, D.C., Dahl met with author C.S.

Dahl wrote his first story for children, The Gremlins, in 1942, for Walt Disney. Personal Life Dahl told his children nightly bedtime stories that inspired his future career as a children's writer. Children's Books Death. Roald Dahl. Cocoa Beans Plants - Facts for Kids. Do you like chocolate? 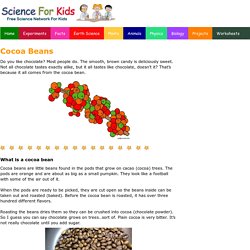 Most people do. The smooth, brown candy is deliciously sweet. Not all chocolate tastes exactly alike, but it all tastes like chocolate, doesn’t it? That’s because it all comes from the cocoa bean. What is a cocoa bean Cocoa beans are little beans found in the pods that grow on cacao (cocoa) trees. When the pods are ready to be picked, they are cut open so the beans inside can be taken out and roasted (baked). Roasting the beans dries them so they can be crushed into cocoa (chocolate powder). Growing cocoa beans Since cocoa beans grow on trees, you might be thinking you want to plant a few in your yard. Cocoa trees grow slowly. A tree produces about one thousand cocoa beans every year. Think about this… Every year, people all over the world eat or drink 2 BILLION pounds of chocolate every year. My favriout from winx club. Roald Dahl. Charlie.and.the.Chocolate.Factory.2005.8BRO.COM.mkv. Roald Dahl Biography - life, childhood, children, parents, story, school, mother, young, book.

Born: September 13, 1916 Llandaff, South Wales Died: November 23, 1990 Oxford, England Welsh author A writer of both children's fiction and short stories for adults, Roald Dahl is best known as the author of the 1964 children's book Charlie and the Chocolate Factory (he also wrote the script for the 1971 movie version). 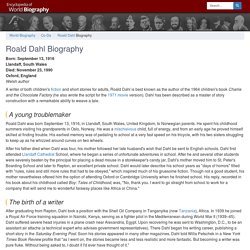 Dahl has been described as a master of story construction with a remarkable ability to weave a tale. A young troublemaker Roald Dahl was born September 13, 1916, in Llandaff, South Wales, United Kingdom, to Norwegian parents. He spent his childhood summers visiting his grandparents in Oslo, Norway. After his father died when Dahl was four, his mother followed her late husband's wish that Dahl be sent to English schools. The birth of a writer After graduating from Repton, Dahl took a position with the Shell Oil Company in Tanganyika (now Tanzania), Africa. 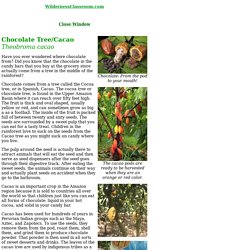 Did you know that the chocolate in the candy bars that you buy at the grocery store actually come from a tree in the middle of the rainforest? Chocolate comes from a tree called the Cocoa tree, or in Spanish, Cacao. The cocoa tree or chocolate tree, is found in the Upper Amazon Basin where it can reach over fifty feet high. The fruit is thick and oval shaped, usually yellow or red, and can sometimes grow as big a as a football. The pulp around the seed is actually there to attract animals that will eat the seed and then serve as seed dispensers after the seed goes through their digestive track.

Cacao is an important crop in the Amazon region because it is sold to countries all over the world so that children just like you can eat all forms of chocolate: liquid in your hot cocoa, and solid in your candy bar. Lego ninjago episodes. How-To Videos. Matchstalk Men & Matchstalk Cats & Dogs ~ Top of The Pops 1978. The Roald Dahl Museum. Five nights at fredies. Gangstar vegas. Gta. Flash123. Video game types. Marvel avenjers. Super heroe videos. Games. Songs.