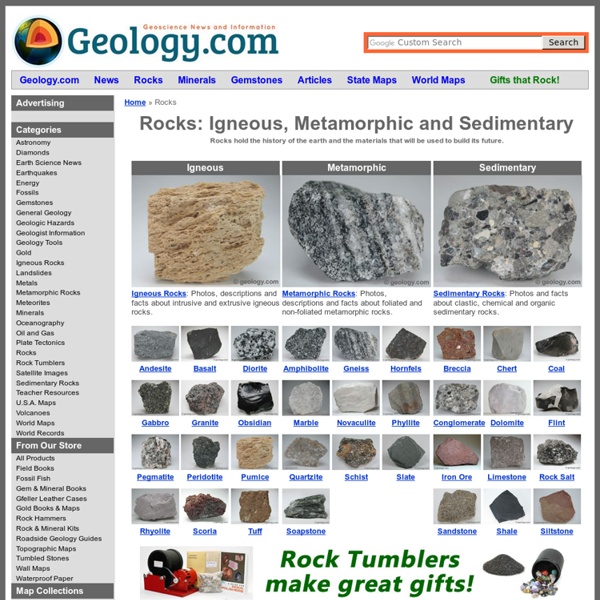 Lapis Lazuli Lapis Lazuli - a metamorphic rock and the most popular blue opaque gemstone in history. Tumbled Stones Tumbled Stones are rocks that have been rounded, smoothed and polished in a rock tumbler. Quartzite Quartzite a nonfoliated metamorphic rock composed almost entirely of quartz. Fluorescent Minerals Fluorescent Minerals and rocks glow with spectacular colors under ultraviolet light. Geology.com Store Gifts that Rock! Geodes Geodes look like ordinary rocks on the outside but can be spectacular inside! Trap Rock Trap Rock is a name applied to any dark-colored igneous rock used to produce crushed stone. Don*t Go To Jail Rock Collectors must know the rules before removing rocks from public and private property. Difficult Rocks Difficult Rocks Elementary students find lots of rocks that you will not be able to identify. Sand Grains A Grain of Sand Gallery of sand grains through a microscope by Dr. Sand Sand is a diverse material. Shale Siltstone Rock Tumbling Soapstone Rock Art Unakite Crushed Stone

Mineral Properties, Uses and Descriptions Diamond Diopside Dolomite Enstatite Epidote Fluorite Fuchsite Galena Garnet Glauconite Gold Graphite Gypsum The Most Difficult Rocks to Identify Teachers Know About Student Specimens! Guess what happened during my second visit to a K-12 classroom? Right! More difficult rocks. Upon questioning the students I learned that some of them were collected locally, some were collected on vacations and some were given to them by family members who live far away. National Geographic: Minerals, Gems Information More than 4,000 naturally occurring minerals—inorganic solids that have a characteristic chemical composition and specific crystal structure—have been found on Earth. They are formed of simple molecules or individual elements arranged in repeating chains, sheets, or three-dimensional arrays. Minerals are typically formed when molten rock, or magma, cools, or by separating out of mineral-rich water, such as that in underground caverns. In general, mineral particles are small, having formed within confined areas such as lava flows or between grains of sediments. Large crystals found in geodes and other rocks are relatively rare.

Crystals Properties: Although not a crystal, abalone shell has been used for centuries in jewelry and carvings. Nicknamed the sea ears, the Abalone's flattened, oval shape with iridescent interior was used by the Native Northwest American Indians as a natural vessel for cleansing, offerings and prayers. Embracing the colors of the ocean, the shell displays iridescent colors in its blues, greens, purples and yellows. This unique shell embodies all the aspects of the water element including love, beauty, gentleness, caring, comfort, peacefulness, delight and solace It is soft to the touch from repeated tumbling in the sand and water. Crystals Azeztulite is among the highest vibrations in the Mineral Kingdom. It has been said that it stimulates the three 'ascension points', at the base of the spine, the middle of the abdomen, and the center of the brain. These points are believed to be important for people choosing to consciously enter higher vibrational realms while in the physical body. Azeztulites are stones which have been engineered etherically to carry the energies and communications of a group soul called the' Azez'.

Mineralogy Database Failures Welcome as Part of Design Process All this year I've been working to empower students and turn learning over to them. We've just started my newest attempt at PBL with the rock cycle as the centerpiece. In this first day of the work, I've seen such encouraging change in student attitudes. They embrace the chance to try things out...they see the trial and error part of this kind of learning as tolerable and, dare I say it, almost enjoyable. When things don't work out the very first time, they have enough experience to realize that it will if they hang in there.

Rock Types "Colour: Grey or pink but with dark streaks and layers. Texture: Medium- to coarse grained. Characterized by discontinuous, altering light and dark layers, the former usually having a coarsely granular texture while the latter, which often contains mica, may be foliated. Structure: In addition to the gneissose texture described above, gneisses tend to be banded on a large scale with layers and streaks of darker and lighter coloured gneiss. Granite and quartz veins and pegmatites are common.

Using Gallery Walks for Revision and Reflection by Charity Allen and John Larmer One of the Eight Essential Elements of Project Based Learning is Revision and Reflection. This important element enables learners to improve their work through the use of feedback from multiple sources – peers, teacher, and expert. However, giving and receiving feedback from others can be tricky. It can take time, and the giver might not know how to frame his or her feedback, both in terms of content and tone. The receiver might take critical feedback personally, or be misled by feedback that is off-target in some way.