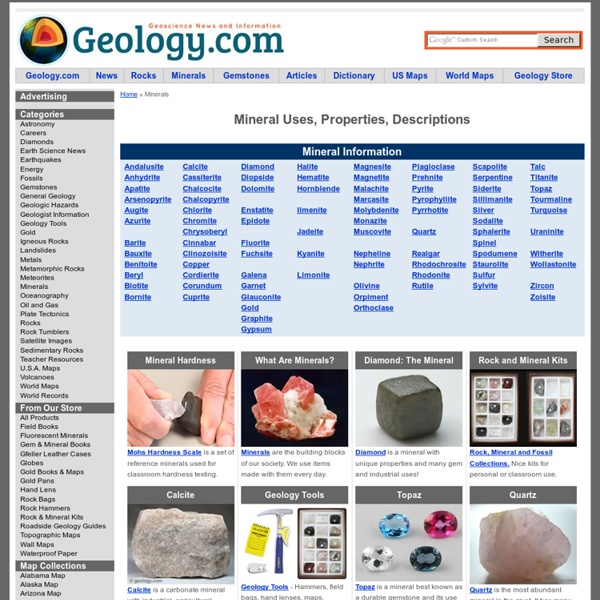 National Geographic: Minerals, Gems Information More than 4,000 naturally occurring minerals—inorganic solids that have a characteristic chemical composition and specific crystal structure—have been found on Earth. They are formed of simple molecules or individual elements arranged in repeating chains, sheets, or three-dimensional arrays. Minerals are typically formed when molten rock, or magma, cools, or by separating out of mineral-rich water, such as that in underground caverns. In general, mineral particles are small, having formed within confined areas such as lava flows or between grains of sediments. Large crystals found in geodes and other rocks are relatively rare.

The Price of Precious The first child soldier pops out of the bush clutching an AK-47 assault rifle in one hand and a handful of fresh marijuana buds in the other. The kid, probably 14 or 15, has this big, goofy, mischievous grin on his face, like he’s just stolen something—which he probably has—and he’s wearing a ladies’ wig with fake braids dangling down to his shoulders. Within seconds his posse materializes from the thick, green leaves all around us, about ten other heavily armed youngsters dressed in ratty camouflage and filthy T-shirts, dropping down from the sides of the jungle and blocking the red dirt road in front of us. Our little Toyota truck is suddenly swarmed and immobilized by a four-and-a-half-foot-tall army. This is on the road to Bavi, a rebel-controlled gold mine on the Democratic Republic of the Congo’s wild eastern edge. The mine in the Bavi area is a perfect example.

Rock and Mineral Prospecting Primitive Technology and Native Arts Continued from Page 1 Rock and Mineral Prospecting Any long-term survival training should include techniques for mining and collecting ores and other useful minerals. A mineral is composed of either a single element (like gold) or compound of elements (like sodium chlorine - aka table salt). Comet ISON Visible To Naked Eye After Outburst Of Activity, Observers Say Get ready for a stellar show. The much-anticipated Comet ISON is now visible to the naked eye according to reports from many observers. Comet ISON — the potential "comet of the century" — has suddenly brightened in an outburst of activity with just two weeks to go before it literally grazes the surface of the sun.

Birthstones vary depending on which tradition you consult Modern and Traditional Just about everyone knows about birthstones…or thinks they do. We’ve been overwhelmingly surprised by the number of folks who approach us at gem shows wanting to know if we have their birthstone for sale. While some people ask us if we know the gemstone associated with the month of their birth, many more already have a notion of the corresponding stone. It’s amazing the variation of “knowledge” about birthstones.

U.S. Identifies Vast Mineral Riches in Afghanistan The previously unknown deposits — including huge veins of iron, copper, cobalt, gold and critical industrial metals like — are so big and include so many minerals that are essential to modern industry that Afghanistan could eventually be transformed into one of the most important mining centers in the world, the United States officials believe. An internal Pentagon memo, for example, states that Afghanistan could become the “Saudi Arabia of lithium,” a key raw material in the manufacture of batteries for laptops and BlackBerrys. The vast scale of Afghanistan’s mineral wealth was discovered by a small team of Pentagon officials and American geologists. The Afghan government and President were recently briefed, American officials said. “There is stunning potential here,” Gen. , commander of the United States Central Command, said in an interview on Saturday. “There are a lot of ifs, of course, but I think potentially it is hugely significant.”

Collecting Rocks by Rachel M. Barker Rocks Tell the Story of the Earth The Earth is made of rock, from the tallest mountains to the floor of the deepest ocean. Leonid Meteor Shower 2013: How To See 'Shooting Stars' This Weekend Get ready to see some "shooting stars" this weekend, skywatchers. The 2013 Leonid meteor shower is expected to be visible from Nov. 16 through Nov. 18. Weather permitting, observers around the world should be able to see the brightest "Leonids" streak across the sky from Saturday night through Sunday morning. The Northern Hemisphere will be treated to the prime show, as it has the best view of the constellation Leo, from which the meteor shower derives its name. Unfortunately, this year's Leonid meteor shower will not be as visible as the show has been in the past years. Since the moon turns full on Nov. 17 -- in the midst of the shower -- only the brightest of the meteors will be apparent to most watchers.

Mineral Identification Minerals Minerals are defined as naturally occurring, inorganic, solids with a definite chemical composition and a regular, internal crystalline structure. The keys to this definition are the chemical composition and the crystalline structure. Different chemical compositions result in different minerals. The Life Cycle of a Mineral Deposit—A Teacher’s Guide for Hands-On Mineral Education Activities This teacher's guide defines what a mineral deposit is and how a mineral deposit is identified and measured, how the mineral resources are extracted, and how the mining site is reclaimed; how minerals and mineral resources are processed; and how we use mineral resources in our every day lives. Included are 10 activitybased learning exercises that educate students on basic geologic concepts; the processes of finding, identifying, and extracting the resources from a mineral deposit; and the uses of minerals. The guide is intended for K through 12 Earth science teachers and students and is designed to meet the National Science Content Standards as defined by the National Research Council (1996).

Here's All You Need To Know To View Comet ISON This December (ANIMATED INFOGRAPHIC) This new view of Comet C/2012 S1 (ISON) was taken with the TRAPPIST national telescope at ESO's La Silla Observatory on the morning of Friday 15 November 2013. Comet ISON was first spotted in our skies in September 2012, and will make its closest approach to the Sun in late November 2013.<a href=" target="_blank"> Waldemar Skorupa (Kahler Asten, Germany)</a>And anotherThe view from ItalyMaximilian Teodorescu"Taken by Kosmas Gazeas on November 18, 2013 @ University of Athens Observatory, Athens, Greece, remotely controlled from ...Netherlands!"<a href=" target="_blank">Michael Jäger of Ebenwaldhöhe, Austria</a>: "Whatever exploded from the comet's core also created a spectacularly-long tail, more than 16 million kilometers from end to end."<a href=" Kato</a>: "the comet after the outburst on November 14, 2013. North is up, and East is to the left."