Build your own Bamboo Domes 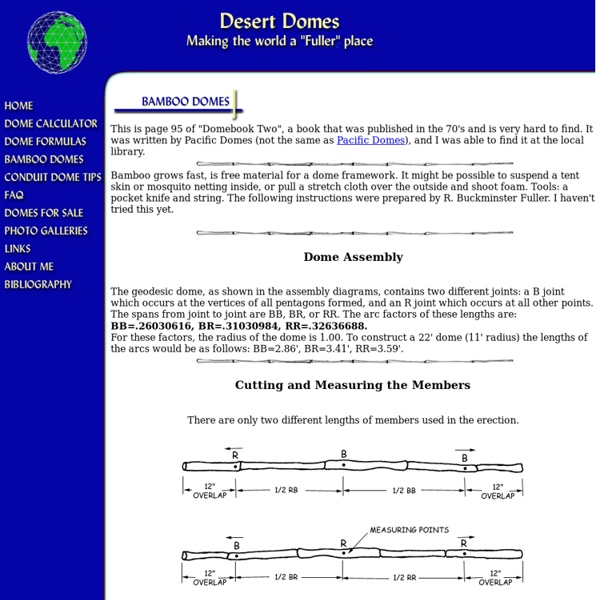 This is page 95 of "Domebook Two", a book that was published in the 70's and is very hard to find. It was written by Pacific Domes (not the same as Pacific Domes), and I was able to find it at the local library. Bamboo grows fast, is free material for a dome framework. It might be possible to suspend a tent skin or mosquito netting inside, or pull a stretch cloth over the outside and shoot foam. Dome Assembly The geodesic dome, as shown in the assembly diagrams, contains two different joints: a B joint which occurs at the vertices of all pentagons formed, and an R joint which occurs at all other points. Cutting and Measuring the Members There are only two different lengths of members used in the erection. For a 5/8 dome, 80 B members and 90 R members are required. A line of color can be drawn around the bamboo members at each measuring point. Cross Assembly With 12" extra on the end of each stick, there'll be a 24" overlap when the crosses are assembled. Cross Tying Stage 1 Assembly Prop It

Pacific Domes International - Geodesic Domes Genuine Rocky Architecture in Switzerland: The Chamoson Residence Salvaging the best features of a traditional 1800s house, Savioz Fabrizzi Architecte envisioned a contemporary residence in Chamoson, Switzerland. The genuine rocky surface makes the project perfectly blend in the natural surroundings. According to the architects, “the renovation seeks to maintain and reinforce this character, emphasizing the existing stone structure while using concrete for the parts to be replaced, in order to create a completely mineral feel to the whole”. Insulating concrete was added to the existing structure, in order to reinforce it. Sustainable feature are also present in the design: “23 m² of solar panels on the roof produce about 35% of the annual heating requirement (heating and hot water). In harmony with the exterior, the interior is formed from unrefined mineral materials, with its natural stone, exposed concrete and polished screed floors”.

The Core Home CONSTRUCTEUR ARCHITECTE DU FUTUR AVEC UNE MAISON AVANTGARDE OSSATURE METALLIQUE STEELDIS "Maison Avantgarde®" Référencement Page 1Référencement Google Vivos - Underground Shelter Network for Surviving 2012 and Beyond Earth House by BCHO Architects BCHO Architects have completed this house buried in the ground in Seoul, Korea. Called Earth House, the project was built to honour the late Korean poet Yoon Dong-joo. The concrete-lined residence has two courtyards with earth floors, to which all rooms are connected. Rammed-earth walls make use of the excavated earth while wood from a pine tree from the site is embedded in the concrete courtyard walls. Photographs are by Wooseop Hwang. Here's some more information from BCHO Architects: Earth House – BCHO Architects Earth House is a house of the sky. It is a house which focuses on the primal relationship between nature and humans. The 14m x 17m concrete box is buried in the ground and contains 6, 1-pyeong, rooms and two earth filled courtyards. The one pyeong rooms originated from the size of one kan (6x6 ja; 1 ja = approx. 30cm) which are just large enough for an adult to lie down straight. Connecting rooms can be joined to create a bigger room. See also:

Underground Home Design: How to Build & Bury a House Living underground sounds disturbing – cavernous designs, claustrophobic images of cramped quarters and fuzzy pictures with low light levels come quickly to mind. A well-planned underground home, however, can be designed precisely around these problems to have all of the advantages of a cozy and private above-ground house as well as the sustainable and structural benefits of an fully-enclosed living space – entirely under the surface of the Earth. William Lishman sums up the design advantages nicely: “Why build underground? There are many advantages to earth integrated architecture. With the earth as insulation, heating and cooling energy requirements are significantly reduced, especially in windy areas. Lishman has lived in his own incredible underground home design for decades now with the pictures to prove it. His eco-friendly earth home consists of a framework of steel trusses covered in spray-on concrete and covered with tar and a layer of plastic for water protection.