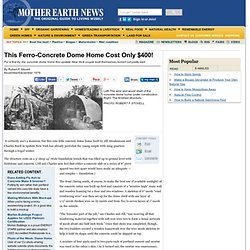 The structure rests on a 3'-deep 14"-wide foundation trench that was filled up to ground level with fieldstone and concrete. (Jill and Charles now feel that either a concrete slab or a series of 8" piers spaced two feet apart would have made an adequate — and simpler — foundation.) The front (facing south, of course, to make the best use of available sunlight) of the concrete cabin was built up first and consists of a "window high" stone wall and wooden framing for a door and two windows. A skeleton of 6"-mesh "road reinforcing wire" was then set up for the dome itself with one layer of 1/2"-mesh chicken wire on its inside and from five to seven layers of 1"-mesh on the outside.

Yes, the dome did leak … until Charles and Jill gave it two good coats of wall tar. Peter's Concrete Block Dome. Peter Roberts has been building a unique dome structure in the woods and is sharing it with us. 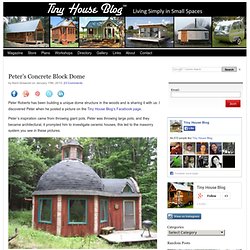 I discovered Peter when he posted a picture on the Tiny House Blog’s Facebook page. Peter’s inspiration came from throwing giant pots. Peter was throwing large pots, and they became architectural, it prompted him to investigate ceramic houses, this led to the masonry system you see in these pictures. Peter graduated from the NYS College of Ceramics at Alfred University with a degree in Masonry Science. Peter combined his experiences in Fine Art and Ceramic Engineering. Peter has also worked with the Vocational School of Masonry at Alfred State College, located in Wellsville, NY. These are some details of a masonry cupola Peter is building atop a concrete block dome.

Here’s an interior view of the block dome, with cupola being built in center. Interior view of one of the domes. These domes are in the forest, and Peter get lots of wildlife. Why build a concrete dome? The concrete dome is similar in shape and structure to an egg which has always been a fascination. 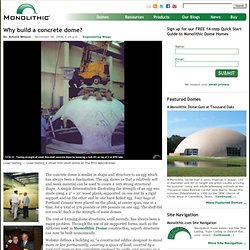 The egg shows us that a relatively soft and weak material can be used to create a very strong structural shape. A simple demonstration illustrating the strength of an egg was made using a 2′ × 10′ wood plank, supported on one end by a rigid support and on the other end by one hard boiled egg. Four bags of Portland Cement were placed on the plank, at center span, one at a time, for a total of 376 pounds or 188 pounds on one egg. The shell did not crack! Such is the strength of some domes. The cost of forming dome structures, until recently, has always been a major problem. Webster defines a building as, “a constructed edifice designed to stand more or less permanently, covering a space of land, covered by a roof and more or less completely enclosed by walls, and serving as a dwelling, storehouse, factory, shelter for animals, or other useful structure.” 1. 2. 3.