Here's What It Would Look Like If Romeo And Juliet Had Instagram. S Interactive Dating Series “Relationshipped" Returns To Facebook Watch For Season Two. INMA: 6 key training points for a digital, data-savvy newsroom. The generation now retiring from newsrooms can remember the days when a university degree was not required to become a reporter and thrive in journalism. 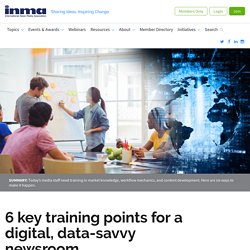 They remember typewriters and telecopiers and page composition that relied on X-Acto knives and tubs of wax. In the old days, newcomers to newsrooms learned by doing. The biggest tech trends of 2019. Open journalism - a different kind of newsroom. By 2019, 80% of the World's Internet Traffic Will Be Video. Video content accounted for an impressive 64% of all the world’s internet traffic in 2014, but even with all the ALS challenges, and cat videos that year brought us, we are due an explosion in consumption over the next 4 years. 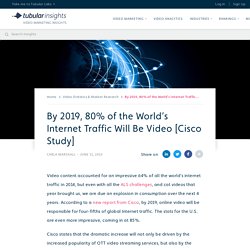 According to a new report from Cisco, by 2019, online video will be responsible for four-fifths of global Internet traffic. The stats for the U.S. are even more impressive, coming in at 85%. Cisco states that the dramatic increase will not only be driven by the increased popularity of OTT video streaming services, but also by the sheer number of us that will be connected by 2019. Over half the planet (around 3.9 billion people) will have access to the Internet by that time, but the number of devices able to access the web will be three times as high as the global population!

10 essential media stats from September 2018. This is the second in our new monthly series offering the most important data and research about the media and communications industries. 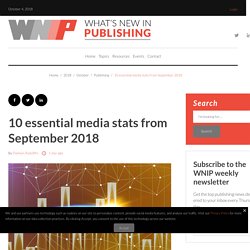 Here’s 10 key numbers from the past month which caught our eye: 1. U.S. adults spend over 11 hours a day connected to media The Nielsen Total Audience Report for Q1 2018 provided a detailed insight into US media habits across digital as well as linear (television and radio) platforms. 9 Social Media Trends to Pay Attention to in 2018 – The Startup. From new features, consumer preferences to different brand opportunities, there are a lot to look forward this year that will help every marketer develop a unicorn (solid) strategy to refine their marketing plans. 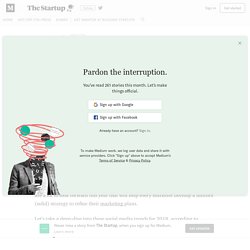 Let’s take a deep-dive into these social media trends for 2018, according to Filmora, to see how you can get a leg up and use them to your business’ advantage. 1. Videos. S Use of Your Data. How Reuters made a free personalised 'news wire' with app based on 5,000 niche topics. Reuters has switched its consumer strategy away from general news audiences to target professionals with a highly personalised news app designed to inform rapid business decision-making. 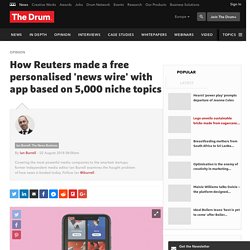 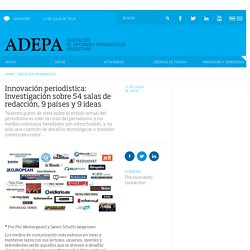 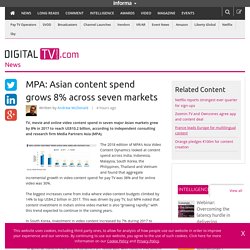 The 2018 edition of MPA’s Asia Video Content Dynamics looked at content spend across India, Indonesia, Malaysia, South Korea, the Philippines, Thailand and Vietnam and found that aggregate incremental growth in video content spend for pay TV was 38% and for online video was 30%. The biggest increases came from India where video content budgets climbed by 14% to top US$4.2 billion in 2017. This was driven by pay TV, but MPA noted that content investment in India’s online video market is also “growing rapidly,” with this trend expected to continue in the coming years. In South Korea, investment in video content increased by 7% during 2017 to approach US$3.0 billion. “In general, content investment dynamics are favourable with content investment growing,” said MPA vice president, Stephen Laslocky.

Friend and Foe: The Platform Press at the Heart of Journalism. Quartz sold by Atlantic Media to Uzabase of Japan. Quartz is being bought by a Tokyo-based media company seeking to expand its global footprint. 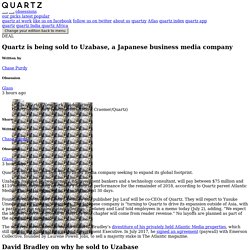 Uzabase, founded by two former UBS investment bankers and a technology consultant, will pay between $75 million and $110 million, depending on Quartz’s financial performance for the remainder of 2018, according to Quartz parent Atlantic Media. The deal is expected to close in the next 30 days. It's a Connected World, and That's a Boon for TV Viewers. Over the past 15+ years, the number of consumer devices and services consumers have access to and ultimately use has grown exponentially, with some becoming a must have while others falling out of favor, replaced by nascent technology. 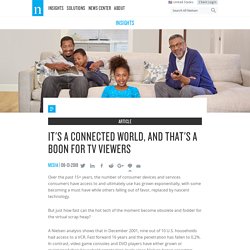 But just how fast can the hot tech of the moment become obsolete and fodder for the virtual scrap heap? A Nielsen analysis shows that in December 2001, nine out of 10 U.S. households had access to a VCR. Fast forward 16 years and the penetration has fallen to 0.2%. In contrast, video game consoles and DVD players have either grown or maintained their household penetration levels since Nielsen began reporting them in the early 2000s. Meanwhile, other consumer devices and services introduced within the last decade have quickly gained wide acceptance by consumers: smartphones (89%), personal computers (79%), tablets (63%) and subscription video on-demand (SVOD) 62%. 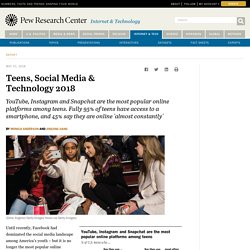 Fully 95% of teens have access to a smartphone, and 45% say they are online 'almost constantly' Until recently, Facebook had dominated the social media landscape among America’s youth – but it is no longer the most popular online platform among teens, according to a new Pew Research Center survey. Today, roughly half (51%) of U.S. teens ages 13 to 17 say they use Facebook, notably lower than the shares who use YouTube, Instagram or Snapchat. Internet Trends Report 2018.

La no ficción más innovadora no es necesariamente tecnológica – Español. Will newspapers disappear in the future? By Douglas McLennan and Jack Miles By Douglas McLennan and Jack Miles The WorldPost Opinion Opinion A column or article in the Opinions section (in print, this is known as the Editorial Pages). March 21. SXSW 2018: news, films, panels, and activations from Austin, Texas’ multimedia festival.

IAB Digital Video Advertising Guide. Advanced Linear TV Planning and Targeting Strategies There’s a lot of talk about audience-based buying, selling, and targeting. Advertisers are looking for the right audiences, and audiences are considerably more complex than merely accounting for demographics and age. Audiences are comprised of people with specific interests and passions, behaviors and preferences. To target these more specific attributes, enhanced audience data such as MRI Fusion data, Nielsen Catalina data, are used as well as other data types (including client first-party CRM data).

While there’s no perfect dataset that can be used to identify and target audiences, everyone wants to move beyond age and gender in media buying. IAB Digital Video Advertising Guide. Inside X, Google’s Moonshot Factory - The Atlantic. I. The Question A snake-robot designer, a balloon scientist, a liquid-crystals technologist, an extradimensional physicist, a psychology geek, an electronic-materials wrangler, and a journalist walk into a room. The journalist turns to the assembled crowd and asks: Should we build houses on the ocean? To hear more feature stories, see our full list or get the Audm iPhone app.

PlayGround: “Era of information? This is the era of emotion.” The scariest chart in Mary Meeker’s slide deck for newspapers has gotten even a smidge scarier. Why The Times? International Symposium of Online Journalism 2017 (with images, tweets) · dialalluna. Product management is the new journalism. Usar el benchmarking para fortalecer la imagen corporativa. A Boston Globe memo puts the spotlight on an emerging consensus on how to transform metro papers. VidCon Europe 2017: 15 Takeaways for the Online Video Industry. Attach?broker=mediatel&token=54d4dbb27b008afe488be081de022cb5a031da87&checksum=30edda9c1beac9fc754bb40daf240e67804255bc&redirect= 10 cualidades de un director de comunicación con futuro. Log In - New York Times. Reinventing the way stories are told. A lookback at 2016 in the world of Video Streaming. - Muvi. This is The New York Times’ digital path forward. Journalism That Stands Apart - The New York Times. Log In - New York Times.