WebQuests - Tools for Differentiation.pdf. 70 Educational Activities for When You're Stuck Indoors. If you’re stuck indoors for whatever reason, try these educational activities to crack boredom. 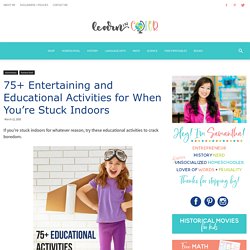 Grab the free printable bingo card here! 75+ Educational Activities for When You’re Stuck Indoors 1. Watch historical movies (check out my lists for kids and teens) 2. 3. 4. 5. 6. 7. 8. 9. 10. 11. The Most Powerful Way to Remember What You Study. Campaigner Personality (ENFP-A / ENFP-T) It doesn’t interest me what you do for a living. 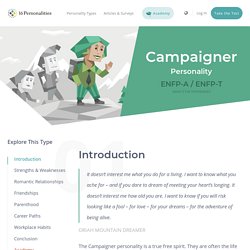 I want to know what you ache for – and if you dare to dream of meeting your heart’s longing. It doesn’t interest me how old you are. I want to know if you will risk looking like a fool – for love – for your dreams – for the adventure of being alive. The Campaigner personality is a true free spirit. They are often the life of the party, but unlike types in the Explorer Role group, Campaigners are less interested in the sheer excitement and pleasure of the moment than they are in enjoying the social and emotional connections they make with others. You Can Change the World With Just an Idea More than just sociable people-pleasers though, Campaigners, like all their Diplomat cousins, are shaped by their Intuitive (N) quality, allowing them to read between the lines with curiosity and energy.

Campaigners are fiercely independent, and much more than stability and security, they crave creativity and freedom. Logos, Social Media, Web Design, Marketing & Branding. (407) 559-5111. How to Make Hot Cocoa Bombs the 3 Winks Way - 3 Winks Design. The VARK Modalities. The acronym VARK stands for Visual, Aural, Read/write, and Kinesthetic sensory modalities that are used for learning information. 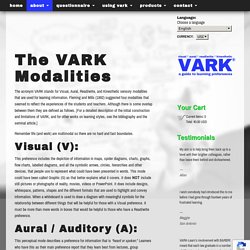 Fleming and Mills (1992) suggested four modalities that seemed to reflect the experiences of the students and teachers. Although there is some overlap between them they are defined as follows. [For a detailed description of the initial construction and limitations of VARK, and for other works on learning styles, see the bibliography and the seminal article.] Remember life (and work) are multimodal so there are no hard and fast boundaries. Visual (V): This preference includes the depiction of information in maps, spider diagrams, charts, graphs, flow charts, labelled diagrams, and all the symbolic arrows, circles, hierarchies and other devices, that people use to represent what could have been presented in words. Aural / Auditory (A): This perceptual mode describes a preference for information that is “heard or spoken.” Read/write (R): Kinesthetic (K): Lawton Chiles Middle School > Staff > QuickLinks > Faculty. End of audiobook snobbery as scientists find reading and listening activates the same parts of the brain

Pin on games. Picture Books for High School (They're Not in Kindergarten Any More!) Curious. A look at one of the U.S.A.'s most controversial presidents. 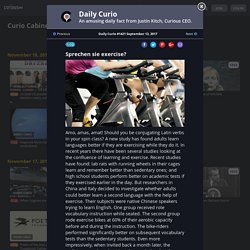 When a government official must publicly declare that they aren't a criminal, it's usually a bad sign. But Richard Milhous Nixon, the 37th President of the United States, did just that on November 17, 1973, during a now-infamous speech. The address came on the heels of a government wiretapping scandal which had cemented Nixon's place as an extremely controversial President. On August 9, 1974, Nixon became the first and only U.S.

Born January 9, 1913, Nixon started making waves early in his career. Nixon gained a seat in the U.S. Nixon first ran for President himself in 1960, but lost to Democratic opponent John F. According to the source, Nixon's administration had burglarized and wiretapped the Democratic Party National Headquarters at the Watergate complex in Washington, D.C., during his re-election campaign. Below: footage of Nixon's "I am not a crook" speech. Image credit & copyright: Anonymous/AP. Kombucha 101: Demystifying The Past, Present And Future Of The Fermented Tea Drink. Once dubbed the most liberal product in America in 2009, kombucha is experiencing a surge of sales and quickly becoming an influential player in the domestic beverage economy. 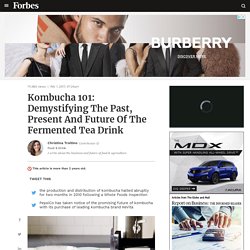 The misunderstood ancient fermented beverage has a complicated history in terms of media perception, alcoholic regulation and availability of human-based medical studies. However, big business is taking note of the developing consumer preferences for the functional beverage and its noted health benefits. So how did this ancient Chinese beverage that is brewed with an unappetizing yeast disc become an artisanal beverage and an influential part of PepsiCo's brand portfolio in 2016?

How was it possible that an alcohol regulation scandal in 2010 inversely generated huge consumer interest for the product? To understand its current state and growing market potential, a critical lens should be given to the drink's long history and its surprising informative pivots.