Essas 25 ilusões pintadas por Rob Gonsalves vão dar um nó em seu cérebro. Device Free Dinner. Www.adweek. Lego makes some of the most delightful advertising around, and this series of print ads from Ogilvy Bangkok are just about perfect, from concept to execution. 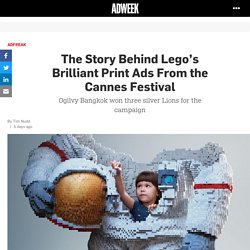 The work, which won three silver Lions (in Print & Publishing and Outdoor) and a bronze (in Design) at the Cannes festival last month, shows kids literally envisioning their future careers by building them from the inside with Legos. The tagline: “Build the future.” See the ads below, and our chat with Ogilvy Bangkok below that. “Lego’s ultimate purpose is to inspire and develop children to think creatively, reason systematically and release their potential to shape their own future. The brand believes that play is a key element in children’s growth and development. “To communicate the brand belief, we created this ad series to visualize the idea to consumers.

The agency called on Illusion in Bangkok to create the pieces using 3-D illustration. One-by-One Teachers Interrupt Back-to-School Speech with Les Misérables Parody. L'arrogance de l'ignorance. Apple Confidential - Steve Jobs on "Think Different" - Internal Meeting Sept. 23, 1997. 23 Photos That Will Make Anyone Who Works In IT Satisfied. Randy Pausch's Last Lecture. The One Formula To Find Your Passion In Life. Talks to watch when you don't know what to do with your life. 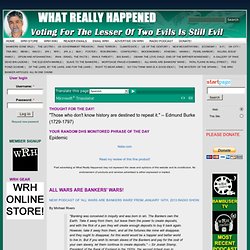 " -- Edmund Burke (1729-1797) Epidemic Paid advertising at What Really Happened may not represent the views and opinions of this website and its contributors. No endorsement of products and services advertised is either expressed or implied. By Michael Rivero "Banking was conceived in iniquity and was born in sin. I know many people have a great deal of difficulty comprehending just how many wars are started for no other purpose than to force private central banks onto nations, so let me share a few examples, so that you understand why the US Government is mired in so many wars against so many foreign nations. The United States fought the American Revolution primarily over King George III's Currency act, which forced the colonists to conduct their business only using printed bank notes borrowed from the Bank of England at interest. 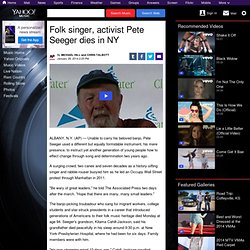 (AP) — Unable to carry his beloved banjo, Pete Seeger used a different but equally formidable instrument, his mere presence, to instruct yet another generation of young people how to effect change through song and determination two years ago. A surging crowd, two canes and seven decades as a history-sifting singer and rabble-rouser buoyed him as he led an Occupy Wall Street protest through Manhattan in 2011. "Be wary of great leaders," he told The Associated Press two days after the march.

"Hope that there are many, many small leaders. " The banjo-picking troubadour who sang for migrant workers, college students and star-struck presidents in a career that introduced generations of Americans to their folk music heritage died Monday at age 94. "He was chopping wood 10 days ago," Cahill-Jackson recalled. View gallery File-This Sept. 21, 2013, file photo shows Pete Seeger performing on stage during the Farm Aid 2013 … That was a message Seeger spread his entire life. Seven Signs You're Wasting Your Talent. 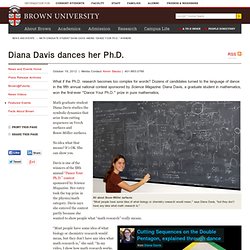 Dozens of candidates turned to the language of dance in the fifth annual national contest sponsored by Science Magazine. Diana Davis, a graduate student in mathematics, won the first-ever “Dance Your Ph.D.” prize in pure mathematics. All about Bouw-Möller surfaces“Most people have some idea of what biology or chemistry research would mean,” says Diana Davis, “but they don’t have any idea what math research is.”Math graduate student Diana Davis studies the symbolic dynamics that arise from cutting sequences on Veech surfaces and Bouw-Möller surfaces. No idea what that means? It’s OK. Davis is one of the winners of the fifth annual “Dance Your Ph.D.” contest sponsored by Science Magazine.