After Ever After - DISNEY Parody. BBC Learning English - 6 Minute English / What's in a fairy tale? If Cinderella were a guy... THE TRUE STORY OF THE THREE LITTLE PIGS. Read & Listen The Three Little Pigs Fairy Tale for Children's. Click to listen to this story English Traditional Once upon a time there were three little pigs. 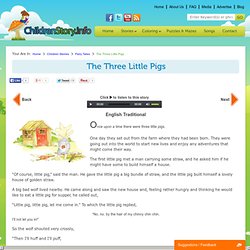 One day they set out from the farm where they had been born. They were going out into the world to start new lives and enjoy any adventures that might come their way. The three little pigs on the web - Page 1. DISNEY PRINCESS - Cinderella's Story - SUBSCRIBE. The Three Little Pigs by Roald Dahl - Famous poems, famous poets. - All Poetry. The Three Little Pigs Story Book Video. Roald DAHL - Revolting Rhymes - Three Little Pigs. THE TRUE STORY OF THE THREE LITTLE PIGS COMMON CORE LISTENING. This set of language arts activities is based on the the popular story "The True Story of the Three Little Pigs" written by John Scieszka. 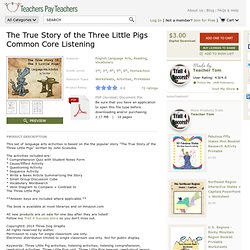 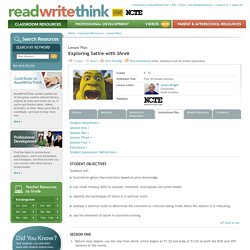 If you've got lessons plans, videos, activities, or other ideas you'd like to contribute, we'd love to hear from you. More Find the latest in professional publications, learn new techniques and strategies, and find out how you can connect with other literacy professionals. More Teacher Resources by Grade Your students can save their work with Student Interactives. More Home › Classroom Resources › Lesson Plans Lesson Plan Student Objectives Session One Session Two Session Three Session Four Extensions Student Assessment/Reflections Students will brainstorm genre characteristics based on prior knowledge. use visual literacy skills to analyze, interpret, and explain non-print media. identify the techniques of satire in a satirical work. analyze a satirical work to determine the comment or criticism being made about the subject it is ridiculing. use the elements of satire in narrative writing.

The Ultimate List of Young Adult Fairy Tale Retellings. I. 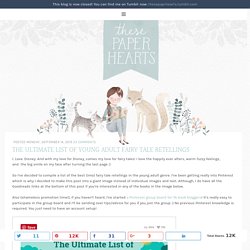 Love. Disney. And with my love for Disney, comes my love for fairy tales! I love the happily ever afters, warm fuzzy feelings, and the big smile on my face after turning the last page :) So I’ve decided to compile a list of the best (imo) fairy tale retellings in the young adult genre. Also (shameless promotion time!) SaveThese Paper HeartsThe Ultimate Book List of Young Adult Fairy Tale Retellings. Cinderella Sleeping Beauty. Ten YA Retellings of Snow White. You know that romantic tale of a young woman who runs away to the woods to escape a wicked Queen. 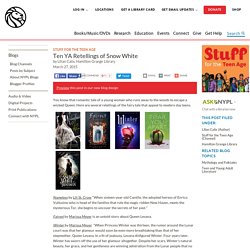 Here are several retellings of the fairy tale that appeal to modern day teens. The movie Sydney White is the story of a tomboy named who is kicked out of the best sorority in her college campus by the popular girls. Sydney ends up moving in with seven guys who help her stand up for the outcast and regain her spot in the best sorority on campus. The film Mirror Mirror tells the story of an exiled princess who with the help of seven rebels fights the regain the throne. Fairest by Gail Carson Levine. Beauty And The Beast As Told By Emoji. The True Story of the Three Little Pigs - Lessons for teachers. Lesson Ideas to Match the book, The True Story of the 3 Little Pigs! 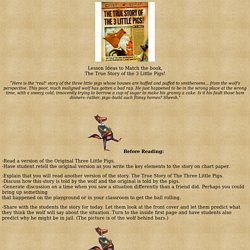 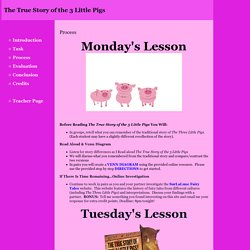 (Each student may have a slightly different recollection of the story). Read Aloud & Venn Diagram. &apos;Once Upon a Time&apos; review: Fractured fairy tale has potential, but no happy ending yet – Screener. The 2011-12 season has thus far not been a great one for new drama. 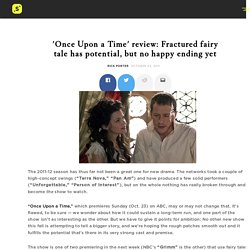 Revolting Rhymes_ Snow White and the Seven Dwarfs.mp4. Writing. Letters / Postcards : Stephen Fry: the letter that saved my life - video "Stephen Fry explains how a few short words turned his life around as a troubled teenager, and imagines the fantasy letter he would send to Oscar Wilde to rescue him from the shame and despair that blighted his final years.. 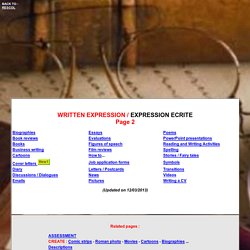 Short Stories and Fairy Tales. Collected by Sofas And Sectionals. List of fairy tales - Wikipedia. Fairy tales are stories that range from those originating in folklore to more modern stories defined as literary fairy tales. 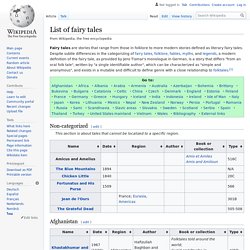 Despite subtle differences in the categorizing of fairy tales, folklore, fables, myths, and legends, a modern definition of the fairy tale, as provided by Jens Tismar's monologue in German, is a story that differs "from an oral folk tale", written by "a single identifiable author", which can be characterised as "simple and anonymous", and exists in a mutable and difficult to define genre with a close relationship to folktales.[1] See also[edit] References[edit] ^ Zipes, xv^ Dixon Hardy, Phillip. (1837).Legends, Tales, and Stories of Ireland Dublin: P.J. John Cumming, Retrieved from Harvard University Library via Archive.org 23 November 2017 Croker, Thomas Crofton (1828). Zipes, Jack. (2000). Grimms' Fairy Tales.

Fairy tale origins thousands of years old, researchers say. Image copyright PA Fairy tales like Beauty and the Beast can be traced back thousands of years, according to researchers at universities in Durham and Lisbon. Using techniques normally employed by biologists, academics studied links between stories from around the world and found some had prehistoric roots. They found some tales were older than the earliest literary records, with one dating back to the Bronze Age. The stories had been thought to date back to the 16th and 17th Centuries. Durham University anthropologist Dr Jamie Tehrani, said Jack and the Beanstalk was rooted in a group of stories classified as The Boy Who Stole Ogre's Treasure, and could be traced back to when Eastern and Western Indo-European languages split more than 5,000 years ago. Analysis showed Beauty And The Beast and Rumpelstiltskin to be about 4,000 years old.

" PLOT : "Queen Elanor once wished that she only had a daughter as white as the snow, as red as the blood and as strong and defiant like the rose she found, still blooming in the snow. And then she gave birth to Snow White, who became the Princess of Kingdom Tabor and daughter of King Magnus. Official website (snowwhiteandthehuntsman.com) Stories for Kids - Activities. Fractured Fairy Tales: Little Red Riding Hood. Picked by Meagan Albright You think you know the story of Little Red Riding Hood, but did you know she rode a bicycle to her grandmother’s house? Or that the big bad wolf was really a big, bad… alligator?! Check out these fractured fairly tales — alternate versions of your favorite folktales — plus one traditional tale, and discover a whole new story! Revolting Rhymes_ Cinderella.mp4. Little Red Riding Hood - Revolting Rhymes: Part 1 Preview - BBC One. Revolting Rhymes: Trailer - BBC One.