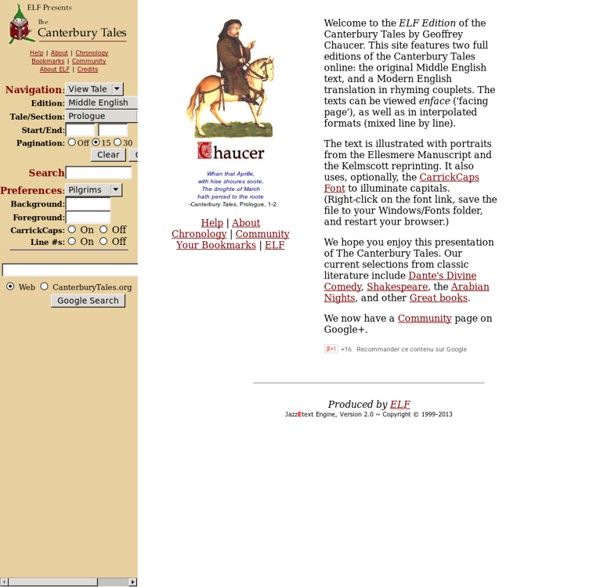 Geoffrey Chaucer (c.1343-1400) Welcome to the Luminarium Chaucer page. Here you will find a Chaucer Biography, Chaucer's Works, Quotes, Essays and Articles, as well as links to study resources and a list of books helpful for further study. All of these can be accessed from the red navigation bar at the top. The sidebar on the right has links to Medieval writers and works, historical persons and events, and concepts relevant to the study of Chaucer. And don't forget to visit the Chaucer Discussion Board to chat and ask any questions that may crop up. CDC reports 11 cases of human plague since April The average number of cases between 2001 and 2012 was seven, with less than one death each year. "We don't want people to panic but we do want people to be aware of the heightened risk," said Dr. Natalie Kwit, a veterinarian with the division of vector borne diseases at the CDC. How do we still have the plague, centuries after the Black Death? The cases, which are required to be reported to the CDC, have been reported in six states. Experts raise alarm as plague kills dozens in Madagascar The youngest of the patients is 14 and the oldest is 79. Plague occurs in rural and semi-rural areas of the Western United States, most commonly in New Mexico, Arizona and Colorado. The bacteria that causes the plague, Yersinia pestis, is naturally occurring in the environment and is found in areas where there are wild rodents. People are usually infected after a flea becomes infected from a rodent such as a rat, squirrel or chipmunk, and then transmits it to a person by biting them.

Early Modern Resources Article: The General Prologue to the Canterbury Tales The General Prologue The most popular part of the Canterbury Tales is the General Prologue, which has long been admired for the lively, individualized portraits it offers. More recent criticism has reacted against this approach, claiming that the portraits are indicative of social types, part of a tradition of social satire, "estates satire", and insisting that they should not be read as individualized character portraits like those in a novel. Yet it is sure that Chaucer's capacity of human sympathy, like Shakespeare's, enabled him to go beyond the conventions of his time and create images of individualized human subjects that have been found not merely credible but endearing in every period from his own until now. It is the General Prologue that serves to establish firmly the framework for the entire story-collection: the pilgrimage that risks being turned into a tale-telling competition. The title "General Prologue" is a modern invention, although a few manuscripts call it prologus.

The Knight in The Canterbury Tales: General Prologue & Frame Story Character Analysis Look up in the sky! It's a bird…it's a plane…it's SUPER KNIGHT! Seriously, this guy is one perfect knight. If there's been a battle in the past twenty years, chances are good he was there. In all of Christendom and Heathendom, there's no man who's ridden farther. But not only is the Knight a stellar battlefield athlete, he's also a genuinely nice guy. Unlike with some of the other characters, we can be sure that this knight is exactly what Chaucer says he is. In The Canterbury Tales, the Knight is a representative of those who belong to the very high social class of the nobility. The Knight Timeline

The Canterbury Tales Looking back, it’s difficult to remember just when the idea came to create The Canterbury Tales, but it must have been around 1387. The work was never finished, but what was written amounted to about 17,000 lines, written for the most part in heroic couplets. In The Canterbury Tales, a party of twenty-nine pilgrims gathers at the Tabard Inn in Southwark in preparation for their pilgrimage to the shrine of Thomas Becket in Canterbury. The host of the inn proposes to go along on the pilgrimage as guide, and as a way to pass the time he suggests that the pilgrims each tell two stories on the way out and on the way back. This is a portrait (from a woodcut published by the Chaucer Society (Original Series, 71) of the Wife of Bath. The work of The Canterbury Tales begins with a General Prologue, which is what in medieval terms is called an “estates satire.” This is a portrait of the Manciple. Now, who would be the audience for such a work?

Oscar Wilde online | The Works and Life of Oscar Wilde