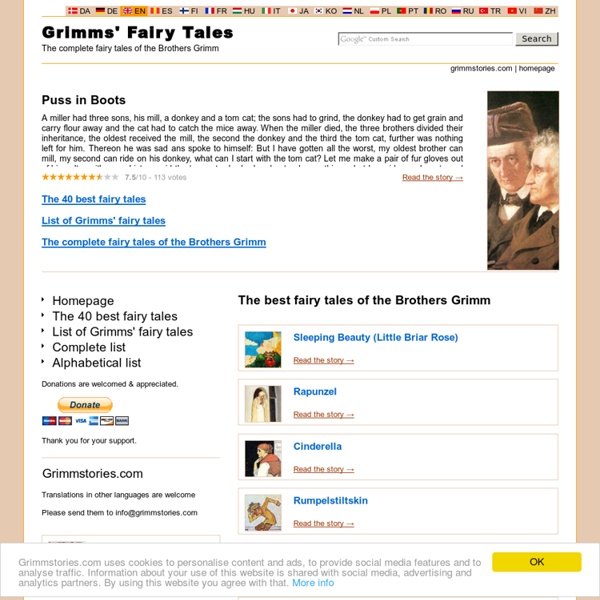 List of fairy tales - Wikipedia Fairy tales are stories that range from those originating in folklore to more modern stories defined as literary fairy tales. Despite subtle differences in the categorizing of fairy tales, folklore, fables, myths, and legends, a modern definition of the fairy tale, as provided by Jens Tismar's monologue in German, is a story that differs "from an oral folk tale", written by "a single identifiable author", which can be characterised as "simple and anonymous", and exists in a mutable and difficult to define genre with a close relationship to folktales.[1] See also[edit] References[edit] ^ Zipes, xv^ Dixon Hardy, Phillip. (1837).Legends, Tales, and Stories of Ireland Dublin: P.J. John Cumming, Retrieved from Harvard University Library via Archive.org 23 November 2017 Croker, Thomas Crofton (1828). Zipes, Jack. (2000).

Legends Liesl Shurtliff website + book trailer Fairy tale origins thousands of years old, researchers say Image copyright PA Fairy tales like Beauty and the Beast can be traced back thousands of years, according to researchers at universities in Durham and Lisbon. Using techniques normally employed by biologists, academics studied links between stories from around the world and found some had prehistoric roots. They found some tales were older than the earliest literary records, with one dating back to the Bronze Age. The stories had been thought to date back to the 16th and 17th Centuries. Durham University anthropologist Dr Jamie Tehrani, said Jack and the Beanstalk was rooted in a group of stories classified as The Boy Who Stole Ogre's Treasure, and could be traced back to when Eastern and Western Indo-European languages split more than 5,000 years ago. Analysis showed Beauty And The Beast and Rumpelstiltskin to be about 4,000 years old. Once upon a time... A blacksmith strikes a deal with a malevolent supernatural being, such as the Devil, Death or a genie. 'Pretty remarkable' 'Biology toolkit'

Free Children's Books Downloads Snow White and the Huntsman - Film - Teaching Snow White and the Huntsman "is a 2012 UK-American fantasy and action film based on the German fairy tale "Snow White" compiled by the Brothers Grimm. The film is directed by Rupert Sanders and written by Evan Daugherty, John Lee Hancock, and Hossein Amini. The cast includes Kristen Stewart, Charlize Theron, Chris Hemsworth, Sam Claflin, and Bob Hoskins (in his final role before retiring from acting). The film received two Oscar nominations for Best Visual Effects andBest Costume Design at the 85th Academy Awards." PLOT : "Queen Elanor once wished that she only had a daughter as white as the snow, as red as the blood and as strong and defiant like the rose she found, still blooming in the snow. And then she gave birth to Snow White, who became the Princess of Kingdom Tabor and daughter of King Magnus. Official website (snowwhiteandthehuntsman.com) Snow White And The Huntsman Trailer Activity (busyteacher.org) Snow White and the Huntsman Trailer Word Search (busyteacher.org)

The Literary Maven: 13 Short Stories for Engaging Secondary Students & Teaching Literary Elements Don't let your literature anthology dictate the short stories you read with your middle school and high school students. There are so many wonderful short stories out there, many of which can be used to teach a variety of literary elements and paired with other texts. Here's 13 of my favorites.1. The Sniper by Liam O'Flaherty I’m always looking for texts that will draw in my reluctant male readers. This short story is one that I like to read just before the holidays because of its message about giving and thinking of others. “The Interlopers” is a short story that is sure to hook reluctant readers. 4. This is one of my absolute favorite short stories to dig into. Literary criticism can be a complex idea to introduce to students. This short story is full of imagery and symbolism, and also great for teaching the different types of conflict. “Geraldo No Name” is one vignette from The House on Mango Street by Sandra Cisneros. The idea behind this short story has always fascinated me. 12.

Fractured Fairy Tales: Little Red Riding Hood Picked by Meagan Albright You think you know the story of Little Red Riding Hood, but did you know she rode a bicycle to her grandmother’s house? Or that the big bad wolf was really a big, bad… alligator?! Fairy Tales, in General – WebEnglish.se Related Topics: Little Red Riding Hood, Sleeping Beauty, The Three Billy Goats Gruff, Cinderella Background This theme is different from the others in WebEnglish.se, as it mostly presents various fairy tale related materials to choose from and not a set of directly usable materials in order. There is both material on fairy tales in general and some of individual fairy tales that WebEnglish.se wishes to endorseWhat is a Fairlytale This page includes a list of characteristics of the genre (yr 6-7) Warm-up Fairy Tales A short e-book explaining what fairy tales are (yr 2-4)Reboot of Rapanzel A cartoonist smashes a sexist fairy tale trope in one hilarious swoop (yr 7-9) Songs Fairy Tales and Story Songs A playlist of songs telling the stories Vocabulary Fairytale/Fantasy Flashcards with sentences to print out and play withPictionary Pictures and names of the most famous fairytales (yr 3-8)Worksheets Several activities with fantasy vocabulary Lesson Plans Reading Listening Watching Writing Games Related

The True Story of the Three Little Pigs - Lessons for teachers Lesson Ideas to Match the book, The True Story of the 3 Little Pigs! "Here is the "real" story of the three little pigs whose houses are huffed and puffed to smithereens... from the wolf's perspective. This poor, much maligned wolf has gotten a bad rap. Before Reading: -Read a version of the Original Three Little Pigs. -Explain that you will read another version of the story. -Share with the students the story for today. After You Read: -Brainstorm with your class what more they would like to know about A. -Ask students what other fairytales they know and how they would change if they were told from another point of view. -What point of view do your students feel is correct - the pigs or the wolf's point of view? -Compare the two stories: brainstorm some things that happened in the Three Little Pigs story that did not happen in the True Story Writing Prompts: 1.Were the pigs good little pigs? 2.Was the wolf really a bad wolf? 3.Can you really believe a pig? A favorite from the same author:

Can Students ‘Go Deep’ With Digital Reading? Mark Pennington’s students often read on their laptops. Pennington, who’s a reading specialist in Elk Grove near Sacramento, Calif., sees a need to teach kids how to read digitally and stay engaged, and thinks that digital reading will eventually catch up to what kids can do reading print. When asked if his seventh-graders are more engaged when reading from digital readers or in print, he said it depends — motivation and environment play a big role. “Most of the digital reading that students ‘practice’ is at home on Instagram, chat lines, Facebook and texting,” he said. “Since students are choosing to read and respond in these mediums, and since students have considerable prior knowledge and expertise in the subject matter, their engagement/comprehension is high.” The trick to being a good reader, no matter the medium, is being an engaged reader, a fact that Pennington notes is well-supported by research. “There are real advantages to print,” he said. “It was so cumbersome,” he said.