I am the Condom Fairy 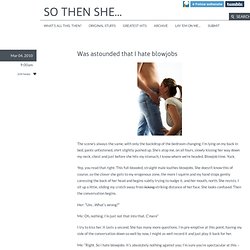 I’m lying on my back in bed, pants unfastened, shirt slightly pushed up. She’s atop me, on all fours, slowly kissing her way down my neck, chest and just before she hits my stomach, I know where we’re headed. Blowjob time. Yuck. Yep, you read that right. Her: “Um…What’s wrong?” Me: Oh, nothing. I try to kiss her. Me: “Right. Her: (stunned silence) 20 Things No One Ever Told You About Sex. Erogenous Zones - Turn on Man with Male Erogenous Zones. You know the usual places that turn your husband on, but when it comes to the most erogenous zones of his body, are you hitting the right places? 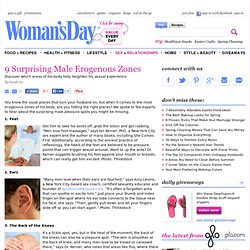 We spoke to the experts to hear about the surprising male pleasure spots you might be missing. 1. Feet Get him to take his socks off, grab the lotion and get rubbing. “Men love foot massages,” says Ian Kerner, PhD, a New York City sex expert and the author of many books, including She Comes First. 2. “Many men love when their ears are touched,” says Amy Levine, a New York City–based sex coach, certified sexuality educator and founder of IgniteYourPleasure.com. 3.

It’s a tickle spot, yes, but in the heat of the moment, the back of the knees can also be a pleasure spot. 4. Start at his belly button and work your hands south, suggests Dr. 5. Think of his inner thighs as the “gift wrapping to his package,” recommends Levine, who says that light touching in this zone can get him in the mood—fast. 6. 7. 8. 9. 50 Vintage STD Propaganda Posters. 50 Vintage STD Propaganda Posters by Mark Harris Wartime propaganda of the ’30s and ’40s didn’t stop at the physical enemy on the other side of the trenches. 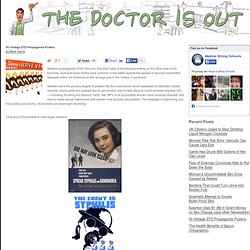 Guilt and scare tactics were common in the battle against the spread of sexually transmitted diseases within the American public at large and in the military in particular. Soldiers were the primary targets of posters like the ones below, which appealed to patriotism, family, morality, manly pride and outright fear to get enlisted men to take steps to avoid venereal disease (VD) — including throwing out dubious “facts” like “98% of all procurable women have venereal disease” that tried to make sexual intercourse with women look as scary as possible.