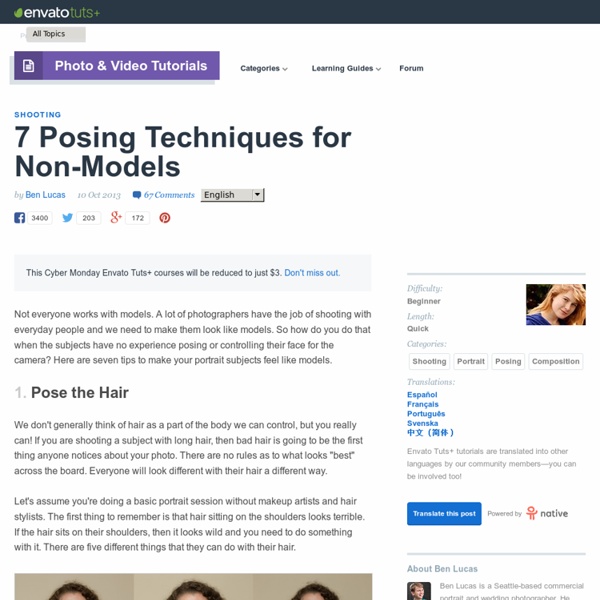 Not everyone works with models. A lot of photographers have the job of shooting with everyday people and we need to make them look like models. So how do you do that when the subjects have no experience posing or controlling their face for the camera? Here are seven tips to make your portrait subjects feel like models. We don't generally think of hair as a part of the body we can control, but you really can! Let's assume you're doing a basic portrait session without makeup artists and hair stylists. Hair all behind the shoulders.Hair all in front of the shouldersHair all on one side.Hair all on the other side.Hair up. Hair on the shoulders (#1) should be avoided at all costs. Generally you want their part facing the camera so more of their face is included. When someone stands in their normal relaxed stand, or even stands up straight to have nice posture, there is a little bit of flab right underneath their chin. Same before and after from the side. Same technique from a male subject.

How to Build a Realistic-Looking Beach Inside a Studio Swedish director Roy Andersson has built some impressive sets for his films, and for his latest work A Pigeon Sat on a Branch Reflecting on Existence — which recently won top prize at the 2014 Venice Film Festival — he built a very realistic-looking beach right on a sound stage: And here's the trailer of the film with the beach shot at the end: The set is very impressive, and while they did bring in a lot of sand, the solid structures underneath help sell this effect and probably make the set easier to work on. It may seem obvious when you see it, but the forced perspective, when done right, can convince you of just about anything. The buildings in the background are meticulously constructed and since the camera is at just the right angle (and does not move the entire shot), they feel like they are in the distance rather than being very small. The lighting is just right, though what also really helps this scene is the slight wind effect.

A Guide to Russian & Soviet / Former Soviet Cameras Germany has Leica, Zeiss, Voiglander and Rollei. Sweden has Hasselblad. Japan has Canon, Nikon, Pentax, Sony and Olympus. If you're a photographer, you know these brands. You probably own cameras and lenses made by one or more of these companies. In this tutorial, I'll present a brief history of Russian cameras, cover many of the major brands that are available, and talk about some of the great lenses that were made for these cameras! Republished Tutorial Every few weeks, we revisit some of our reader's favorite posts from throughout the history of the site. The following image was made with a Zorki 4K. First, let me say that “Russian" is a catch all term for a variety cameras that were produced in Russia and the USSR, and then in the former Soviet states after 1991 when the USSR collapsed. That being said, the vast majority of the Russian camera industry came into being after World War II. Initially I just wanted to get a rangefinder camera. The Moskva was a KMZ camera as well.

Here's a Look at How Much Post-Processing Goes Into a L'Oréal Beauty Commercial People can get really upset when you start using the P word. Magazine covers, professional portraits and even Instagram posts have been accused of using Photoshop. But nobody bats an eye when a beauty commercial comes on TV. Photos are manipulated, video, unless there’s CGI involved, is immune from such falsehoods right? Not really. The video condenses 30 minutes of Baselight color grading work done for a L’Oréal Garnier commercial down to just 3 minutes, and shows just how much work Brueckl does using some familiar looking tools. And that’s not even the full story. To be honest, I don’t show too much of the beauty retouching and skin grading. From a photography perspective, it’s fascinating to see how this is both very different and very similar to what one might do to a still photograph. (via PopPhoto)

7 Soothing Yoga Poses for Sleep - Organic Authority When you’re having trouble snoozing, you’ve got two options: one, keep tossing and turning (barf); or two, encourage yourself to sleep better with a round of soothing yoga poses for sleep. They’re the perfect way to calm your nerves, combat restlessness, and release any lingering tension. Ready to sleep better? Like, way better? 1. Stand with your feet about six inches apart and fold your torso toward the ground. 2. Sit down on your knees, making sure your big toes are touching and your knees are apart, almost as if your lower body’s forming a V. 3. Starting in easy pose, extend your right leg straight out in front of you and place the bottom of your left foot against your right thigh. 4. Sit down with one hip close to the wall. 5. Lie down on your back and move your arms out to the sides so your body forms a T. 6. Hug your knees into your chest and gently roll from side to side. [ like this ] 7. What tricks do you use to sleep better? Related on Organic Authority Image: allspice1

Best Largest Dubai Fashion Photo shooting Studio hire rental - Light House Studio, Dubai, UAE The Soviet Occupation of Afghanistan Soviet soldiers in Afghanistan After World War II, as both the United States and the Soviet Union competed for global power, Afghanistan increasingly turned to the Soviet Union for support after the United States established military ties with Pakistan in 1954, according to an October 2001 report from Human Rights Watch. The Soviets in return used the strategic location of Afghanistan, at the juncture of Asia and the Middle East, to counter the U.S. alliance with Pakistan and the surrounding Persian Gulf states. The Soviets entered Afghanistan in 1979 with the aim of establishing a key position in Asia, one with trade possibilities and access to Gulf oil, Barnett Rubin said in his book, “The Fragmentation of Afghanistan.” At the time, Afghanistan was a vulnerable monarchy. Soon after their entry into Afghanistan, the Soviets imposed military and social reforms that began to make enemies within different sectors of the indigenous population. The resistance was a success.

Inspire Me Interview #22} Sue Bryce | Leah Remillét Today I am thrilled to introduce you to the incredibly talented Sue Bryce of Sydney, Australia. I had the pleasure of hearing Sue speak at WPPI last year and her presentation was the absolute highlight of the entire convention for me! If you ever have a chance to hear her speak… Go to whatever lengths you must to make it happen! Sue is a stunning mix of confidence, whit, brains and drive. As Sue said to me, “We live and work in this incredible industry, it is fulfilling and challenging and rewarding and frightening all at the same time. The Interview… 1. 2. 3. 4. 5. Defined my Brand, my style, my pricelist and my product. 6. I do, I believe all the best photographers are Niche defined. 7. A glass of Red wine, a Sangiovese. 8. Thank you for saying I’m confident. 9. All species that ever existed learned to evolve or they die. 10. I’m always working. 11. I spend a huge chunk of my day on the computer. 12. Video first, capture footage then stop. 13. Movies, Books & fashion Magazines. 14.

4 big reasons you look fat in photographs. | The Haute Girl Update: You know how you read buzz feed or something like that and there is this really shocking title, but when you go to read it its nothing about what you thought it was going to be? and it ticks you off? Well this article is not like that, but the title is like that for a reason. It’s what brought you to read this today. So to give you a little background, I have been a professional photographer for 8 years. So as many of you know, if you have been following this blog, that this is my own journey to loving myself and finding a way to encourage other women to love their bodies through fashion. The funny part about that is, anyone can look photogenic or un-photogenic depending on who is taking the photo of them. This experiment with the blog has been an exciting revelation as to why I believed I couldn’t take good pictures ( in front of the camera.) So #1- Camera Distortion. The bottom one is often what we are dealing with. Lets start with whoever is taking your photo. Much love! Alea

How to Use Exposure Modes | Zonerama Magazine A camera’s built-in light meter measures the level of incident light and adjusts aperture, shutter speed, and ISO based on that. Your exposure mode setting determines how your camera will work with the light levels that it measures. Depending on the mode, the camera will either adjustments fully automatically, or leave you a certain amount of control over a photo’s final tonality. Meanwhile in manual mode, the meter has no effect on the exposure settings at all. What exposure modes do cameras offer and how are they useful? We’ll be answering these questions in today’s article. Exposure Modes Your choice of exposure mode determines how much of the decision on exposure settings (aperture, shutter, ISO) is left to the camera logic. The mode dial on an amateur DSLR (left) contains a wide range of automatic scene modes. Generally when starting out as a photographer, you can’t tell what settings a certain scene demands or what aperture/shutter/ISO will best fit your goals. Automatic Modes

PASM Modes: Get Your Camera under Control | Zonerama Magazine Among beginning photographers’ most frequently asked questions is: “How should I turn that little wheel?” In today’s article, we’ll answer exactly that question. You’ll learn how each mode works, when to use the P, A, S, and M modes, and what goals each mode serves best. And even if you already know your camera modes, then you can recommend this article to your friends to answer any questions they have about them… a sneaky way to get more time behind the shutter! Every DSLR has PASM modes, and they’re also found on mirrorless cameras and the more advanced compacts (especially the most advanced ones). The PAS modes are semi-automatic, so they each calculate at least some of the time and shutter settings automatically. P – Program This is a semi-automatic mode that is very similar to full-automatic mode—it’s the “programmed automatic” mode. The full (green) automatic mode uses the camera’s judgment for practically everything, and it doesn’t always get things right. A – Aperture Priority