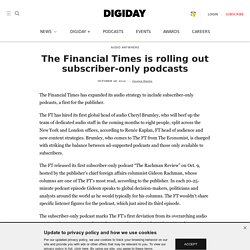 The FT has hired its first global head of audio Cheryl Brumley, who will beef up the team of dedicated audio staff in the coming months to eight people, split across the New York and London offices, according to Renée Kaplan, FT head of audience and new content strategies. Brumley, who comes to The FT from The Economist, is charged with striking the balance between ad-supported podcasts and those only available to subscribers.

The FT released its first subscriber-only podcast “The Rachman Review” on Oct. 9, hosted by the publisher’s chief foreign affairs columnist Gideon Rachman, whose columns are one of The FT’s most read, according to the publisher. Edison Research's Top Ten Findings from 2019 (so far) - Edison Research. Edison Research Director of Research Laura Ivey presented the following at the RAIN Summit in Dallas on September 24, 2019. 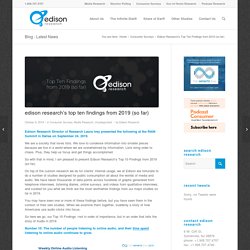 We are a society that loves lists. We love to condense information into smaller pieces because we live in a world where we are overwhelmed by information. Lists bring order to chaos. Plus, they help us focus and get things accomplished. Podcasting From Across The Pond - Bello Collective. How British podcasters are forging their own path in a US-led industry It was only once I arrived at The British Podcast Awards back in May, that I realised I hadn’t listened to most of the nominated shows. 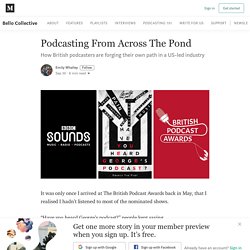 “Have you heard George’s podcast?” People kept saying. I didn’t have a clue who this ‘George’ was and most certainly hadn’t heard his podcast. Eventually, I gathered this wasn’t actually a question, rather the name of the breakout hit of the night. Is podcasting the way to open up African media? As a cultural force, podcasts have mushroomed over the course of the last decade. 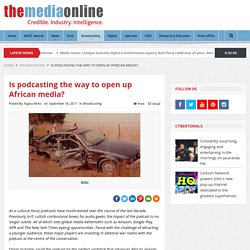 Previously lo-fi, cultish confessional boxes for audio geeks, the impact of the podcast is no longer subtle. All of which sees global media behemoths such as Amazon, Google Play, NPR and The New York Times eyeing opportunities. Faced with the challenge of attracting a younger audience, these major players are investing in editorial war rooms with the podcast at the centre of the conversation. Closer to home, could the podcast be the perfect yardstick that advances Africa’s already complex stories?

The African scene is of far lower rank than other regions in uptake. In the wake of Apple’s announcement that it will develop a new version of its podcast app that provides basic analytics to podcast creators, African podcasters have an opportunity to ride the wave of monetising the platform. What We Can Learn About Podcast Subscriptions In China. Written by Dana Sanchez Getting consumers to pay directly for content has been slow to catch on in the U.S., but platforms like Patreon are helping to make it easier for podcasters to get paid by fans. 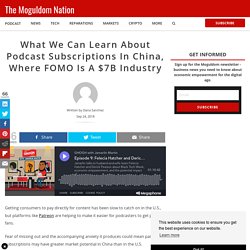 Fear of missing out and the accompanying anxiety it produces could mean paid subscriptions may have greater market potential in China than in the U.S. By comparison, the U.S. podcast industry mainly makes money through advertising, and double-digit increases are expected in ad spend in the coming years. China has podcasts that are free and ad-driven, just like in the U.S. but for some Chinese, the quality of free content is considered more entertainment than useful for real self-improvement, according to Marketplace, distributed by American Public Media. Here's why we're entering the Golden Age of Podcasts (in - Chartable.

Podcasts have been around since at least 2004. 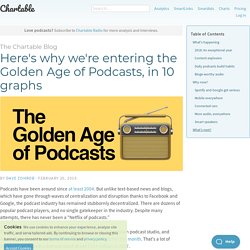 But unlike text-based news and blogs, which have gone through waves of centralization and disruption thanks to Facebook and Google, the podcast industry has remained stubbornly decentralized. There are dozens of popular podcast players, and no single gatekeeper in the industry. Despite many attempts, there has never been a “Netflix of podcasts.” That may change soon: Spotify bought Gimlet Media, a premium podcast studio, and Anchor, a podcast hosting platform, for $340 million earlier this month. 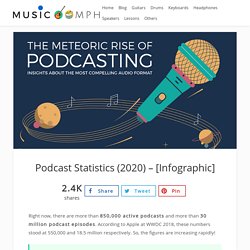 According to Apple at WWDC 2018, these numbers stood at 550,000 and 18.5 million respectively. So, the figures are increasing rapidly! Podcasts and New Audio Strategies? Audio is attracting new renewed interest from publishers as mobile listening grows and on-demand technology in the car disrupts linear radio listening. 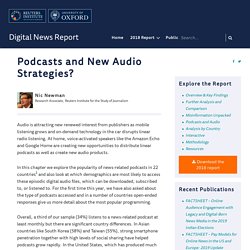 How 7 Companies Are Killing It With Branded Podcasts. What’s old is new again in marketing. 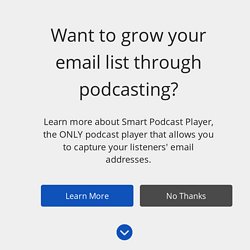 Nowhere is this more true than with radio and podcasts. Radio, which made waves (pun intended) in the early 20th century, has seen a resurgence in popularity thanks to its next-generation reincarnation known as podcasts. Podcasts, those audio and radio shows you can download to your smartphone, are on everyone’s minds these days, and for good reason. Approximately 98 million Americans are listening to podcasts every year and 56 million Americans listen to podcasts every month, according to the latest Edison Research study. 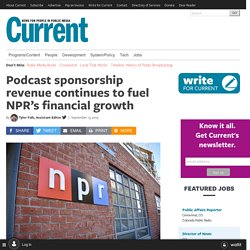 During NPR’s membership meeting Sept. 5, Chief Financial Officer Deborah Cowan told public radio station leaders that the network has budgeted about $55 million in corporate sponsorship revenues from podcasts in fiscal year 2020. That’s about $5 million more than the roughly $50 million total that NPR projects to bring in from podcast sponsorship by the end of FY19, which runs through this month, Cowan said.

10 Successful Branded Podcasts - Backtracks. Podcasts are a popular, compelling way for listeners to engage with companies, groups, and businesses of all kinds. Many podcasts are created by media companies, but non-media brands can also leverage podcasting to gain the benefits of audio content marketing. With its advantages of low barrier to entry and potentially high yield in customer captivation, podcasting is an excellent way for companies to share brand messages with customers. We should know, Backtracks is the world’s most advanced podcast analytics and measurement for brands and advertisers. 2018 IAB Podcast Ad Rev Study vFinal. Survey: Podcast consumption is growing in Germany – RAIN News. Podcast listening is on the rise in Germany.

A survey of more than 1,000 Germans by digital association Bitkom found that 22% of the nation is tuning in to podcasts, compared with 14% in 2016. For a dedicated 19% of the podcast audience, the shows are part of a daily listening routine, while 38% said they listen several times a week. Among ages 14-29 and ages 30-49, the rate of podcast listening is 30%, while it falls to 24% at 50-64 years old and just 4% for the over-64 group. Smartphones are the listening platform of choice, with 74% accessing shows on the mobile devices.

Almost half of podcast listeners (49%) said they tune in while traveling or otherwise on the move, making it the most common activity. Pourquoi le podcast redevient-il tendance ? Edison Research Podcast Consumer 2019. Podcast Popularity Across the Globe. Apple is now restricting Chinese language podcasts in China. Just as podcasting hits the mainstream in the west, China, which is also experiencing an audio boom, is seeing restrictions tighten around shows as evidenced by new curbs from Apple. This week, the U.S. tech giant has pulled a handful of Chinese-language podcasts from its Chinese Podcasts store, one of the few remaining channels for people in mainland China to find content immune from scrutiny by the country’s media regulators. The crackdown seems to be taking an incremental pace so far.

Three podcasters, including hosts of NickTalk and Two I.T. Three key South African podcasting trends, and why they matter to publishers. Podcasts have exploded in popularity in recent years, with an estimated 1 in 3 people globally listening to episodes every month. The hype around them has resulted in a flood of podcasts on the market, with Google claiming to have indexed over two million podcasts. It’s understandable given the promises many other technologies have made in the past that publishers may be hesitant about starting podcasts for their own brands. But there are actually numerous reasons why publishers are in an excellent position to launch a podcast and get ahead of the competition. The dawn of podcasting in Kenya. Is podcasting the way to open up African media? Best 10 South African Podcasts. Podcasts have rapidly become one of the most used (non-video) storytelling mediums of our age.

27 of the best podcasts for your commute in 2019. 10 Great African Podcasts That Are Worth Listening To. Growth Hacking an Audio Sharing Platform with Tian Sun, Vice President of Business Intelligence Center at Ximalaya App. Getting your app off the ground in China is tough. No matter what industry, internet companies not only need to have a great product, but they also must use data, analytics, and growth hacking to gain an advantage on the competition.