The collapse of the information ecosystem poses profound risks for humanity. For the last few years, scientists have argued that we’re living through a distinctly new geological age. 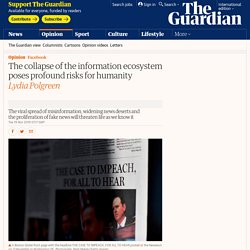 They call it the Anthropocene: a new age characterized by humanity’s profound impact on Earth itself as evidenced by pollution, mass extinction and climate change. Smartphone stress: 7 tips to keep it from ruining your life. In the past decade, smartphones have gone from being a status item to an indispensable part of our everyday lives. 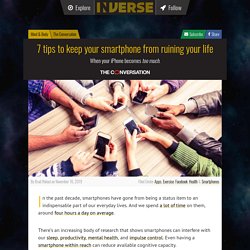 And we spend a lot of time on them, around four hours a day on average. There’s an increasing body of research that shows smartphones can interfere with our sleep, productivity, mental health, and impulse control. Even having a smartphone within reach can reduce available cognitive capacity. But it’s recently been suggested we should be more concerned with the potential for smartphones to shorten our lives by chronically raising our levels of cortisol, one of the body’s main stress hormones. 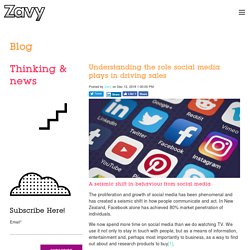 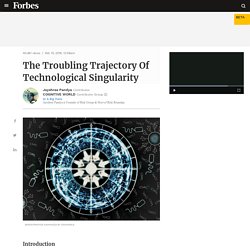 The first piece of AI-generated art to come to auction. AI artwork sells for $432,500 — nearly 45 times its high estimate — as Christie’s becomes the first auction house to offer a work of art created by an algorithm The portrait in its gilt frame depicts a portly gentleman, possibly French and — to judge by his dark frockcoat and plain white collar — a man of the church. 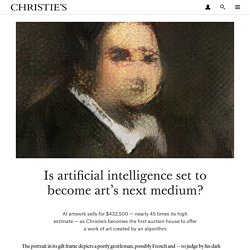 The work appears unfinished: the facial features are somewhat indistinct and there are blank areas of canvas. Oddly, the whole composition is displaced slightly to the north-west. Qz. The Great Cognitive Depression. Our cognition is under attackMickey McManus and Neta Tamir By Marco Annunziata and Mickey McManus The rise of complexity and the fall of decision-making. 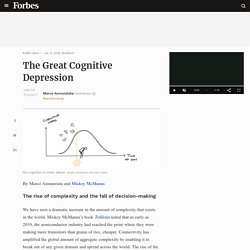 Get Ready. 2019 Predictions About Artificial Intelligence That Will Make Your Head Spin. A staff member stands near a computer as it participates in the CHAIN Cup at the China National Convention Center in Beijing. 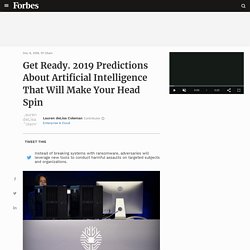 A computer running artificial intelligence software defeated two teams of human doctors in accurately recognizing maladies in magnetic resonance images on Saturday, in a contest that was billed as the world's first competition in neuroimaging between AI and human experts. (AP Photo/Mark Schiefelbein)ASSOCIATED PRESS While the hip, ubiquitous business buzzwords are cryptocurrency and blockchain, the truly formidable factor of what is being called the fourth industrial revolution is Artificial Intelligence. Whether praised as a panacea for greater business efficiency or the feared as the demise of humanity, Artificial Intelligence is upon us and will impact business and society at large in ways that we can only begin to imagine. Fasten your seatbelts. First, Ibrahim Haddad, Director of Research at The Linux Foundation says that there are two key areas to watch. Dr. Fortune. The trend of people cutting their home Internet connections in favor of wireless online connectivity is accelerating, according to the latest survey from Pew Research. 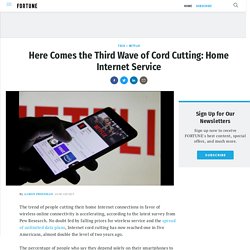 No doubt fed by falling prices for wireless service and the spread of unlimited data plans, Internet cord cutting has now reached one in five Americans, almost double the level of two years ago. The percentage of people who say they depend solely on their smartphones to connect to the Internet has risen steadily from 8% in 2013, to 12% in 2016, to 20% this year. Pew first highlighted the trend in 2015 when it recorded that the percentage of households with home Internet connections declined to 67% from 70% in 2013. That measure has since bounced around a bit, but stood at 65% in the latest survey from 2018, Pew reported. The trend marks the third wave of cord cutting over the past few decades. The latest wave of cutting home Internet could thwart the cable industry’s response to cord cutting of cable TV subscriptions.

Yuval Noah Harari Explains Why the Secret to Surviving the Coming Tech Dystopia is Not What You Think. In the future, Automation will disrupt your job and AI will try to hack your brain—and probably sooner than you think. 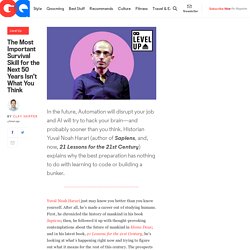 Historian Yuval Noah Harari (author of Sapiens, and, now, 21 Lessons for the 21st Century) explains why the best preparation has nothing to do with learning to code or building a bunker. Yuval Noah Harari just may know you better than you know yourself. After all, he’s made a career out of studying humans. First, he chronicled the history of mankind in his book Sapiens; then, he followed it up with thought-provoking contemplations about the future of mankind in Homo Deus; and in his latest book, 21 Lessons for the 21st Century, he’s looking at what’s happening right now and trying to figure out what it means for the rest of this century.

Future of Jobs 2018. As the Fourth Industrial Revolution unfolds, companies are seeking to harness new and emerging technologies to reach higher levels of efficiency of production and consumption, expand into new markets, and compete on new products for a global consumer base composed increasingly of digital natives. 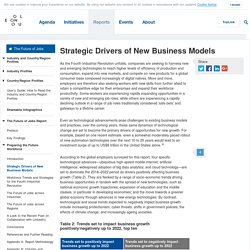 More and more, employers are therefore also seeking workers with new skills from further afield to retain a competitive edge for their enterprises and expand their workforce productivity. Some workers are experiencing rapidly expanding opportunities in a variety of new and emerging job roles, while others are experiencing a rapidly declining outlook in a range of job roles traditionally considered ‘safe bets’ and gateways to a lifetime career.

Even as technological advancements pose challenges to existing business models and practices, over the coming years, these same dynamics of technological change are set to become the primary drivers of opportunities for new growth. 1960s futurists predicted a shorter work week — they were so wrong. Www.forbes. Phones are creating a generation of kids with a complete inability to accept the state of boredom. I graduated high school in 2010. In the fast-paced world of technological advancement, those eight years create a vast difference between my high school experiences and those of the students I am teaching now. I'll admit: I texted during class sometimes, staring at my teacher, my thumbs working furiously on the buttons of my flip phone inside my desk.

How checking emails after work affects your mental health and relationships. How to Stay Safe on Public Wi-Fi. Academics created a periodic table of mind-blowing tech, and it's a handy guide to how the world will change forever. Homeland Security Says Photography Could Be a Sign of Terrorism. Instagram's Facade of the Perfect Life Has Made Us Lose Our Empathy. This could be the last year you'll want to buy headphones — a new audio technology is coming in 2019 that could make them obsolete. MIT Researchers Develop a Robot System Controlled by Brainwaves. Updated Privacy Policy for Being My Friend.

The Most Important Skill Nobody Taught You – Personal Growth. Before dying at the age of 39, Blaise Pascal made huge contributions to both physics and mathematics, notably in fluids, geometry, and probability. This work, however, would influence more than just the realm of the natural sciences. Many fields that we now classify under the heading of social science did, in fact, also grow out of the foundation he helped lay. Interestingly enough, much of this was done in his teen years, with some of it coming in his twenties. As an adult, inspired by a religious experience, he actually started to move towards philosophy and theology. If You Want to Remember Your Vacation More, Take Fewer Photos. We tend to think the joy of a vacation is the time you spend actually lolling on the beach or exploring a new city.

But according to happiness researchers, being at your destination produces only a fraction of the overall happiness a vacation brings into your life. WHO to classify 'gaming disorder' as mental health condition. "I'm not creating a precedent," said Dr. Vladimir Poznyak, a member of WHO's Department of Mental Health and Substance Abuse, which proposed the new diagnosis to WHO's decision-making body, the World Health Assembly. Instead, he said, WHO has followed "the trends, the developments, which have taken place in populations and in the professional field. " A diagnosis standard, the ICD defines the universe of diseases, disorders, injuries and other related health conditions. Researchers use it to count deaths, diseases, injuries and symptoms, and doctors and other medical practitioners use it to diagnose disease and other conditions. In many cases, health care companies and insurers use the ICD as a basis for reimbursement.

He said there are three major diagnostic features or characteristics of gaming disorder. It’s a little scary how smart Google’s DeepMind just got. Oh joy – Alphabet Inc.’s AI subsidiary DeepMind has taken another step forward in understanding the world the way humans do. The company that has previously made headlines for developing a system that teaches AI how to play video games — correction, how to crush it at video games — is now better able to “see” and understand a space and environment. DeepMind’s scientists have built an artificial vision system that can take something like a two-dimensional photo and from that construct a 3D model of a scene. London-based DeepMind published details about this new system called the Generative Query Network in the journal “Science” today. The company also walked through some of the details on its own blog, explaining how the system can take images of a scene and build a 3D view from different viewpoints.

“Today,” DeepMind notes via the blog, “state-of-the-art visual recognition systems are trained using large datasets of annotated images produced by humans. Youtubers with millions of followers are dropping out, citing stress and burnout from algorithm kremlinology. Six reasons why social media is a Bummer. The Amish understand a life-changing truth about technology the rest of us don’t. Google makes it easier to delete the search, browsing and viewing history it keeps on you. Google is making it easier to see the search, browsing and YouTube viewing history it keeps on you, to delete any items you don’t want included, and to stop the company from logging your activity in future …

Alexa and Siri Can Hear This Hidden Command. You Can’t. What the Mona Lisa Tells Us About Art in the Instagram Era. Disney's 'Force Jacket' prototype allows you to feel every VR punch. The End of Software – EEJournal. A New Kind of Memory Could Make RAM and ROM Obsolete. Like peanut butter and jelly, like salt and pepper, like that seemingly perfect couple you love (to hate), the two dominant types of computer memory truly complete one another. How To Block All The Companies Tracking You On Facebook. 10 books of the Intellectual Dark Web you should know. Michio Kaku picks five books to help you understand the future.

On Flipboard. On Flipboard. Breathe is a smartphone ghost story that knows where you live. The Mind Meld of Bill Gates and Steven Pinker. Mashable. It’s not you, it’s your device—how to take a break from tech. 10 Laws Of UX, Illustrated. The Era of Quantum Computing Is Here. Outlook: Cloudy. Five principles for a successful innovation lab. According To Peter Diamandis And Ray Kurzweil These Are The Most Dangerous And Disruptive Ideas. Post-work: the radical idea of a world without jobs. The AI glossary: 5 artificial intelligence terms you need to know. Web Literacy for Student Fact-Checkers. These Will Be The Top Jobs In 2025 (And The Skills You’ll Need To Get. Digital literacy 1: What digital literacies? Unrealengine. Technology, Media & Telecommunications, Annual report. Technology, Media & Telecommunications, Annual report.